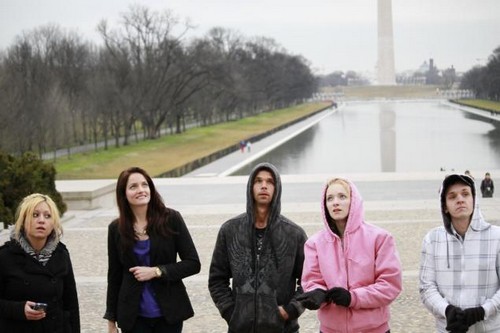 BREAKING AMISH: BRAVE NEW WORLD continues on TLC tonight with a new episode called, “A Brother’s Secret.” On tonight’s show the group finally make decisions about what’s next. Did you watch the last episode? We did and we recapped it here for you!

Breaking Amish chronicles the lives of the cast, Jeremiah, Kate, Abe, Rebecca and Sabrina as they endure the realities of living in new surroundings and face new situations involving work, friendship, romance, and lifestyle. It also includes the drama that develops between cast members as they undergo various experiences.

On last week’s show Sparks fly when Katie Ann decided to get a makeover and picked Kate over Abe and Rebecca to go with her. Sabrina tried to find her long lost family, and herself, in Puerto Rico with Jeremiah along for the ride. And Abe finally went bull riding.

On tonight’s show Jeremiah comes back from Puerto Rico with a heavy heart and Sabrina makes a surprise decision about her future. An unexpected visitor from back home shows up to check on Mary and Katie Ann. And the group finally make decisions about what’s next.

Starting where they left off Kate is still upset about Abe and Rebecca and the couple feel like that Kate stole a bonding moment from them.

Later, Rebecca talks to Kate by herself. She admits she’s jealous of Kate’s career and good looks. Rebecca also admits she’s insecure and that she felt Kate was the most English out of all of them. Rebecca talks about her frustrations including just being a mom and how that limits her. Kate hears all of this and does her best to comfort Rebecca.

Rebecca and Abe do take Katie-Ann shopping. The family outing is going well and the whole family enjoyed themselves.

Sabrina and Jeremiah are back at the hotel. She’s thankful he came with. It’s time to go home but Sabrina has decided to stay in Puerto Rico. She wants to explore her roots. Jeremiah tries to convince her to leave until she runs off and leaves him. Jeremiah feels like Sabrina ditched him and it hurts because not only does he feels responsible for her but he only came with her for support.

Rebecca talks to Abe. She doesn’t want to stay in Florida. Abe can’t leave because his mom sacrificed a lot to be near him but Rebecca wants it to be only the three of them.

Jeremiah make it back home and then has to answer “where’s Sabrina?” He tells their friends that Sabrina decided to stay in Puerto Rico. He felt bad for leaving her but didn’t want to miss his flight. After worrying, they decide to laugh when they notice Jeremiah’s new facial hair.

Mary’s other son came to visit, Andrew. He just came out of prison and decided to see his family. He sees Katie-Ann and tells her he barely recognizes her. Andy thinks Abe and Rebecca played a part in this because Katie- Ann couldn’t have thought of it on her own. His mom asks him to leave. She doesn’t feel like he was being respectful. He leaves only to go see Abe and Rebecca.

Abe goes to the door to speak to his brother. Rebecca begins to get mouthy with Andy so Abe asks her to go out back. Abe says he really was concerned about their family he would stay down there to look out for them. Andy tells his brother he was the one that forgot family. The real crux of the matter is that Andy claims he slept with Rebecca but Rebecca denies it and refuses to be around him and to have Abe around him.

Abe goes to his mom and tells her that he and his family is moving back. His mom feels that its Rebecca’s idea and wants him to think for himself. But he tells her that he has to think about his family. She tells him that it hurts because she essentially came down to Florida for him. Abe can understand but he knows Rebecca wants to go back.

Jeremiah is thinking about Sabrina. He’s upset that he let her burn twice now.

Kate is letting go of being Amish and ready to be English in New York. She even asks her “friend” about possibly moving in together.

Katie-Ann is strong in her resolve of being English while Andy has to come to terms with his old life turning their backs on him.

In a surprise move Sabrina comes back. She missed her friends too much. She liked her family and is glad to know her history. After the impromptu get together with everyone, Sabrina speaks to Jeremiah alone. She apologizes for what she did which shocks Jeremiah. Yet when she admits this is where she’s happy, he can’t help but to hug her.

The season ends with all of them setting off fireworks.

Kate is still modeling and is earning her GED.

Sabrina is still contact with her family and she’s been seeing Jeremiah off and on.

Abe and Rebecca decided on buying a house in Pennsylvania with a room for Mary and Katie-Ann.

Katie-Ann hasn’t decided yet whether to be English or Amish but she does go to the beach as much as she can.

Mary moved back to Pennsylvania and is currently being shunned by her community. Although she continues to support her children.