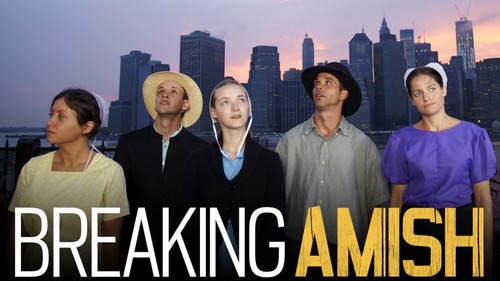 BREAKING AMISH: BRAVE NEW WORLD continues on TLC tonight with a new episode called, “The Shunning Truth Part 2.” On tonight’s show the participants on “Breaking Amish: Brave New World” continue with part 2 of the tell-all and tensions rise as more shocking secrets are revealed.. Did you watch the last episode? We did and we recapped it here for you!

On last week’s show the cast of Breaking Amish: Brave New World were back and ready to set the record straight in an explosive two-part reunion special hosted by NBC’s Michelle Beadle. Plus, sparks flew when the cast came face to face with two mystery guests.

On tonight’s show in this second hour of our two-part reunion special, host Michelle Beadle dives deeper into the complicated relationships the cast has with each other, their own families, and two surprise guests. Tensions rise as more shocking secrets are revealed.

Jeremiah’s ex-girlfriend, Kim, has been brought onstage to now tell her side of the story. Despite being turned into rivals by Jeremiah, Kim and Sabrina are now getting along. When Michelle played back the footage, the two women have come to terms with their past are more willing to see how Jeremiah played them against each other. The only person Kim still has a problem with is Jeremiah.

She’s no longer up in his face but she calls him out for trashing her on the internet. But when Jeremiah tries to bring up false accusations Kim brought against him and was arrested for, Sabrina comes to her defense.

Later after Kim leaves, Katie-Ann comes up onstage. Katie-Ann went back to the Amish community. She says she wants to re-give it a try. While she’s onstage Michelle brings up the infamous makeover.

Kate is embarrassed after seeing the footage of when she completely cursed out Abe and Rebecca. Michelle asked why she was so mad and Kate tells everyone that she truly believed it was selfish on the young couple’s part to tear down Katie-Ann. Abe explains that when he first went shopping for English clothes, he would have given anything to have a family member there and that’s why he was angry Katie-Ann only had Kate. Katie- Ann wasn’t fully comfortable in her new get up but she did like it.
The family drama isn’t over yet. Abe and Rebecca don’t have anything to do with any of his brothers. Abe claims they bring too much drama and he doesn’t want that around his family. Andrew thinks Rebecca is controlling Abe. It wasn’t until those two got together that Andrew feels like Abe pulled away from everyone. Michelle tries to get Abe to engage Andrew but he refuses.

It’s only when Michelle turns the conversation back to Katie-Ann do the brothers engage. There was situation where Katie-Ann wanted to get her birth certificate in order to apply for her driver’s license but Rebecca and Abe were withholding it. Rebecca and Abe storm off but Michelle asks for clarification. Jeremiah was living next door at the time and tells everyone how controlling Rebecca was being. Andrew also mentions how Rebecca had called Katie-Ann a bitch after she called the cops on the couple. Michelle tries to get Mary’s opinion but Mary replies “No comment”.
Finding new grounds, Michelle question Sabrina about her search for her identity. Sabrina is open about now being comfortable in her own skin. She’s come to terms with being adopted and even Spanish. Michelle then tells Jeremiah about how she thought it was sweet he volunteered so quickly to go with Sabrina to Puerto Rico. It was almost uncharacteristic.

Also what happened after Sabrina returned from Puerto Rico. It appears the two slept together but is it really over between them?

Abe and Rebecca come back to the stage. Before they discuss things, Abe asks his mom to leave the area. He says he doesn’t want to argue in front of her. Once Mary leaves the stage, the three air their grievances. Abe admits he wants his brother back and the two discuss the rumors. Rebecca now says she slept with Andrew the one time. All the other times were just rumors started by her ex-husband.

Abe doesn’t feel that’s the rule of the problem. He says it’s because every time the two supposedly make up, Andrew always rakes up things from the past. The brothers agree to try again but only after its announced Abe is having another baby and Andrew is going to LA to film next season.

Everybody is in a better place than when the season started except for Mary who is being shunned for the second time. But that’s not stopping her. In five years she sees herself in a van with her feet up listening to her music.