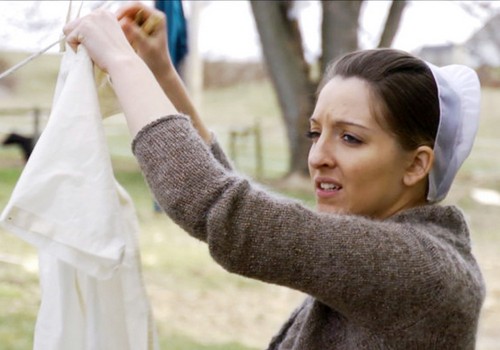 Breaking Amish: LA continues on TLC with a new episode called, “Exodus.”  On tonight’s show Lizzie can’t keep her secret hidden much longer.  Did you watch last week’s season 2 premiere episode?  If you want to get caught up we have a full and detailed recap here for you.

On tonight’s show the cast members make their leap of faith and head to LA in promise of a new world. When they arrive, LA proves to be both exhilarating and exciting, but the vices of temptation aren’t far behind. Meanwhile, Lizzie can’t keep her secret hidden much longer.

Flee is the best word to describe this exodus. Luckily Lizzie and Iva find each other at the airport. That makes their trip seem less scary and the arrival of Matt brings new mysteries. Like why is he traveling with two sewing machines?

Iva, our baker, was trying to travel with a tub of lard when TSA stopped her and gave her a baggy instead. The Amish were raised not to be wasteful and she could have really have used it to bake cupcakes.

Betsy and Devon have a rough airplane ride. Too many dips and bumps make Betsy nauseous. After that ride they become the first two to enter the house. They go exploring and trying to figure out all the electrical things.

Iva, Lizzie, and Matt had some trouble leaving the airport. They didn’t know how to get a taxi. They were fortunate though to find a Good Samaritan to help them. The two groups meet at the house at the house and everyone can agree their new home is beautiful. What Iva and Lizzie agree on is that Betsy seems nice yet she gives off a vibe. A weird person vibe.

The group goes outside to explore the area. They’re having fun and enjoying physical activities and they can’t understand why Lizzie isn’t participating. She doesn’t want to admit to her pregnancy yet. She did just meet these people and gossip spreads fast in the Amish community.

They later moved to a nightclub hoping to enjoy themselves that is until Iva is refused admittance. She tries to tell the bouncer she won’t drink but that doesn’t change her being 19. The girls decide to leave with Iva. Lizzie chose to leave more because she couldn’t drink with the baby over supporting Iva. The guys stay and drink it up.

Back at home in Lancaster, Lizzie’s brother Samuel has been struggling without his sister. He also has been doing some of her chores. He now feels it would be best for him to go and save his sister and so he decides to go to LA.
Matt has taken it upon himself to write house rules. He hasn’t shown his family these rules before he criticize Iva wanting to get a tattoo. Lizzie comes to her defense. Matt then brings up his rules and shows them to the house. Rules like “celibacy” and “no Dutch” doesn’t go over well. The other people feel Matt created these rue to more check himself than them.

Samuel sneaks off in the middle of the night to go to LA. Supposedly for Lizzie.
Moving on past the rules fiasco the group goes to the amusement park. Everything is going well up to Lizzie deciding not to be on the roller coaster. Iva knows something is up and questions Lizzie over possibly being pregnant. She admits to the truth and no one gets judgey minus a small thing with Matt.

Still no one was prepared for Samuel to storm in. He sees Lizzie sitting with Matt and goes off on everyone. He tries to get a hold of her but the other housemates go to protect her. Lizzie refuse to leave and Samuel swears he’s not leaving without her.
If that’s how he freaks out about her living with guys then how will he react to her pregnancy?