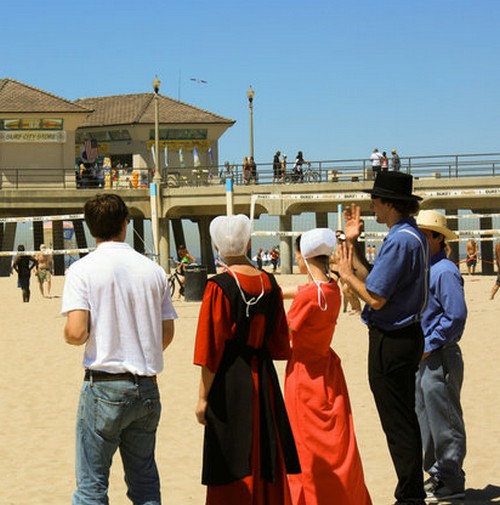 Breaking Amish: LA continues on TLC with a new episode called, “Metamorphosis.” On tonight’s show All eyes are on Betsy as her behavior becomes increasingly suspicious. Did you watch last week’s crazy episode? If you want to get caught up we have a full and detailed recap here for you.

On last week’s show an unexpected visitor entered the house demanding to see Lizzie causing her housemates to smooth over the situation. Meanwhile, the house got even more crowded when another late comer arrived to join the group and starts up trouble.

On tonight’s show Andrew’s arrival lights a fire and the spirit of rebellion is contagious. The time comes to take the plunge and trade in traditional Amish clothes for a modern English makeover. It is all cause for celebration, until things take an unexpected turn.  All eyes are on Betsy as her behavior becomes increasingly suspicious.

The fight between Andrew and the house is just getting warmer. Andrew can’t physically fight anyone for now. He’s still on probation after all. Although their early start is horrible, Andrew sees the error of his ways. Well after he freaks out Iva by showering with the door open and then rest of the girls by walking around with nothing but his towel.

He came to the kitchen and semi-apologized to everyone for acting like a douche. He says he’s been without family for a while. This is true. Rebecca has pretty much destroyed all of his relationships back home. So to start this more peaceful second meeting he invites them to go out and party with. Luckily Samuel agrees. He agreed more to watch over Andrew but Andy doesn’t know that.

The boys return after having some drinks and the house appears to be clear of most of the tension. Yeah Iiva claims she keep her door locked but otherwise Andrew is now flying under the radar. The face that remains a target is Betty. The guys, Andrew included, are remaining hung up on the whole witchcraft accusation. It’s not as if they’re discreet. Betsy knows they’re talking about her and how long she’s willing to put with it remains a mystery.

However she gets to take her mind of it when everyone decides to get a makeover. The girls get their hair and make-up done and the guys get to experience some odd fashion choices. All except Matt who claims he’s an expert on what fits him best. The boys enjoy their haircut. Samuel described getting all tingly when the female barber massaged his neck. The shop owner feared Samuel might have even gotten a boner.

Everyone is enjoying their new haircuts and there is appreciation among the sexes. Yet Betsy is uncomfortable and she feels now is the time to bring up hoe left out she’s been feeling. Betsy is trying to describe how hurt she feels when Iva shoots her down by coldly claiming Betty is just jealous. Lizzie is the one to go and comforts Betty. Seeing her tears, she’s no longer going to hurt her like Iva.

Later after the house is again calm these begin to get weird. Something happened between Devon, Betsy, and Iva. Andrew is actually shocked when he heard what happened. But what happened?

In the meantime Lizzie and her brother go in for her first check-up. It’s different. For one Samuel was being stubborn about the ultrasound pictures because it’s against their religion. Lizzie is able to get him to back down though and Samuel gets to see the baby for the first time with Lizzie. It hits me really hard. He knows Lizzie won’t be able to do it alone so he’s going to try and find work. He hops into the back of a pickup truck to labor along with some immigrants who were fearful he was a spy sent by immigration.

It’s a new experience with the Latinos. For one he can’t understand them and for another it’s completely working with them over his fellow Amish community. Surprisingly he makes a friend who was kind enough to invite to a party…in South Central. He also invites any friends Samuel would like to take with him. Returning to the house Sam invites the guys and only Andre declines. He said he didn’t want to risk his probation. Andrew can be smart when he chooses.

Samuel certainly is enjoying himself at the party. It takes a police warning to get him off the roof. Afterwards he got frisky with a girl he only recently met. It is highly possible that he may have lost his virginity as well. For the moment though he refuses to kiss and tell.

Devon isn’t as lucky. He met a girl last night and made a date with her the next day. The girl doesn’t show. Still he won’t let that bother him and calls up Iva to invite her out. They have a good lunch. Iva didn’t know it but Devon is considering her pity lunch as a date.

Minus Betsy and Andrew the rest of the gang goes out to dinner. They don’t know that their missing out on Betsy practicing witchcraft. Things get worse in next week’s promo. For the moment Betsy’s witchcraft is a big deal but next week we finally learned what happened between Iva, Betsy, and Devon. It leads to Iva calling the cops.