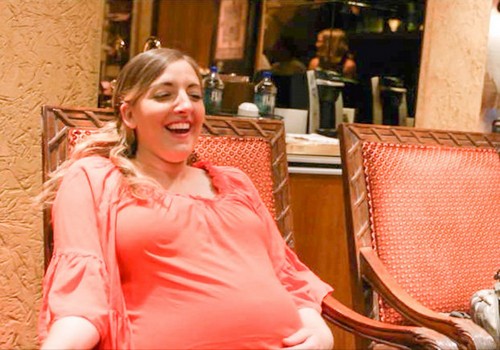 BREAKING AMISH: LA continues on TLC with a new episode called, “Judgment Day.” On tonight’s show a surprise baby shower for Lizzie turns sour from Devon’s actions. Did you watch last week’s crazy episode? If you want to get caught up we have a full and detailed recap here for you.

On last week’s show the group took Las Vegas by storm, but it’s not all fun and games when Matt was wary of temptation. Betsy was on a mission to expose the truth and had evidence that will change everything.

On tonight’s show when Iva’s fiance Sam says goodbye, simmering tensions boil over with the group. Matt starts a promising internship with a prominent fashion designer and a surprise baby shower for Lizzie turns sour from Devon’s actions.

After last week’s explosive turn of events, everyone is still dealing with the repercussions. The group ditched Devon in Las Vegas. When he returns home he finds his roommates waiting for him. They want Devon to clear the air but he feels like he only wronged Betsy. He basically did what Iva told him to do because he has a thing for her.

Andrew can’t understand why Sam won’t just hit Devon. The next day Sam has to return to work so Andrew finally pushes him to address Devon. He swears and points his little girlie finger but that’s it. Andrew is embarrassed for him and Devon doesn’t get why Sam is mad at him. He tells Sam the only person he should be mad with is Iva. She was the one that cheated and then lied to cover herself. Yet Sam is insisting he’s going to marry Iva.

As he and Iva leave, Devon is the one to follow them. He won’t be anyone’s scapegoat anymore. He gets into Sam’s face and tells him he should just dump Iva. Sam feels like he’s being pushed and still doesn’t do anything to Devon. The cat grows bored and goes back into the house. Meanwhile the mouse goes comfort Iva. She’s conveniently in tears now.

The tears only serve to piss Betsy off. She was trying to forgive Iva but the tears pushed her too far. She shouts at Iva to cut it out. She’s only crying to get pity from Sam. Like an idiot Sam starts cursing at Betsy for hurting Iva. That’s how brainwashed he is.

Around the other guys Betsy explains how if she went to jail for what Iva claimed no one would have comforted her over her tears. The Amish traditions of forgiving can only go so far. Andrew gets it. He’s been to prison and it’s not a walk in the park. Although Matt did promise he would have visited.

Iva returns to the house and in a tearful apology she tells her roommates she’s very sorry and wishes they could all be friends again. Lizzie, Iva’s former best friend, won’t be as forgiving as Sam. She was brought into Iva’s lies already and it was the same fireworks with the tears. The one saving grace for Iva is that she went to the police and dropped the charges. She believes that’s all it would take for the house to forgive her.

The drama is dying down and Matt decides to escaping the leftovers by focusing on his fashion career. He meets with a designer who happens to be gay and the guy is able to get where Matt is coming from. Matt is a little naïve but he has the heart. He’s given the opportunity of creating his own line for the designer to critique.

Lizzie’s escape involves her brother Samuel letting loose. They go to a dancing yoga class. Surprisingly Samuel really does get into it. He’s right next to her dancing the afternoon away. Lizzie just thought he was being open-minded when it looks like Samuel may have the hots for teacher. No wonder he did best to portray his hip movements in a positive light.

Andrew has to head back to Pennsylvania. He has to meet with his probation officer. He feels like his Amish upbringing is what makes him face up to his mistakes unlike Devon who had gone surfing as much as he can to escape the house.

Iva for the most part has escaped through her internship. She got a job at a bakery. Her new boss thinks she’s so sweet.

The house is preparing to set up a surprise baby shower for Lizzie. Samuel is helping Iva bake, Matt is creating baby clothes for both girls and boys, and Betsy is setting up flowers with Iva. They’ve all put the garbage behind them for Lizzie. The only person not helping is Devon.

Lizzie loves her baby shower. She’s not sure they’re doing it right but she still loves it. As a gift from her brother he wrapped one of the sexes of baby clothes. Lizzie hadn’t found out the sex of the baby. She wanted Samuel to know though. When she unwraps her gift she found out she was having a boy.

The downside at the shower is Devon. He thought to be funny and give Lizzie a prank gift. No one found it funny and then when they all sat down to eat he kind of pretended not have manners. For example he out of the dish. Samuel is ticked Devon seems to want towreck the baby shower for his sister. While Devon thinks this is a party and they should all liven up.

When Andrew returns, Samuel goes to talk about Devon. They both feel like Devon didn’t act like a man with the whole Iva/Betsy drama. He’s worn out his welcome. They go to Devon and confront him. They tell him he has fifteen minutes to get out.

Devon is again trying to explain it was all Iva but he never once owns up to it with everyone else. Devon then tries to get Matt to stand up for him but that’s a no go. Matt of all people wants Devon to man up. The guys get Devon to leave but as he’s walking away back at the house Betsy tells the guys how Devon slapped her once. Andrew can’t take it he goes after Devon. He doesn’t like women beater.

Andrew and Betsy go and find Devon. Devon claims the slap was in his own words a friendly bitch slap. He feels the girls are using Andrew the same way they used him. Andrew makes it known Devon is never to lay hands on another woman again.

After she heard Betsy’s story Iva thought the other girl mad it up. She thinks Betsy wants the guys to fight over her. Seriously?