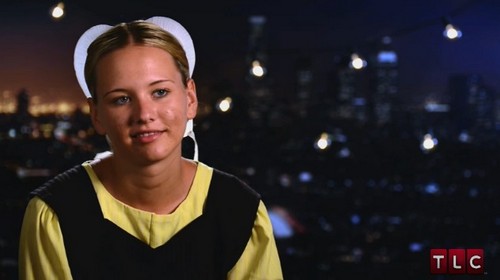 BREAKING AMISH: LA continues on TLC with a new episode called, “Into the Fire.” On tonight’s show Matt must deliver the goods in his first fashion industry presentation.  Did you watch last week’s crazy episode? If you want to get caught up we have a full and detailed recap here for you.

On last week’s show when Iva’s fiance Sam said goodbye, simmering tensions boiled over with the group. Matt started a promising internship with a prominent fashion designer and a surprise baby shower for Lizzie turned sour from Devon’s actions.

On tonight’s show Devon’s exile from the house prompts Matt to preach forgiveness, to a skeptical crowd. Betsy learns surprising news from a genealogist that leads to a spontaneous trip to Mexico. And Matt must deliver the goods in his first fashion industry presentation.

RECAP: Matt returned to the house only to find Andrew and Samuel threw out Devon. He’s upset with them and tells them that’s not how Christians are supposed to act. Strangely enough Iva and Betsy team up to tell Matt if he wanted to defend him then maybe he should have been here when everything was going down. Then Betsy, the very same person he once championed, tells him not to get all preachy and that he’s making her lose it. As if she could hit him.

Maybe some of her obvious misplaced anger can be dampen by finding out about her biological family. She found out she has Mexican ancestry. But the bombshell came after finding out some of her ancestors got caught up in the Salem witch trials. It seems certain things are genetic or that’s what Betsy tells herself.

While Matt who always forgives is the guy taking Betsy to Mexico. She wants to explore her culture and luckily Iva won’t be going. Betsy is still angry with her and it’s taken her forever to realize it. Samuel though joins the two for their road trip.

The trip was fine and they were enjoying themselves but Betsy does love the occult. She sees a group of lighted candles and swears the spirits are calling her to it. She uses the candles to light incense or wands, don’t really know what they are, when Matt comes and sees her. He thought she had put this behind her and it looks like searching her family history has reopened that door. Matt know she’s troubled and odds are he would have stayed home to continue with his own fashion line if he knew she become this stubborn.

Devon, on the other hand, is back home. Not LA! He moved back in with his parents which wasn’t easy. His father was deeply angered with Devon for leaving and got rid of some of his stuff. He also would have forbidden Devon to move back in if weren’t for his wife being more forgiving. Still Devon is unsettled. He didn’t like the “manipulation” of the English world but he’s not as satisfied to be back in the Amish world.

Back to enjoying Mexico, the gang has begun partying. Samuel was getting really drunk so he decided to leave before even Betsy got more appealing. Later Matt and Betsy find him wondering the streets. It’s time to return to the U.S.

At home things are looking good for Matt and Iva. They’ve both had been given wonderful opportunities to explore their passion. Matt is going to meet with his new designer friends’ buyers and Iva got to see a large and fully functioning bakery. They’re both literally in the happiest place in earth. Well, according to them.

However it looks like Matt may have to learn rejection. He was able to criticism from the designer, Colin, and they even formed a good acquaintance despite having different views on homosexuality but his buyers are more critical. To cheer him afterwards a couple of the guys have taken Matt out to have some fun. They went to a gay club.

The cameras did follow Matt into the club and later the cameras at the house caught him confessing to wanting to delete certain video. What’s on the video, Matt?

It isn’t too long before Colin goes to one of Colin’s party. Colin kids around with him and tells everyone Matt put some money down on a male stripper. Yet in a moment of seriousness Colin says Matt was wonderful to work with and he can’t wait to have some of Matt’s designs in his closet.

The housemates are getting ready to return home. Prior to that they’re going to say goodbye with one last bonfire on the beach. The missing housemate, Devon, wrote a letter to Iva telling her he forgives her I his spare time. His roommates also get meaningful. They all have to face to some demons when they get back home. Like Andrew. He’s still desperately in love with his ex but is scared that Rebecca’s lies ruined that relationship forever. Or Lizzie telling her family about her pregnancy. They have to be brave.

Samuel got to check one thing off of his list. He finally lost his virginity… to Betsy!