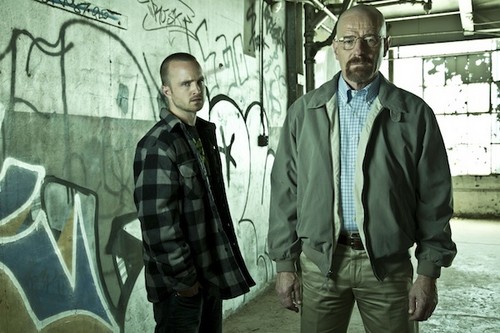 Tonight’s was the highly anticipated summer premiere of BREAKING BAD and it did not disappoint.  The ending was crazy creepy, Walter at his best when he said to Hank, “If you don’t know who I am, you should tread lightly.”  If you are curious about next week’s episode we have managed to get our hands on a sneak peek video and some spoilers to whet your appetite for next week’s episode 10 “Buried.”

On tonight’s episode we open up where we left off at the season 5 break – Hank is in shock he knows Walter is Heisenberg.  He rushes his wife out of Walt’s house and tried to process what he had discovered.  Hank is so distressed he ended up crashing his car into a fence.   Walt discovered his gift from Gale was gone and he found a tracking device under his car.  Walter realized that Hank knows.  Jesse felt guilty and tried to get Saul to give his money away.  Jesse felt that Walter feels no remorse for the deaths.  Walter confronted Hank and told him his cancer is back, he lets Hank know there is no need to prosecute him because he will be dead in six months.  Hank tells him to rot.  Lots happened and if you missed the episode you can read our full and detailed recap, right here.

Spoiler alert: If you’re one of those people who doesn’t like spoilers, stop reading now! We have some juicy spoilers for you about the season 5 episode 10 of AMC’s “Breaking Bad”

Official Showtime synopsis of next week’s episode:  Skyler’s past catches up with her while Walt needs to cover his own tracks. Jesse continues to struggle with guilt. (Written by Thomas Schnauz. Directed by Michelle MacLaren.)

On next week’s show Jesse continues to struggle with his guilt.  Also what is going to play a part in next week’s episode is Lydia.  On episode 9 Lydia stopped by the car wash and tried to get Walt to come back and cook, she lied that the quality was not the same, at the time Walk told her it was not  his problem.  Creator Vince Gilligan mentioned on Talking Bad tonight that – that will play out more next week.

It looks like Walt is not happy and he says, “You better not be saying, what I think you’re saying?”  I wonder if that is directed at Hank.  Meanwhile Hank is starting to realize that he could be the man that catches Heisenberg.

Jesse realizes that Walter is a monster.  Although Walt tried to convince Jesse that he didn’t kill Mike, Jesse doesn’t believe him.  Next week Walt will be trying to find Jesse and tells Saul to find him too.  If Walt thinks Jesse does not believe him he may try to kill Jesse.

Breaking Bad episode 10, “Buried” airs on AMC on August 18th, 2012.   Check out the preview video below of episode 10 and let us know in the comments below what you think!  Are you enjoying season 5 of Breaking Bad?