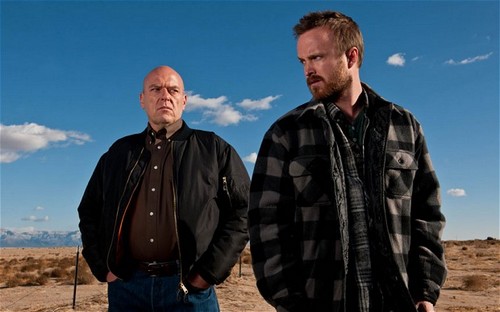 On last night’s episode 12 of BREAKING BAD Walter cames home to find Jesse’s car parked in his front lawn. Walter goes over some hedges and into his backyard, he pulls out a gun and he peeks inside and then opens the back door ever so slowly. Walter notices the gasoline can sitting in the floor and then realizes the carpet is soaked when he steps on it. Walter calls for Jesse and receives no reply. Walter heads down the hall going room by room, the one at the end is closed, he opens it to find no one is in it. Walter heads outside to look for Jesse, he goes over to the car and finds a CD, Walter takes it and then slams the car door.

Walter has one of Saul’s guys go to his son’s school to make sure that Jesse didn’t go after Junior. Walter has some cleaners attempting to take care of his gas soaked carpet(good luck with that). Walter decides to give Jesse a call but he gets his answering machine, Walter tells Jesse he would like to talk with him and that they can fix this ( yeah, by fix Walter probably means a bullet to Jesse’s head). Back inside his house Walter realizes just how bad the smell really is, the carpet cleaner tells him it’s hard to get that odor out of carpet. Time for a new carpet and new padding. Walter goes outside and pours gas on some of his clothes, he then puts the gas can in the garbage, second guesses that and takes it out and puts it in his neighbors garbage instead. Walter then decides he still needs it,so he gets it out and pours some of it in his car, then for the final time he puts it in his neighbors garbage. ( I don’t see why it even needs to be bothered with, let alone tossed, besides Jesse he is the only one that knows what it was going to be used for).

Skyler comes home and instantly notices something wrong with Walter’s car. Skyler walks in the house and notices the gasoline smell. Walter lies and tells her that when he was on the way to the drugstore he had a gas pump malfunction (a.k.a known as Jesse)

Walter tells her when he got home he took a shower and when he got out he realized that the clothes he had discarded on the carpet had gotten gas all over it. Junior tells Walter to just tell the truth. Walter tells them they can’t stay there. Junior wants to stay with Uncle Hank and Aunt Marie. Walter thinks a hotel would be better. Skyler and Junior go pack their bags.

Walter is sitting in Saul’s car and notices his beat up face. Saul tells Walter that they can’t find Jesse. Walter thinks that maybe Jesse called back Saul’s guy. Saul tell him it isn’t possible because his guy doesn’t take second chances. Walter tells Saul he needs to explain to Jesse why he poisoned Brock. Saul thinks Jesse has a intent to kill. Walter tells Saul to not think like that again and to find Jesse. Walter gets out of the car and heads over for some ice.

When Walter gets back to the room Skyler ask how Saul is. Walter wants to know if she was spying. Skyler tells him yes. Skyler also tells him she knows his gas pump malfunction story is bs and that she wants to know what is really going on. Walter tells her that going to the hotel is just a precaution because Jesse is upset about something he did. Skyler ask if Jesse was going to burn their house down. Walter says yes but that he changed his mind (I think she can figure out that last part). Walter tells Skyler that Jesse has some emotional problems and has a tendency to go off the rails, and that Jesse is only a danger to himself. Skyler ask if he has ever hurt anyone before. Walter tells her no. Skyler tells him that she knew somebody would want to hurt them someday and that Walter needs to take care of it. Walter ask Skyler how much she has been drinking. Skyler seems to think not nearly enough ( that’s what the wet bar in room is for honey).

We see the same scene we saw with Jesse at the end of last weeks ep, only in this one Hank comes in. Hank tells Jesse to put down the lighter that he doesn’t want to kill him. Jesse tells Hank that Walter can’t keep getting away with it. Hank puts the gun down walks over to him, takes him out to his car, straps him in and drives away from Walter’s house. Jesse ask Hank If he is being arrested. Hank tells him if he will be his witness ( his golden goose) that things will go easier on him.

When she gets home Hank tells her they have a guest. Marie sees Jesse sleeping on a bed. Marie just walks away. Hank tells her that it would be safer if she leaves. Marie decides to stay and also decides she wants to heat up some lasagna. Hank listens to the message that Walter left on Jesse’s phone ( you would think he would need a password for that).

Walter has a moment with his son out by the pool. Before Walter heads back in to the hotel room he makes a call.

Jesse walks up at Hanks house. Jesse gets up and opens the door and Marie ask him if he wants some coffee. Marie hands a cup of coffee to Jesse. Marie leaves to run some errands. Hank ask Jesse if he is feeling ok. Jesse tells him that he is. Jesse goes on to tell Hank that he has a story that will make their toes curl but no proof. Jesse also tells them that Walter is retired so that they won’t catch him with a cam. Hank plays the message that Walter left about wanting to meet with him and on it Walter tells him that if Jesse wants to shoot him in the head that it is entirely up to Jesse. Hank tells Jesse they are going to put a wire on him. Jesse can’t believe it and tells them that.

If he goes he is dead. Hank thinks Walter cares about Jesse. Jesse disagrees. Hank goes through a list of all the things that Walter has done for Jesse and tells Jesse he doesn’t think Walter wants to hurt him at all. Hank also reminds him that where he is meeting Walter is out in the open. Hank tells Jesse he believes this is the best way to get Walter. Jesse leaves to go pee. Ramirez ask what if Jesse is right and this is a trap. Hank says in that case they will get Jesse being killed on tape. (Unfreakingbelievable what Hank is willing to do in order to nail Walter).

Walter is sitting on a bench. Jesse gets out of the van and starts walking towards Walter. Jesse sees some guy standing across the street that looks sketch and won’t go over to Walter. Jesse walks away. Hank gets pissed. Jesse goes to a pay phone and calls Walter. Jesse tells him nice try, then tells Walter he will get him where he lives. Jesse hangs up and walks away. Walter gets up and starts walking that direction. The sketch guy Jesse saw was just there to get his daughter. Walter calls up Todd and tells him that he just may have another job for his uncle.