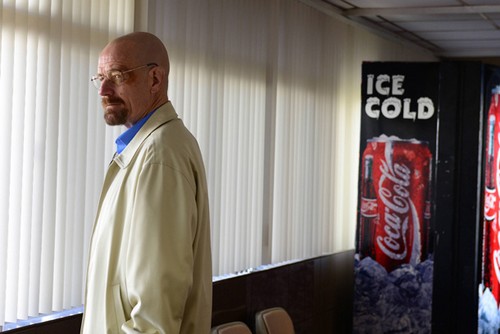 On last night’s episode 13 of BREAKING BAD Todd and Lydia plus two are working on a new batch of meth. Todd gets some of it to sample and finds out it is only at 76% (oops). Lydia starts freaking out because it isn’t blue (put in some food coloring..end of problem..lol). Lydia tells Todd that the blue meth is their signature and Todd agrees. Lydia doesn’t look to hot. Todd offers her a drink and then offers to cook her something. Lydia declines both offers. Todd offers to get his uncle for help, Lydia turns that idea down and tells Todd she just wants him to get the meth blue. Walter calls Todd and tells him he has a job for his uncle. Walter tells him he wants his uncle to get the one person who isn’t in jail Jesse. Todd tells him he will set up the meeting and hangs up.

Hank and Ramirez meet up with Jesse who has a idea on how they can bring down Walter. Jesse tells Hank he knows someone who knows where Walter puts his money.

Hank and Ramirez meet up with a guy that works for Saul and tells him they are there for his protection because there is a hit out on him. The guy doesn’t believe Hank. Hank then tells him as soon as Walter call he is going to kill him and that he has a trace on the phone. The guy tells him he doesn’t know where the money is but that he put it in a van for him. The guy even gives up the name of the rental place he got it from and tells them when he got the van back it was dirty. Hank takes the battery out of the guys phone and gets up to leave. He has someone guard the guy.

Walter is with Todd and his Uncle. They want to know why he wants a hit put on Jesse. Walter tells them that Jesse is angry and won’t listen. Walter also tells them that Jesse is like family to him and so therefore he wants it to be fast and painless. Todd’s uncle wants Walter to cook and teach Todd how to make his special meth. At first Walter tells them he is out of the business but then agrees to do it after the job is done.

Walter shows up at Brock and Andreas house. Andrea ask if Walter has heard from Jesse. Walter tells her no and that he is worried because Jess is using drugs again (bitch move Walter). Andrea offers to call Jesse and Walter gives her h
Is new number. Andrea leaves a message telling Jesse that Walter is at THEIR house. Walter tells her thank you and that he will call her later and see if Jesse has called her.

Hank gets Jesse’s phone and hears the message and figures that is how Walter plans to bait him. Hank concedes that it was a nice try but they are going out to the desert to find Walter’s money.

Skyler and Junior are working at the car wash when Saul drops by. Junior recognizes him from the billboards and gets super excited. Walter walks in and Saul tells him one of his guys is gone and he has no idea where he went. Saul is wearing a bullet proof vest (scaredy cat). Jesse text Walter a picture of his barrels of money. Jesse then calls Walter and tells him he is going to burn ten grand a minute. Walter is speeding off to the desert to find him. Walter tells him the only person Jesse is going to hurt is Walter’s family. Jesse tells Walter he is a monster. Jesse gets quiet when he realizes Walter has confessed to his crimes on the phone. Walter gets to the desert and gets out of his car with a gun and looks around, he realizes nobody is there. Walter is pissed and pulls the battery put of his phone. He climbs up a bit and then stops and starts coughing. He notices car headlights and starts running, he calls Todd’s uncle and tells him he sees Jesse and tells him where he is at ( which is really impressive since he pulled the battery out of the phone just a few minutes before that….lol). Walter then realizes that Hank and Ramirez are with Jesse and he calls the hit off.

Hank is calling out for Walter ( and for once he really does look like he is trapped). Walter comes put from behind the rock and drops his gun. Walter puts his hands up and starts walking to Hank slowly. Walter then puts his hands on his head and walks towards them backwards. Walter gets down on his knees. Hank comes up and handcuffs him and then shows him the fake money picture. Hank ask Walter where the money really is at. Walter stays the hell quiet. Hank reads Walter his rights. Jesse walks up to Walter and spits in his face. Walter rams him. Hank throws Walter in the car. Hank then calls and brags to Marie that he got Walter ( and that right there is how I know shit is about to go bad). Walter notices a truck pulling up (told ya) and starts panicking. The guys get out and point their guns at Hank and Ramirez. Walter is yelling at them not to do it. They aren’t listening and within seconds they are shooting at them. They duck behind the car Walter is in and the guys keep shooting.

Next weeks episode should be good. Can’t wait to see what happens and who it happens to.