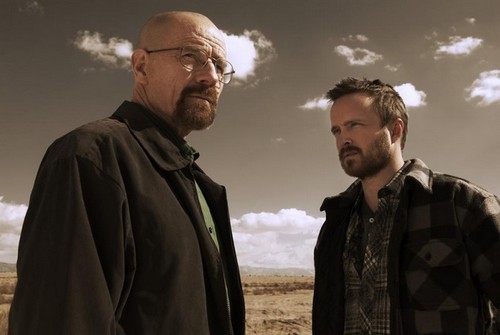 Tonight’s episode of BREAKING BAD was wonderful, and it proved to us just how excited we are to watch this final season to its end.  If you are curious about next week’s episode we have managed to get our hands on a sneak peek video and a few spoilers to whet your appetite for next week’s episode 13 “Ozymandias.”

Spoiler alert: If you’re one of those people who doesn’t like spoilers, stop reading now! We have some juicy spoilers for you about the season 5 episode 14 of AMC’s “Breaking Bad”

Official Showtime synopsis of next week’s episode: “Everyone copes with radically changed circumstances.”

On next week’s show the title, Ozymandias, is named after the poem by Percy Bysshe Shelley about the inevitable fall of kings and empires and it prepares us for Walter’s inevitable downfall.  In Walter’s mind he is on a fixed path of despotic and violent hegemony over all those in his realm, family, friends, associates, enemies, peers and rivals.  As he says in the poem, “My name is Ozymandias, King of Kings / Look on my works, ye mighty, and despair!”

In the video below, you’ll see a pretty intense shootout and bullets are definitely be exchanged. Do you think anyone will lose their lives or wind up in the hospital?

Breaking Bad episode 14, “Ozymandias” airs on AMC on September 15 th, 2012.   Check out the preview video below of episode 14 and let us know in the comments below what you think!  Are you enjoying season 5 of Breaking Bad?