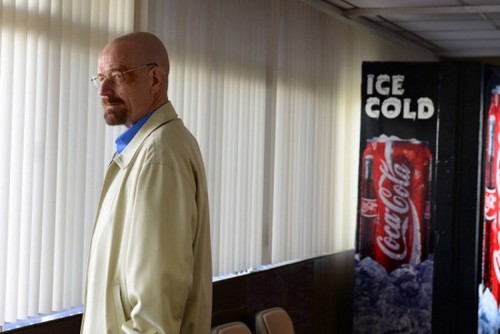 Tonight on AMC BREAKING BAD continues with another exciting episode.  Tonight’s episode is called, “To’hajiilee”  and on tonight’s show things heat up for Walter White in unexpected ways.  Did you watch last week’s episode?  If you want to catch up before tonight’s show, we have a full and detailed recap, right here for you!

On last week’s show Walt wanted to find Jesse and make him see reason, he really wanted Jesse to start a new life and move on.  Skylar found out about Jesse, she told Walt he can’t just talk to Jesse anymore.  Skylar felt they came so far, what is one more death.  We also found out  that the reason Jesse did not burn down Walter’s house was because Hank stopped him.  Hank talked Jesse into helping him bring down Walter.  When Walter called Jesse for a meeting to talk things out Hank decided to wire Jesse and try to get some evidence on Walter.  Jesse decided to do things his way and put Walter on notice after mistakenly thinking Walter set him up.

On tonight’s show it looks like any feelings that Walter had for Jesse are fast coming to an end and a showdown is coming between the two.  Walter knows that Jesse is out to get him and he has to get Jesse first, it is a question of survival.   Walter call’s Todd’s uncle to do a job.  Walter does not know where Jesse is.

Celeb Dirty Laundry will be covering all the drama of this final season and you don’t want to miss this highly acclaimed television show featuring these top-notch actors. Prepare for the final Breaking Bad sprint to the finish line and join us each week for our live recap of Breaking Bad at 9PM EST!  If you are curious what is going to happen tonight we have a sneak peek video and some spoilers for your enjoyment right here.

RECAP: Todd, Lydia and Todd and two others are working on a new batch of the meth; Todd takes a sample and they find that the meth is 76%. Lydia asks where’s the blue colour in the meth; the guys don’t really care about it. Lydia tells them that the blue meth is their signature and the buyers expect it when they purchase the meth, Todd agrees it should be coloured. Lydia looks very stressed, Todd comes over and brings her some tea to drink. He offers to make her something to eat and she declines it; Todd then says sorry about the meth not being blue. Todd then offers the services of his uncle but Lydia declines it; she just wants Todd to increase the quality of the meth.

Todd gets a call from Walter and he offers Todd’s uncle another job. Todd sets up the meeting and Walter tells him that there’s one target who’s not in jail and it’s Jesse Pinkmin; Todd says he’s got it and hangs up.

Hank meets up with Ramirez; Ramirez questions what they should do now. Hank tells him that Jesse has an idea, he bring Ramirez over and Jesse tells him that they need the evidence to put him away but he’s too smart. Jesse then says he knows someone who might know where Walter keeps his money, the three are back at Hank’s house. Hank throws down a heart on the floor and pours some blood on it, he rubs it all in and tells Jesse he’s up. Hank and Ramirez meet up with one of Saul’s goons and tell him he’s not under arrest but he’s there for his protection. Hank then mentions they both know how dangerous Walter can be, he asks what he can tell him about Walter. They say they wired Walter’s phone and says that he’s the next target; he doesn’t believe hank that much. Hank then says that Saul has a trace on his phone and once he calls Walter is going to kill him, he’s getting all upset not knowing he’d kill. He has no idea why Walter would want to kill him since he’s done nothing, he mentions he has no idea where the money is but mentions how they put it in a van for him. He tells them where he rented the van, he tells Hank how the van was dirty and everything when he got the rental back. Hank then removed his phones battery so he can’t be tracked, they have someone to guard him.

Walter is with Todd and his uncle, they ask what they’re doing and why he ordered a hit on Jesse. Walter tells them he won’t listen and is completely angry for no reason; he tells them that Jesse is family to him and he wants it to be very fast and nothing painful. Todd’s uncle tells them that for compensation Walter has to cook for them, he says he’s out of the business. They want him to teach Todd how to make his special meth; Walter then says he will only cook once after the job is done. Todd’s uncle puts out his hand and Walter gets up to shake it; he tells him time is of the essence.

Brock is eating breakfast and his mother asks him what he wants for lunch at school; Walter shows up to their house and reminds them he is Jesse’s friend and wants a moment to talk with them. She is rushing and invites Walter in; Walter says hi to Brock and he seems reluctant to answer. Andres his mother then asks about Jesse; Walter then says he can’t reach him anywhere and wonders if she’s heard from him. Walter then tells her Jesse is using drugs again and has a bad feeling about it all; she tells him to maybe call the police or his lawyer Saul. Walter says he has but there was very little help; he mentions how they fought and that Jesse is very upset with him. He hopes it’s the reason that Jesse hasn’t called; Andrea then offers to call Jesse and Walter gives her his new number. Andrea leaves Jesse a message and mentions how Walter is at their house; Walter thanks her and says he should go and he says he’ll call later to see if he called back. Walter leaves the house and goes to his car, he tells the hit men to kill off Jesse but that Andrea and Brock should not see anything. Hank picks up Jesse’s phone and hears about how Walter tried to bait out Jesse and believes it was a nice try but figures out his plan easily. Hank says they will go out in the desert and find the money Walter buried.

Junior is working at the car wash with Skyler at the register, he then asks if he can go home since it’s Saturday and believes the smell should be gone soon. Saul walks in and Skyler starts taking over; Junior then says he notices him from the billboards and Junior looks so excited. Junior then says he likes his commercials and asks about his face, Saul tells him it was an accident and tells him not to drink and drive but if he does to call him. Walter comes to see Saul and he says that his goon is gone and has no idea where he’s gone, Walter mentions that he’s trying to bait Jesse but Saul tells him it’s likely Jesse figured it out. Saul is wearing a bullet proof vest and is worried for his goon, Walter walks in and Skyler asks him what’s wrong; he tells her it’s fine and she goes back to help Junior at the register. Walter looks over at Skyler and Junior, Jesse texts him a picture and found his barrels of money. He tells Walter that he’s going to use some gasoline and a lighter as a threat; Jesse tells him if he hangs up then he’s going to burn 10,000 a minute. Walter is speeding off and tells Jesse his cancer is back and all he’s hurting is his family; Jesse doesn’t believe he’s sorry about Brock. Jesse calls him a manipulative monster, Jesse stops talking after Walter just confessed to all his crimes on the phone. Walter gets to where he buried his money and realizes that no one is there. Walter leaves the car with a gun and starts looking around for Jesse; he notices how nobody is even there. Walter pulls out his phones battery and is completely pissed off, Walter climbs up high and starts coughing badly. Walter then sees a car heading on over and he’s completely worried; he runs away but then calls Todd’s uncle that he has Jesse in sight. He gives his coordinates and tells them to get there as fast as possible; Walter the notices how Jesse is with Hank and Ramirez. Walter then calls it off, he tells them to forget coming and that their deal is off.

Hank and Ramirez are armed looking around for Walter, they start calling Walt out and he looks like he doesn’t know what to do this time.

Hank aims at Walter who comes out from behind a rock; they have their guns aimed at him and Walter drops his gun. He puts his hands up and starts walking over to them slowly; he turns around at their request. He puts his hands on his head and walks backward to them; he gets down on his knees. Hank cuffs Walter and shows him the fake picture; Hank tells him to point out the spot of his money. Walter doesn’t talk and Hank says he’ll get a search team and will find it; Hank then tells Walter his rights. Walter then calls Jesse a coward; Jesse walks over and spits in his face. Walter rams into him and the two are ready to fight; Hank puts him in the car. Hank then makes a call and tells Marie he got Walter in handcuffs. Marie congratulates him and says she feels much better now, Hank tells Marie he loves her and Walter then realizes the trucks pulling up. Walter is freaking out saying no as all the men come out pointing guns at Hank and Ramirez. He shouts at them not to do it; Walter is telling them not to do it. The men want badges but Walter keeps screaming and screaming. One of the men then go and shoot at the two; Ramirez and Hank take cover behind the car where Walter is in. The men just keep unloading bullets at them.