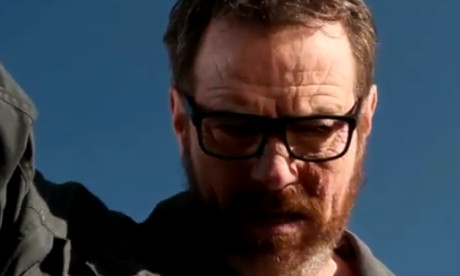 Breaking Bad, which took home the Emmy award for Best Drama, will be ending next week — and fans of the show are both thrilled and devastated, as one of the most popular series on television at the moment comes to a fiery, maybe even violent, end. Tonight’s episode was an intense one and, in case you missed all the action, CDL recapped the episode in detail for you HERE.

The finale episode is entitled “Felina,” which is obviously an anagram for the word finale. AMC hasn’t released much in way of the show’s synopsis either, other than a brief one line that reads, “The series finale.” Seems like they’re trying to keep this conclusion locked down and sealed tight.

Take a look at the sneak peek video below and let us know what you’re most looking forward to seeing on next week’s finale episode. Chances are many people are going to get emotional, as they’ve journeyed alongside Walter White (Bryan Cranston) since the beginning. They’ve experienced his struggles; they’ve watched him triumph; and, while Walter’s fate seems certain, we won’t know what’s going to happen to him for sure until we watch next week’s episode. What do you hope happens? Are you afraid for Walter?