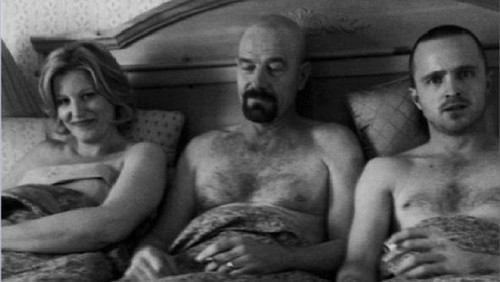 Who would have thought that Aaron Paul would be the one to spoil Breaking Bad? Not any of us, that’s for sure. But alas, Paul has uploaded a picture with the caption ‘Spoiler Alert’, showing Jesse in bed with Walter and Skyler.

Obviously, Paul hasn’t really revealed anything concrete, although he’s raised a ton of questions by uploading this photo. It is also heartwarming to think that after so many years, the cast of the show is clearly close to each other.

AMC recently announced that they were planning a Breaking Bad spin-off, Better Call Saul, and although Bryan Cranston and Aaron Paul’s movie careers are taking off, it should be interesting to see if they ever make cameos. Cranston recently starred in several critically acclaimed films and is being rumored for the role of Lex Luthor in the DC cannon, whereas Paul is headlining Need For Speed for Dreamworks, and he will also be starring in Exodus alongside Christian Bale.

Alas, the ending of Breaking Bad will be a bittersweet farewell – especially if the ending is the trio together in bed, naked and holding cigarettes. Does Arron’s picture portend a triple murder, a triple suicide, a double murder and suicdice?

What do you guys think about the end of Breaking Bad? Will you be watching the finale? Are you excited or sad? Let us know your thoughts in the comments.