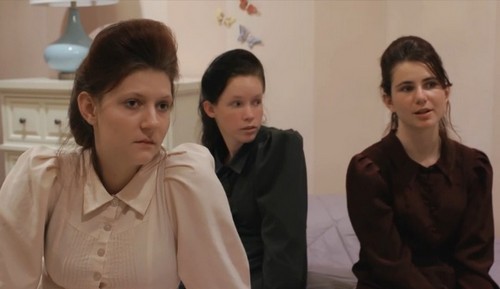 Tonight on TLC their newest docuseries, BREAKING THE FAITH, airs with a whole new episode called, “Temptation.”  On tonight’s show the kids experience a Salt Lake night time hot spot.  Did you watch last week’s premiere episode?  We did and we recapped it right here for you.

On last week’s episode after the “Safe House” had been compromised, the group fled to Salt Lake City. They stayed at the home of a Mormon woman who will assist them. Though the girls have left the crick, they still feared prophesies they were taught could be true.

On tonight’s show settling in Salt Lake, the housemates are branching out more into the gentile world. An old flame is rekindled as one of the girls reunites with her Crick love. All the kids continue to push the boundaries and experience a Salt Lake night time hot spot.

Tonight’s episode of Breaking The Faith opens with Connie on her way to meet her old boyfriend Cody. She hasn’t seen him in over a year, and she left the Crick just to see him again. Their reunion is everything she hoped it would be, and he was happy to see her. Despite the fact that the Prophet told Connie she would go to hell if she is with him, she tells him that she wants to be with him.

Back at the Safe House, two girls are knocking on the door. Zack invited them to come over and hang out, but he isn’t home. Matt, Zack’s brother is happy to entertain them. In the FLDS Matt wasn’t allowed to talk to women, but he is enjoying spending time with girls. He has a huge crush on Molly, one of the girls that stopped by to see his brother.

In the morning Matt tells Zack that he missed out on hanging out with the girls last night. Ben, Matt, Zack decide to go clubbing to meet more girls. Then invite the girls to go along with them. Connie is nervous about going to the club, because at FLDS they are taught that clubbing is evil.

The group heads out to a club called Area 51, and the girls wear their FLDS dresses. Angie is uncomfortable because it is dark, and crowded, and people keep touching her. Val is disgusted that people are “rubbing against each other” and “touching each other.” Martha is overwhelmed when a group of cross-dressers approach them,

Val gets overwhelmed and rushes out of the bar, without telling anyone she is leaving, The group begins panicking when they can’t find her. They head home hoping she is there, but she is not at the safe-house. She arrives back home at 4:00 AM, and everyone wants to know where she went. She tells them it is “none of their business” where she went. Val is annoyed that Ben thinks he is the “head of the house” and keeps trying to control her. That is why she left the Crick, she was tired of being controlled.

The next day Connie and Cody head out on their first real date. Cody drops a bomb on her and confesses that he has dated and kissed other girls since he left the Crick because he didn’t think she would really leave. Connie isn’t mad though, she is happy to be with him, and she still loves him.

Connie decides to take Cody back to the safe-house to meet the rest of the group. Cody already knows Angie, he grew up with her brothers. Zack is skeptical about Cody, he has a reputation for being with a lot of girls. Ben is annoyed, if Cody really cared about Connie, then he should have rescued her himself from the Crick himself.

The next day at breakfast, the group discussed finding jobs. Martha is excited to fill out some applications. Matt is concerned though, because none of them have ID’s, or even high-school displomas. Zack is interested in joining the military.

Zack and Matt are discussing their families back at the Crick. Zack misses him Mom, they used to be very close. But, after he left the Crick she got in trouble for talking to him and they sent her away. He hasn’t talked to her since.

Angie and Connie are about to go for a bike ride. They miss riding bikes, they were banned form the Crick a few years ago because a girl confessed that she had an orgasm from riding her bike.

Val is excited to start a new job, she got a trial run at a restaurant with the help of Lisa, the woman that set them up at the safe-house. She is getting overwhelmed by taking orders, the manager thinks she needs to work a little harder. She’s not sure if he is going to hire her.

Back at the safe-house Ben, Zack, and Matt are playing cards. Zack confesses to Ben that he has no idea where his Mom is, or all ten of his siblings. Matt is going to try to help him track down his Mom, but Zack is afraid that she will reject him because she is scared of the Prophets.

Molly, one of the Mormon girls that they met through Lisa, is coming over to hang out with Matt. She brought friends with her to hang out with Zack and Ben. Ben can’t close with the girls, but Molly spends the night in Matt’s room.

Ben hires a private investigator, and takes Zack to his office to help him find his Mom. The investigator reveals to Zack that his Mom is actually a registered nurse, and reads him a list of his brothers and sisters. However, the PI says it will be hard to find her because the FLDS has her in hiding. He is going to continue looking for her.

Matt is furious back at the safe-house. He can’t believe that Ben and Zack went to see the investigator without telling him. Ben thinks Matt is jealous of the bond he is forming with Zack. Matt has always felt like he isn’t good enough for his family, and Zack is bringing up those old feelings.