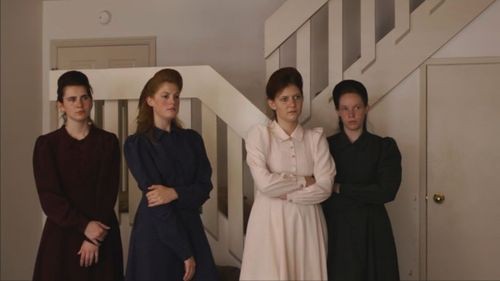 Tonight on TLC their newest docuseries, BREAKING THE FAITH, airs with a whole new episode called, “Into the Unknown.”  On tonight’s show the women still fear prophesies they were taught could be true.  Did you watch last week’s premiere episode?  We did and we recapped it right here for you.

On last week’s episode after escaping their community, the group headed toward an undisclosed location known as a “Safe House.” Once there, the women made a surprise discovery: the house was overseen by someone who they’ve been raised to fear and despise.

On tonight’s show after the “Safe House” had been compromised, the group flees to Salt Lake City. They stay at the home of a Mormon woman who will assist them. Though the girls have left the crick, they still fear prophesies they were taught could be true.

Tonight’s episode of Breaking The Faith opens with the FLDS runaways running away from their first safe-house. Their cover has been blown and they are heading to Salt Lake City to another safe-house.

The group is still upset with Jake for returning to the Crick to get Val without telling anyone where he was going. Val is happy to be free though, her biggest fear is to be married away to an old man that she doesn’t know. Martha thinks that it was brave of Jake to go back for Val, but she is upset that he blew their cover at Carolyn Jessup’s.

Martha warns the group that her step-dad is really mean, and she has a feeling he is going to chase them down.

Angie reveals tat she is nervous to be on the road to Salt Lake City, at the Crick they are taught that God wants to destroy Salt Lake City because it is an abomination to the church.

Halfway to Salt Lake City the group stops at a rest-stop. Jake gets paranoid because he thinks that God Squad is following them. He tells Ben to take care of his sister, and then he jumps in his car and drives away, hoping that God Squad will follow him instead of Ben. All seven of the remaining runaways have to pile into Ben’s car and travel the rest of the way to Carolyn’s friend’s house in Salt Lake City. Their new safe-house is huge, and the runaways are overwhelmed. All of the doors are locked, they finally find an open door and walk in. When they open the door, an alarm starts going off.

Carolyn sent one of the boys a code, they find the alarm and enter it. They find a note from the owner of the house, “Sister Lisa,” welcoming them to her house. The runaways run through the house, to find their bedrooms, and explore.

Once they get settled, the girls question Val about her brother. They are curious where he drove off to. Val has no idea, she didn’t even know that Jake had left a girl named Linda in the Crick.

In the morning “Sister Lisa” pays the runaways a visit at their new safe-house. She loads them in the van and takes them to meet up with her church’s youth group. The youth group is Mormon, but they are nothing like the FLDS, they wear make-up, normal clothes, and eat whatever they like. The FLDS girls are not getting along with the Mormon girls, they called their religion a cult, and it upset the FLDS girls.

At dinner that night Ben asks the girls why they are still wearing their FLDS dresses. He hits a sore spot with the girls, they are taught that their dresses protect them, and keep them modest. Martha secretly doesn’t want to wear her dress anymore though.

Connie confesses to Ben that she wants to see her boyfriend Cody. He left the Crick, before she was ready. Ben tells her that he will try to get a hold of him for her, but he is concerned because Cody has a reputation with girls. He is afraid Connie is going to be disappointed.

It is Pioneer Day is Salt Lake City, so Sister Lisa drops the FLDS runaways at the parade to enjoy the festivities. Martha is embarrassed of her dresses because everyone at the parade is staring at them and taking pictures of them. While they are walking around they are approached by a group of Mormon missionaries who want to convert them to Mormon. They turn them down though.

After the parade the runaways head to the park and see an Indian Revival, the park is filled with Native Americans running around in full dress. The girls feel uncomfortable because at the Crick they are taught that if they don’t wear underwear the Indians will attack them.

Matt makes a huge mistake, and touches one of the necklaces one of the Indians is wearing. The Native American is offended that Matt touched his arrow-head necklace and pushes him. Another Navajo Indian comes over and explains to Matt that an arrow-head is a part of their religion and it is disrespectful to tough it.

Despite the run-in with the Navajo Indians, the group has a good night, and enjoys the fireworks.

After the fireworks Connie heads home and calls the number Ben gave her for Cody, he is happy to hear form her. Cody agrees to meet up with her tomorrow.

The next day the girls help Connie get ready to go see Cody. Connie is very nervous.

Ben confides in Martha that he thinks Cody may have a boyfriend. Connie left the Crick so she could be with Cody, it will be devastating I he doesn’t want to be in a relationship with her.