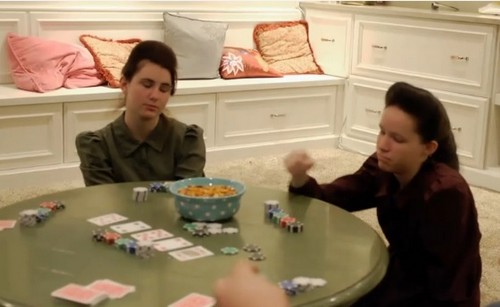 Tonight on TLC their newest docuseries, BREAKING THE FAITH, airs with a whole new episode called, “Shedding Skin.”  On tonight’s show the girls have escaped but Angie and Connie are having a harder time adjusting to life in the gentile world than Martha and Valerie. Carolyn Jessop stops by to check in on their transition.  Did you watch last week’s premiere episode?  We did and we recapped it right here for you.

On last week’s episode sparks fly when the influence of outsiders caused a riff and forced the conservative United Order and the rebellious Repentants against one another. The boys were especially weary that one of their own might be putting the whole house in danger.

On tonight’s show everyone in the house is looking to branch out from all of the drama. Connie and Cody’s relationship grows stronger and Connie is poised to make a big transition. Angie meets a new friend Ariah who is going to change her life.

Tonight’s episode of Breaking The Faith picks up where we left off last weekend. After the huge blow-up in the house, Val is packing her things. She has called her boyfriend Amir to come pick her up from the safe-house. She can’t stay in the house any longer, she thinks it is worse than The Crick. Val announces she is leaving and no one stops her, Ben thinks her leaving is “best for everyone.”

Martha is out with the Mormon girls she is leaving with. They are going to take her shopping, because she is ready to wear “Gentile Clothes.”

Back at the house, Ben is trying to figure out how to keep the rest of the house intact, now that Martha and Val have left. He starts out by apologizing to Connie for screaming at her. Connie accepts his apology and agrees to “be friends” with Ben and Matt. Connie has decided that the boys are right, she needs to “eave her comfort zone.”

Martha and her friends are at a salon, she is getting her hair done and make-up done for the first time in her life. She looks like a completely different person when the stylists are done, and she loves her new look. After she leaves the salon she heads to a boutique to try on some “Gentile clothes.” She settles on a new outfit and throws her FLDS dress away.

Angie is meeting with a family, they are planning to hire her as a baby-sitter. They are satisfied she is qualified, seeing as how she has 16 younger siblings.

Ben and Matt head to a gym to play basketball, they were never allowed to play sports at The Crick. Some other boys are at the gym and they challenge them to a game of 2-on-2. Ben is overwhelmed playing, he is in horrible shape, and he can’t breathe. He has to go outside and take a moment to catch his breath.

Angie is still babysitting, after the baby is down to sleep she starts going through her parents’ closets. She wants to see what some of their “Gentile clothing” looks like.

After her baby-sitting gig Angie heads back to the safe-house, and chats with Connie. She has never even kissed a boy before, and Connie is explaining to her how to “French Kiss.” Angie doesn’t think she is ready to date boys.

Connie and her boyfriend Cody head out to dinner, and he takes her to a Mexican restaurant. Cody encourages her to try something with a side of sour cream, at The Crick she wasn’t allowed to eat dairy products. Connie confides in Cody that she wants to look more “Gentile” but she is scared that Angie will be upset with her.

Matt is getting ready for his first trip to Mormon church, he agreed to go with Molly after he botched their hiking date. He is kind of concerned that Molly brought her friend Stacey with them, he’s not into polygamy. Matt is bored to death at Molly’s Church, and he has no interest in joining.

Back at the safe-house, Connie is trying to convince Angie to go on a double-date with her and Cody. Angie is stubborn, and doesn’t want to go. Connie confesses to Angie that she is thinking about wearing Gentile clothes. Now that Martha and Val have both moved on, she feels like her and Connie are not making any progress. Martha does agree to go back to the club, and let her hair down though.

Ben, Zak, Matt, Connie, and Angie head back to the club. Connie and Angie let go a little, and start dancing at the club. They are actually having a great time. They head to the bathroom to let their hair down, and make a few friends. They convince Angie to try a drink at the bar, Angie has never drank alcohol before. After a few drinks she is on top of the bar, dancing, in her FLDS dress.

The next day Connie and Cody head to a salon, she is getting her hair and make-up done for the first time. She wants to fit in more, she is tired of people looking at her funny everywhere she goes. She is hesitant, but Cody convinces her to let the stylist do her hair. After she is done at the salon Cody takes her to a store to buy some Gentile clothes. At first Connie isn’t really into it, but then she realizes how “good she looks” and she gets into it. She has never worn pants before in her life. Her boyfriend Cody loves her new look.

Connie heads back to the safe-house to show her roommates her new look. She is nervous that Angie will be upset with her. And, she has good reason to be. Angie tells her she is “pissed at her…”