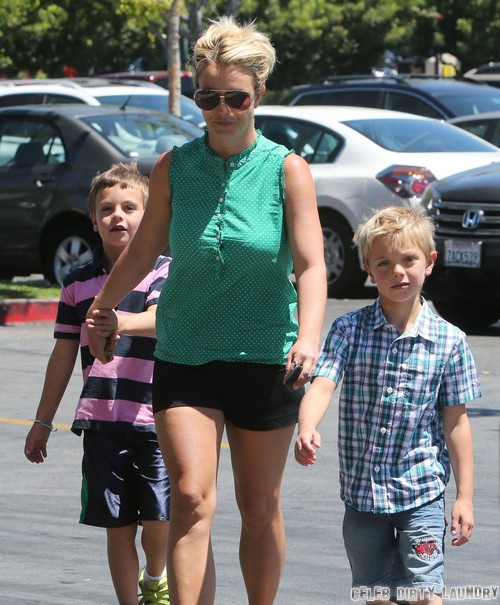 Remember back in 2006 when Britney Spears went a little bonkers and Kevin Federline emerged as the better parent to their two sons? Well in the 7 years since Britney has worked really hard to pull herself together and make her life as stable as possible for the sake of her sons. This was never really even an ugly fight and once Britney proved that she could handle it Kevin gladly loosened his stranglehold on custody and has allowed her to spend as much time as possible with her boys.

According to the Sept. 9th print edition of GLOBE, Britney was caught completely off guard by Kevin’s recent marriage to Victoria Prince and she is terrified that they will now take steps to cut her out of the kids lives. Kevin insists on the boys living with him, Victoria and their two year old daughter, Jordan and he has become quite the family man. Victoria is like a mother to both Sean Preston and Jayden and Britney is like the cool parent that swoops in to have some fun with the boys.

Now that Kevin and Victoria are married Britney feels like they have succeeded in becoming a solid family and she fears they will phase out her involvement. Britney would love to go back to court to fight for a different custody arrangement but she realizes that she’s not likely to get a judge to budge from how things are now. That means she has to trust that Kevin won’t shut her out.

Do you think that he wants to take the kids from Britney for real? I mean, why keep giving her more time only to take it away? It sounds like a justifiable but probably unrealistic fear on Britney’s part, don’t you agree? Tell us your thoughts in the comments below!