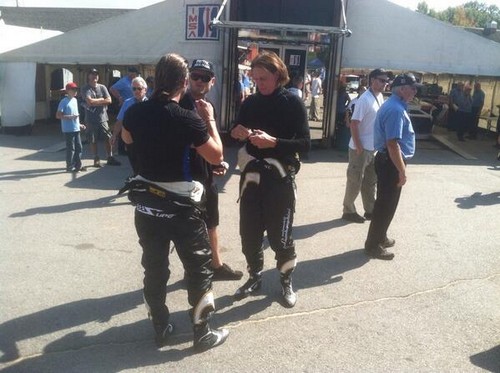 Bruce Jenner has finally gotten himself free from Kris Jenner and he is not letting any grass grow under his feet. Reportedly Bruce was out and about this weekend and he was flirting, partying and acting like he did not have a care in the world. Bruce is relieved to be out of Kris’ clutches and he is having the time of his life.  “Boys just wanna have fun,” right?

Bruce and his son’s were having a boy’s weekend at the Virginia International Raceway and Bruce was racing Lamborghini’s. Bruce said that he was thrilled about the opportunity. Now, if you’ve ever been to a car race, you know there are plenty of young hot girls in tiny outfits walking around and when the girls spotted Bruce they swarmed.  Bruce was thrilled and he took the opportunity to flirt and was bragging that, “He was finally free to do what he wanted and live life the way he wanted,” and he did just that.  After years of being taken for granted he was loving feeling that he was important to someone.

Do you smell that burning?  Well that’s the Kardashian brand going up in flames LOL….

So what caused Bruce to man up?  Well it seems Bruce’s scare with cancer caused him to finally wake up and walk out on his marriage to Kris.  When Bruce was terrified with his cancer scare he fully expected Kris to stand by him and support him, WRONG……  Instead Kris up and left for Mexico on vacation.   That was the straw, that broke the camel’s back, all the years of resentment bubbled up to the top and Bruce was done!