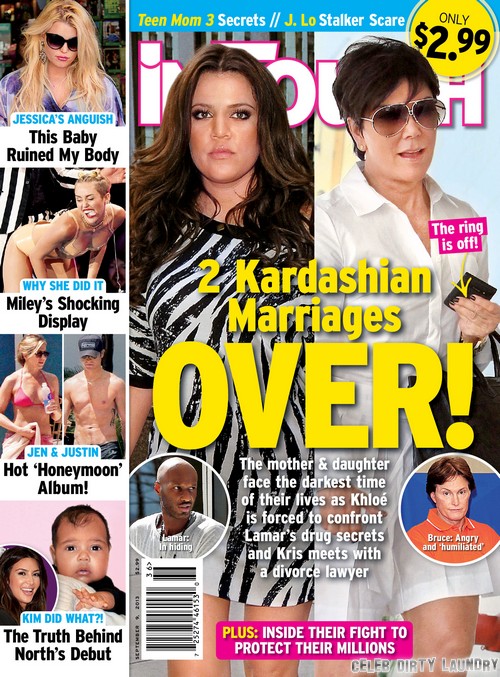 Bruce Jenner and Kris Jenner are reportedly already separated, even though the rumors of a possible rift only started a couple of months ago.

According to a new report from In Touch, the rift between Kris and Bruce has already ‘increased’, with a source adding, “They’ve had problems for a long time and have been separated for months.They don’t do anything together unless it’s filmed.They haven’t slept together in years and pretty much just have a business relationship at this point.”

Kris usually wears a massive wedding ring from Bruce, but it’s supposedly been missing from her hand for the past couple of weeks. The source adds that Kris was making sure that she wore gloves during Kylie Jenner’s birthday party, but the paparazzi managed to spot her before that without her wedding ring. The source explains, “There were also promo photos for her talk show [Kris] that she wouldn’t approve because she realized she wasn’t wearing her ring in them. She made sure they never saw the light of day.”

Jokes aside, what’s actually changed in Bruce and Kris’s relationship over the past year? This report states that they haven’t ‘slept together in years’, but Bruce and Kris would never break up for emotional reasons. The source claims that they only have a ‘business relationship’ at this point, but I think that’s enough for Kris and Bruce to stay together. If they’ve weathered cheating and divorce allegations for so long, why would they break up now? It would do their brand no good, and people don’t necessarily give Bruce enough credit for this – he, too, cares about the Kardashian brand, sometimes just as much as the rest of the family.

What do you guys think of this report that states that Bruce and Kris are already separated? Do you think it’s true? Let us know in the comments.