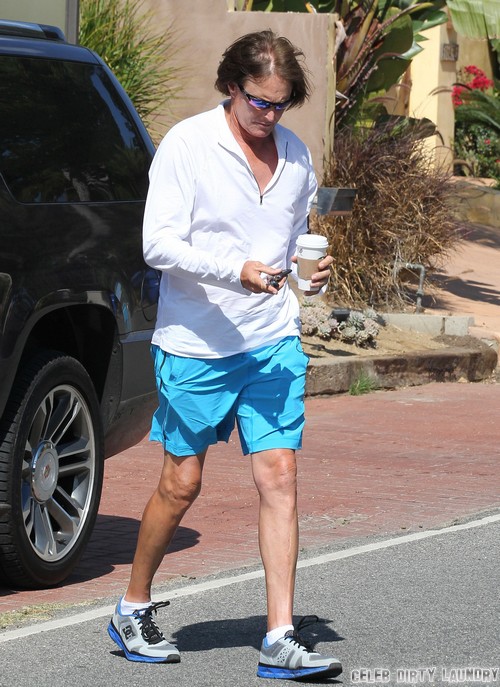 After the last several months it’s really no wonder that Bruce Jenner moved out of the mansion he had shared with his wife Kris Jenner and into his own man cave. Can we really blame this guy for wanting to escape the non-stop scandal that is affiliated with his family?

First you have Kim Kardashian and her baby daddy Kanye West. They may be hiding out in Calabasas but don’t think for a minute that baby Nori brought any sort of bliss into their lives. Kanye is still flipping out on random people as his new album fails miserably and Kim isn’t making a dime until she can squeeze herself back into a bikini. Plus I’m pretty sure every fight ends up with Kim reminding Kanye that he abandoned her for most of her pregnancy.

Then there’s Kourtney Kardashian who is now smack in the middle of a paternity suit filed by Michael Girgenti who claims that he is in fact Mason’s real father. Even if that claim is bogus, Kourt is still attached to Scott Disick who seems to bring precious little value to the family. Let’s not forget Lamar Odom’s string of mistresses that are leaving Khloe Kardashian absolutely gutted and debating whether or not a divorce is in order.

If Bruce could handle the stress from the older girls then I have to wonder how he deals with Kris pimping out his teenage daughters, Kendall and Kylie Jenner – grooming them to do whatever it takes to make a fast buck. The pressure from their momager has caused them to choose friends like lil Twist that are best known for their drug activity and brushes with the law!

Bruce has to feel like he is stuck in the middle of a bad Lifetime Miniseries, don’t you think? How long until he files for divorce from not just Kris, but the entire klan? Tell us your thoughts in the comments below!