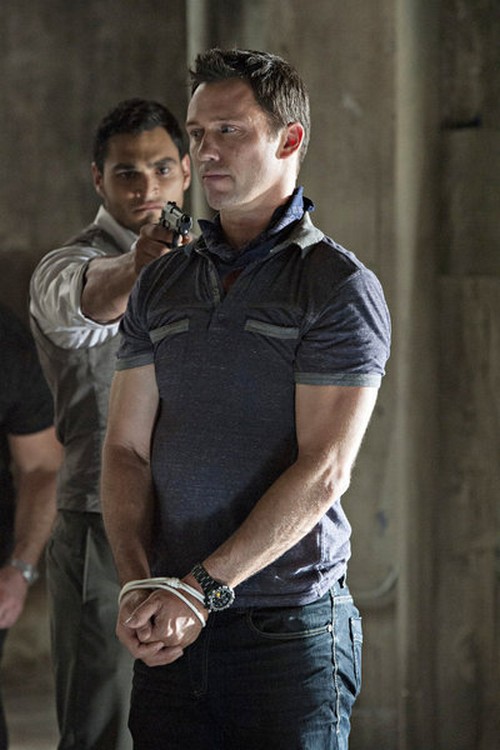 Tonight on the USA Network BURN NOTICE continues with a new episode called, “Things Unseen.” On tonight’s showSam and Jesse are thrust in the middle of a street war involving a decade-old murder after Fiona’s boyfriend is targeted by a coldblooded gang member. Did you watch last week’s episode? You can read a full and detailed review right here.

On last week’s episode the team looked for an antidote at the manufacturer’s lab in order to save a poisoned Middle Eastern diplomat. Elsewhere, Madeline took action when she suspected she’s being followed.

On tonight’s show when Michael discovers an old friend digging up secrets that could expose his cover, he must decide just how far he will go to protect the mission. Meanwhile, Sam and Jesse are thrust in the middle of a street war involving a decade-old murder after Fiona’s boyfriend is targeted by a coldblooded gang member.

Why is Michael dropping bags on a dingy? No he’s not getting rid of Ben’s body. He’s supposed to be leaving the county undetected. This never works with Fiona. She knows she wasn’t to surprise and did it anyway. She had to. She wanted to confront him over Ben’s death.

Michael should have stopped James executing Ben and no matter what he says about it blowing up his cover Fiona knows that Michael knows it was wrong. Yet he didn’t stop it. She’s worried he’s starting to understand or worse sympathize with James. Otherwise why else would have ignored his friends ever since.

Fiona already has her hands full with her boyfriend. She couldn’t get Michael to change his mind no matt how much she tried. She’ll be in Miami helping Carlos and he’ll be in the Canary Islands with Sonya. He has to set up a meeting an old friend for James. However this time he’s be pre-warned about his orders. He’s going to have to kill his friend when it’s all over.

Michael can either figure out a way to save a friend or let him die. This all may be a cover but things have gotten serious much too fast. Last week James was following his mom and now he has to kill a friend. Is this another one of James’s Tests?

On the hand Carlos’s little problem happens to involve more than Fiona can handle alone. Her boyfriend was once involved in a gang. During his tenure he trade in a fellow gang member to the police. Well the guy is out now after ten years and he’s looking for revenge. He put out a bounty on Carlos’s head. Even his old gang members are willing to turn him in. Dead or alive.

However after speaking to the D.A. Carlos and Fiona find out that they get Nardo back into jail if Carlos offers up a witness to a murder Nardo committed. Carlos won’t do it so Fiona enlists Sam and Jessie to help protect the witness. Which proves to be harder than they thought. The witness doesn’t want to be connected in any way. Jessie has to knock him for the guy to drag him to the car.

Boyd, the witness, takes some convincing. He won’t listen to Carlos or Fiona but he listened to Madeline. He’ll testify if he gets immunity and protection for his family.
Meanwhile Michael tried to go to Agent Strong to help protect his friend when he was told his cover is of upmost importance. Agreeing or most likely playing along, Michael continues with Sonya’s plan. But they hadn’t expected to have their signal blocked. Losing contact with each other Sonya acts on her own and nearly dies. Michael was able to say her in time.

Michael is hopeful they can abandon this mission but Sonya says failing is not an option. They set another trap and this time Michael is the one that has to pull the trigger. Before he killed his friend he told him he was sorry.

Back in Miami, Carlos tried to meet with the cop that helped him earlier to arrange a deal for Boyd when he found out she was dirty. She turned him in to Nardo but wasn’t smart enough to not remind Nardo she could arrest him at any moment. Her death shall not be mourned. The problem of getting Carlos away from Nardo at first looked hard until Nardo called Fiona. He’s claiming he’ll trade Carlos in for the witness. Fiona doesn’t know what to but to call Michael.

Michael calls in a favor. The favor has some head guy in Columbia making a call to Nardo. He tells Nardo to let everyone go but when Nardo refuses the mystery man orders his death. Carlos is safe but this is just one more body that has been falling like flies around Michael.

Sonya was the one that had arranged the favor. She and James put pressure on a supplier in order to get him to agree. She tells him James understood and doesn’t matter. He has big plans for Michael.

Carlos figured out what kind of pressure Sonya supplied. She attacked the supplier killing seven people. Carlos read about in a newspaper and although he loves Fiona he can’t live around these people anymore. He ended things with Fiona.