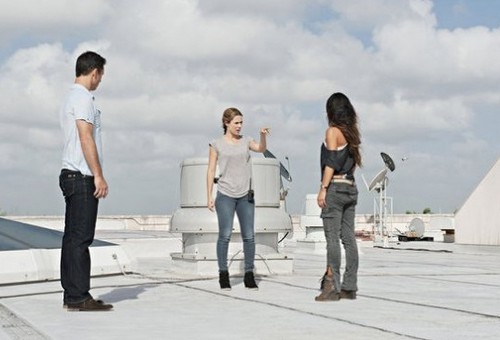 Tonight on the USA Network BURN NOTICE continues with a new episode called, “Sea Change.” On tonight’s show Fiona, Sam and Jesse form a plan to retrieve Michael. Did you watch the last episode? You can read a full and detailed review right here.

On last week’s episode as Michael (Jeffrey Donovan) became ever more conflicted with his mission, he traveled to Mexico with Sonya (guest starAlona Tal) in order to help James (guest star John Pyper-Gerguson) with an important job. Anxious to finish the operation, Strong (guest star Jack Coleman) hired freelance mercenaries to extract James on site… but brought along an unexpected guest.

On tonight’s show Michael must expose his identity to James and Sonya. Meanwhile, Fiona, Sam and Jesse form a plan to retrieve Michael.

Michael’s cover may be blown but James is taking the usual chance of keeping him alive. Could Sonya have helped his case? She did come to see him when he locked up. She wanted to know if what they had was real. Maybe she did talk to James. Because why else would James want to talk to Michael afterwards.

James tells him that he had great plans for him. Apparently he’s willing to overlook Michael breaking his trust and honest to god he asks Michael how does he feel about their relationship. He wants to see if Michael ever understood what he was trying to do. Whether what he says next is part of a grand master plan or possibly the truth Michael tells James how he came to change his mind over the course of his investigation. James wants Michael on his side and so tests him. He says he has to go back to the CIA and he has to make his people believe his cover was never blown. Nothing will makes sense for now but it will eventually. James has a plan.

Michael strangely enough follows his orders to a “T”. He goes to back to headquarters and he manages to sell the story James wanted him to say. They trust Michael and so they send him back to “take down” James. The only people that doesn’t trust Michael is Fiona. She fears he’s losing sight of what side he’s on. Especially when he explained away the usage of Simon of all people on the last mission. That instantly sent up a red flag. Without Michael’s knowledge, Fiona plants a tracker in his gun.

Later when Fiona meets with Jessie and Sam she tries to explain her fears. Jessie is willing to listen but Sam can’t believe Michael would betray them. Yes, he no longer wants and/or needs their help with James still that doesn’t mean he went over to the darker side.

Sam and Jessie follow Fiona’s tracker. They were spying on Michael when Sam decides it’s best to call him and see if he’s hiding anything. Michael admitted to his location and told them he was searching out leads. However Michael said he was meeting James in a few days but his tails see him meeting with James now. They know he switched sides.

Quickly his friends make a plan. Sam gets a plane and Fiona gets Maddie and Charlie. They’re taking everyone including Michael and they’re getting out of dodge. To help slow things down Fiona burns Maddie’s house down. Now all they have to do is convince Michael to come with them.

This is going to be much harder than they thought. James’s master plan involves Michael and Sonya taking over the business. He on the other hand will be escorted to the authorities. That way Michael will be considered a hero and heroes are never suspected for being the mastermind.

Michael is all set to carry out James’s plan when Sonya tells him about the fire at his mother’s house. Worried about what’s going on, Michael contacts Sam who plays his part perfectly. The plan could have worked but there were just too many things Michael needed to do. For instance he had to leave his car in order to go to another location. Of course something was up. He’s known Sam too long.

He forces Sam to pull over and when he tries to leave Sam begins fighting him. Sam can hold his own. He is former Navy Seal after all. Michael is able to defeat him though and he continues with the plan. But his friends aren’t done just yet. They still love him whether he wants them to or not. They have to give him one last shot.

In the meantime Michael is minutes away from turning James in. He’s waiting on the helipad with Sonya when Fiona comes upon them. She refuse to leave unless Michael comes with her and Sonya won’t take anymore of Fiona’s interference. Guns are out and someone, currently unknown, fires a gun.

Who won? Sonya or his friends? Find out next week on the series finale…