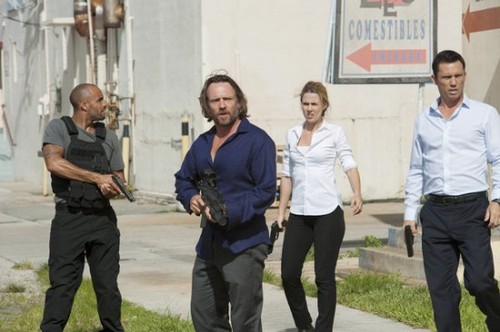 Tonight on the USA Network BURN NOTICE continues with a new episode called, “Tipping Point.”  On tonight’s show Strong hires freelance mercenaries to extract James on site… but brings along an unexpected guest. Did you watch last week’s episode? You can read a full and detailed review right here.

On last week’s episode when Michael discovered an old friend digging up secrets that could expose his cover, he had to decide just how far he woulr go to protect the mission. Meanwhile, Sam and Jesse were thrust in the middle of a street war involving a decade-old murder after Fiona’s boyfriend was targeted by a coldblooded gang member.

On tonight’s show as Michael (Jeffrey Donovan) becomes ever more conflicted with his mission, he travels to Mexico with Sonya (guest starAlona Tal) in order to help James (guest star John Pyper-Gerguson) with an important job. Anxious to finish the operation, Strong (guest star Jack Coleman) hires freelance mercenaries to extract James on site… but brings along an unexpected guest.

Michael is describing how building trust in an undercover assignment is very important both personally and professionally.

Michael meets with Sonya and is talking about the fake passports and travel papers for their traveling as a couple. They’re joining James for a “very important meeting.” Michael is trying to figure out where they’re going but she won’t tell him. She finally says that they’re going to Latin America. Sonya comments about how it’s funny that she has never had a chance to go there and have always wanted to. Michael describes it to her in the “hopes” of working there with her someday as he brushes the hair away from her face. Michael describes how you sometimes have to go further than you thought to keep your cover as he shares Sonya’s bed with her. Michael takes data off of her phone with a flash drive while she sleeps. Michael and Sonya plan to meet at 8 the next morning as she drives off.  Andrew calls him to find out where they are going and they talk about how close they are to finishing the mission. Andrew addresses the team about what Michael acquired from her phone

Michael will probably be with James while Sonya scouts. Max, Jesse and Michael criticize his plan. Michael is uncomfortable with rushing it and Andrew is insistent on not letting James slip through their fingers and so Michael can get his life back. Fiona is packing things up from her previous “mission.” Michael shows up while while she’s packing Carlos’ things. Michael tells her that she needs his help while Fiona emphasizes what it has cost her. Michael is asking her to keep an eye on Sonya so she doesn’t get hurt. Fiona agrees reluctantly. Sonya and Michael meet James at the airfield. Michael describes the anxiety leading up to capturing a target and that most things are just out of your control and that you have to adapt. He describes the extraction teams job of extracting while Michael is “[playing along.” James tells him that their organization is about to make a big leap forward. Jesse and Sam survey the vehicle convoy. James says he has a feeling that something is up. James tells them to radio the others to be more careful as they progress. Andrew counts down for the assault as the first vehicle in the convoy explodes. A heavy firefight ensues. Sam gets on Andrew’s case about the heat of the battle and that they need to be more careful. Michael tells James that they’re trying to take them alive not kill them. James, Sonya and Michael leave the truck attempting to get away as more pressure comes from Andrew’s people. James and his crew continue to attempt to fight their way out. An SUV pulls op on and they destroy it supposing that they are safe.

James and his crew run while Michael is attempting to leave a trail for them to find to be able to track them. Phones can be tracked Michael says as he leaves one on under the seat. Andrew is upset with the losses that they suffered. They find the phone that Michael left on and they leave to catch up with them. Fiona relays recon information to Sam and Andrew from outside Madeline’s house.. They’re trying to figure out how to complete the mission without Michael ending up dead. Fiona decides to hold off. Madeline lets the men in as she subtly waves Fiona off the attack. Michael is going over how to operate a manhunt without local authorities getting too involved. Andrew, Sam and Jesse are tracking James’ convoy in a helicopter relaying info to Andrew’s ground team. Michael describes that the downside of using a helicopter is that there’s nowhere for them to hide as James notices this. James ells Michael that they’re going to split up to attempt to lose the “copter. Andrew sends his Alpha team after one vehicle as hey trail the other. Michael meets some of James’ crew to see if they can get a bot started for a getaway. Michael gets them trying to find fuel as the building is assaulted. Another heavy firefight ensues. The fights ends and Michael announces himself to the team that came. Simon was apparently leading the alpha team and Michael is shocked.

Michael is tying to find out why James isn’t imprisoned after he captured him. Simon tells him that to help with the assignment because he is an unfamiliar face. He tells him further that he’s been working for Andrew since very shortly after Michael captured him. Simon updates Andrew on the situation and that James and Sonya are still missing. Michael lowers his weapon on Simon and they leave the boathouse. Michael describes the advantage of having a helicopter in the fight. They find James and Sonya as they get out of their vehicle to shoot at the chopper. They hit the gas tank on the chopper and they have to land. Michael and Simon discuss what they should do. Simon tells him that he should lure James back to the boathouse by telling him that everything has turned for the worst and that he needs assistance. Simon contacts bravo team to inform them that James is on hte way to the boathouse. Andrew, Jesse and Sam are on the way as Andrew tells them that Simon is the leader of Alpha team. They criticize and yell at him about it and that he shouldn’t be working with him as Andrew tells him that he will do whatever is necessary to capture James. Jesse tells Fiona that she needs to get Madeline and Charlie out of the house before anything bad happens. Fiona calls Madeline and subtly gets tactical information for her assault on the two armed guards in the house with them. Madelina takes Charlie into a different room so he won’t be in the line of fire. Simon and Michael go over how they’re going to capture James and Sonya. Simon states that he’s willing to do whatever it takes to complete the mission as well. Simon shoots the last of James cre and Michael loses it and assaults him. they engage in a hand to hand brawl. Michael is winning as Simon pulls a knife on him. Michael turns it around and plunges the blade into Simon’s chest. He falls to the floor dead.

The fight was initiated because Michel isn’t willing to sacrifice completing the mission without mindlessly killing when they could be taken alive.

The scene goes back to the boathouse where Michael is patching himself up as James and Sonya arrive. Michael tells him that James’s crew fought bravely. James admits that they should not have split up and Michael was right. Fiona prepares to assault the two armed guards in Madeline’s house. She plants breaching charges on a delay preparing for the assault. Andrew, Sam and Jesse approach the boathouse and load their weapons. Michael sees them outside the window walking through the compound. Michael describes that compromising yourself and the mission by letting go of your morals. Michael tells James and Sonya that if back up is coming from Simon it would be in the direction that Andrew is waiting. They move into the boathouse and find them gone. Sam tells Andrew that it blew up in their face hen he asks what happened here. Jesse informs Fiona of the situation. He tells her to stand down because the mission is not over yet and Michael nees to retain his cover. The two armed guards here her rip the breaching charge off the window and one goes outside to check it out. He comes back in saying it was nothing as Madeline supports that theory by saying it was probably the neighbor’s cat coming for milk again. James, Sonya and Michael arrive at his house and tells Michael to join them outside. James says he knows that there is a traitor in his unit and suggests that it’s Sonya. He pulls a gun on Sonya because they were the only two wo knew where they would be. He offers Sonya a chance to explain herself. James asks her what she did again and gives her 5 seconds before he shoots her in the leg. She tells him that she doesn’t know multiple times. Michael tells him that it was him who betrayed him and that he is working with the CIA as the scene cuts away.