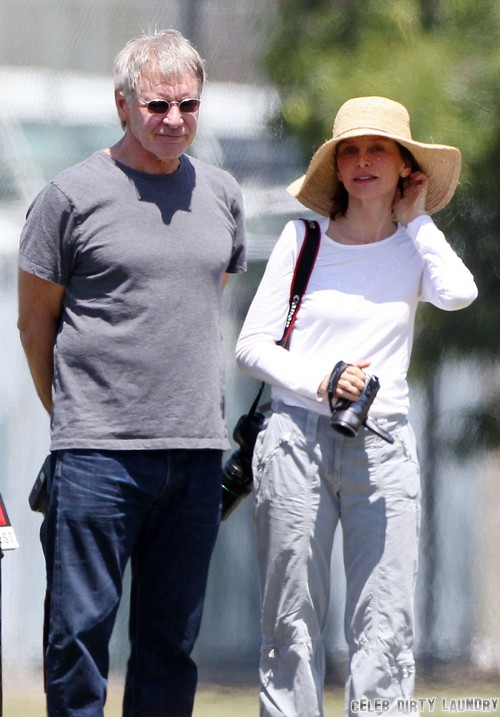 Supposedly Hollywood marriages are even tougher to maintain than the unions of regular people. Celebs have a mountain of cash and an endless stream of hot bodies around them at all times so it’s nice to see a couple that really is committed to making it work. Until now Harrison Ford and Calista Flockhart appeared to be one of those couples. Things have started to get bumpy for the duo though and it’s primarily due to Harrison’s work.

According to the May 27th print edition of GLOBE, Calista would really like her man to slow down a bit. He is getting older and she wants him at home more with their 12-year old son, Liam. Harrison keeps promising to slow down and he seems to mean it- until the next great script rolls in and then he decides to jump on it. He is currently filming Anchorman: The Legend Continues and then he has a bunch of other movies lined up including the latest Star Wars flick. There also may be a follow up to the Indiana Jones series in the making that would bring Harrison back to that beloved role as well.

Meanwhile, Calista hasn’t really worked in two years, not since Brothers and Sisters was axed. Perhaps the problem isn’t Harrison working so much, but instead Calista just needs to do a new project of her own. If she was engrossed in a new project it might change how she feels about his heavy work schedule.

But for now, his working all the time is starting to cause problems in the couples’ 11-year relationship. Calista is sick of feeling like a single mother and might be a tiny bit jealous of her mans’ career. Do you think these two will figure out how to iron out their differences, or is the writing on the wall for them? Tell us your thoughts in the comments below!

Harrison Ford and his wife Calista Flockhart at his son Liam’s football game in Brentwood, California on May 11, 2013.