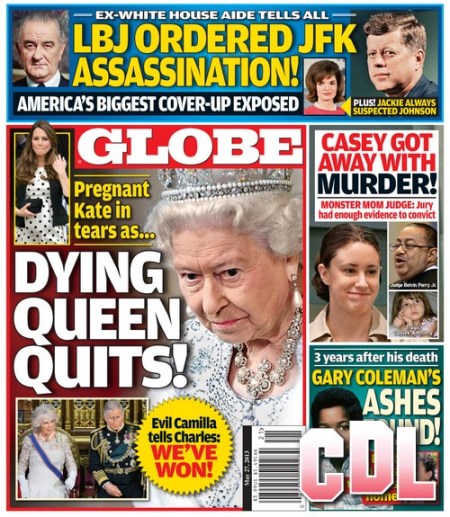 We haven’t had an evil queen in a long time and it looks like Camilla Parker-Bowles is getting ready to fully embrace the role as the single most despised royal in centuries! She has never been one to care that she is neither liked nor respected, just as long as she gets her way- the true definition of evil, right? Anyway, we have been telling you for months that Camilla has been raising holy royal hell behind the scenes to ensure that everyone knows that she fully expects to be on the throne as soon as Queen Elizabeth kicks the bucket. Ironically, the Queen’s son, Prince Charles, who actually is destined for that seat seems as though he could care less about it. If Camilla had half a brain she would at least pretend to rally behind her husband, but instead she’s more determined to wear the crown than he is!

The May 27th print edition of GLOBE continues to take its readers’ behind the scenes to get a good indication of the uproar that the palace has been thrown into. Queen Elizabeth’s life is most certainly winding down, not because of vicious rumors and innuendo telling us so, but because this Royal workhorse, who has never really missed obligations has begun canceling appearances. She also has handed extremely important Royal meetings and appearances over to Prince Charles. That speaks volumes in itself. GLOBE has been reporting on the queen’s declining health for months and the utter chaos behind the palace doors because of it.

At first it looked like Elizabeth was going to insist that Prince William ascend the throne next, but her actions as of late make it pretty clear that it’ll be Charles that proceeds her, sadly. While Charles, William and even Kate Middleton have done everything to help the queen and accommodate her every need, Camilla has been far more concerned about her Coronation as queen. While her husband prepares to oversee a country, Camilla has gone under the knife for plastic surgery because she believes she needs to look the part of a queen. GLOBE was first on that story with photos that prove that some nipping, tucking and a bottle of hair color aren’t enough to make Camilla look the least bit happy. But she believes she’s ready and is informing everyone in her path that she’ll be the next queen. Part of being respected means knowing how to carry yourself and this is clearly a lesson that Camilla will never grasp!

Also in the May 27th print edition of GLOBE you can read what the judge presiding over the Casey Anthony trial was thinking as the jury acquit the infamous and alleged baby killer. Even the judge was stunned by the verdict and insists there was enough to get that conviction! Also in the latest issue there is new evidence to indicate that perhaps LBJ was responsible for the assassination of JFK. It’s a mystery that never gets old and exactly the kind of case that GLOBE always keeps tabs on for its readers.

Obviously it’s another week of great reporting from the most informative weekly magazine out there. Grab your copy of GLOBE as it hits the newsstands today! You can rely on GLOBE to keep you up to date on all the top stories from Buckingham Palace, Hollywood, and wherever else the trail of breaking news leads. With a nose for the truth and the experience to track it down and uncover all the hidden details, GLOBE always remains my choice for an entertaining and informative read.