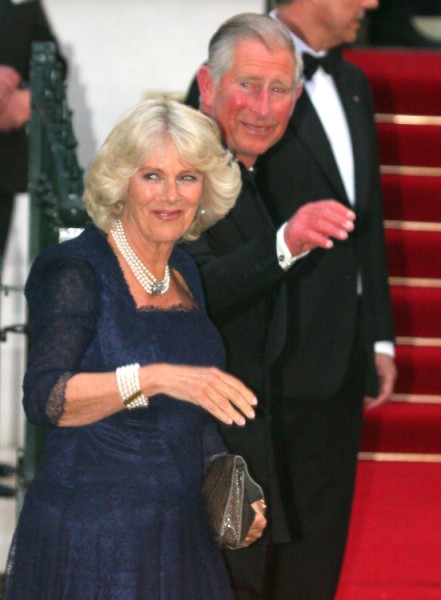 I don’t know if you’ve noticed but over the past few days the palace has issued a few critically interesting statements regarding the future of the monarchy. Not only has Queen Elizabeth announced that she’s cutting back on long-haul flights and sending Prince Charles to the Commonwealth Heads of Government Meeting (Chogm) in Sri Lanka in November but she also made her first born son accompany her to the opening of Parliament this morning. He hasn’t done that in 17 years. The royal family doesn’t do anything out of the ordinary just for the hell of it. What’s the message here? As Prince Charles’ king roles increase we can only assume Liz’s Queen roles will decrease. Is Queen Elizabeth sicker than we thought and is she going into an early retirement or is she just throwing her son a freakin’ bone after all these years?

Could it be a little bit of both? The Queen is 87 and has been dealing with stomach issues lately that some cautioned could have been worse than she let on. With her mother living to be well in her 100s we all sort of assumed she will get that far as well. Her mother wasn’t carrying on queen duties in her later years though. She was just able to relax and enjoy her money and her family. The Queen, who continues to take her role uber seriously, doesn’t have that luxury.

So this is a clear statement for all those out there who still think Prince William and Kate Middleton will leap frog over Charles and Camilla to take the throne. Sorry to break it to you but that ain’t happening. Charles is firmly where he wants to be. His head isn’t wearing the crown yet but it’s very close. And, perhaps, this is the best way to massage the people into liking him more. With the Queen’s guidance the people have a better chance of accepting him rather than just taking him after she dies. Is that what she’s doing? Is Queen Elizabeth abdicating (figuratively not literally) so she can guide the royal transfer?