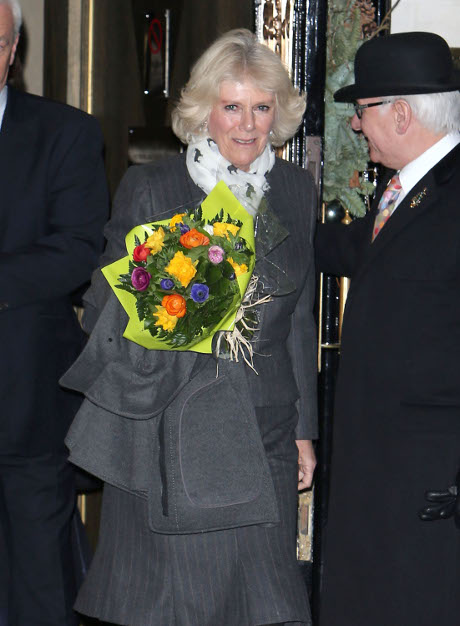 Camilla Parker-Bowles continues to act like a crazy person dead set on becoming Queen, and now she’s plotting to seize the throne from Kate Middleton and Prince William! It all sounds a bit like a super dramatic, over-the-top, unebelievable Lifetime movie, but the truth of the matter is this: The Royal Family is an epicenter for drama, and things are going to shake up even more over the next couple of months as The Queen finalizes her decision to make Prince William the King and, ultimately, Kate Middleton his Queen.

In the recent print edition of the Globe, insiders are saying that the Queen’s decisions have caused a dangerous feud that could have Camilla Parker-Bowles storming out of the palace–with a vendetta and all the Royal Family’s secrets. This would, to say the least, be very bad for the royalty. But the Queen has set her plans to save the monarch in motion; she recognizes that making Prince William the King is the best way to maintain the monarch’s longevity.

GLOBE January 7, 2013 print edition: insiders say her Majesty made her historic decision to make Prince William King in a bid to quell the turmoil that erupted behind the scenes at Buckingham palace since her health took a sudden turn for the worse. At the center of the furor is her eldest son, Prince Charles, 64, and his scheming wife, Camilla, 65, the Duchess of Cornwall, say sources.

Despite the Queen’s feisty 91-year-old husband, Prince Philip, ordering Charles to divorce, Camilla is fighting back and still plotting to seize the throne.

“Elizabeth is trying to stop the war before it rips the royal family apart,” says an insider who spoke exclusively to GLOBE.

“She broke the news to Charles and Camilla just before Christmas that he’s been passed over so the nation can be led by the vibrant young newlyweds, who can ensure the future of the monarchy. The news didn’t take Charles by surprise, but Camilla was enraged. Finally knowing she was never going to be Queen, sitting beside Charles, hit her like a bomb.”

“She was talking on her cell phone vowing Charles is going to pay for this big-time,” Camilla has threatened in the past to sue for a $50 million divorce settlement if she fails in her lifelong quest to be crowned Queen.

“You know the palace will have to pay if they want to keep her silent about all the royal secrets,” says a source.

Queen Elizabeth confirmed her monumental decision with William, 30, a week earlier during a secret meeting at Kensington Palace. “Elizabeth has gone back and forth on the issue over who would succeed her,” says GLOBE’s insider. “But she eventually promised William He’d hand the crown once Kate was pregnant with a new heir.”

Her revolutionary plan for the monarchy’s future has been created as good news by influential insiders. “This is what the royal family needs,” the source said, “but don’t think Camilla is going to go away quietly. She still obsessed with Charles winning the throne so she’s considered Queen. I don’t see her giving up that dream anytime soon, no matter what.”

What do you think about all this royal drama? Let us know in the comments section below, and don’t forget to check out the newest print edition of the Globe!