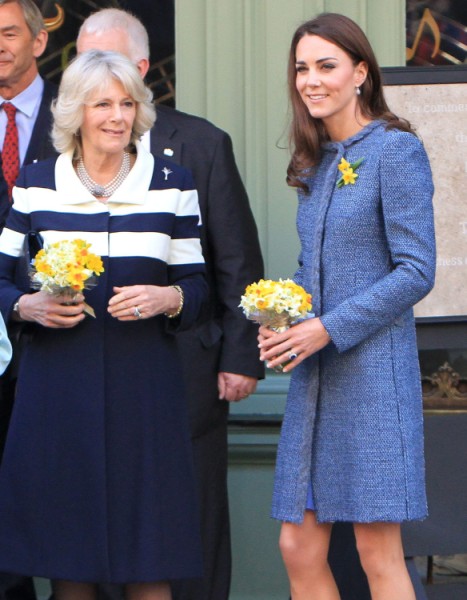 So I guess not showing up at Sandringham for Christmas is kind of like falling asleep first at a sleepover – you get hazed pretty bad and luckily Kate Middleton has a friend like Camilla Parker-Bowles. While all the royals were unwrapping presents under the Christmas tree Camilla received a present from her ex-husband Andrew Parker Bowles. Apparently they’re still close and seem to have a pretty fun relationship. They obviously still have the same humor because the gift was a Matt cartoon ripping on Kate Middleton’s topless photo scandal. Remember when Prince William tried to blame everyone and their mother? Ya, it makes fun of that.

And to make matters worse, it’s not like this was just a newspaper clipping in an envelope. Parker-Bowles purchased it in a gallery and had it framed for Camilla. So… I’m dying to know… did she open that in front of the Queen? Is this a running inside joke for the royal family now? I just can’t believe that it is. Do you remember how crazy William got? It supposedly caused trouble between William and Prince Charles because Charles wanted William to ignore it but instead William tried suing and jailing everyone.

Will Camilla hang it? Is she innocent here? She didn’t ask for the gift but the fact that she received it from an intimate friend kinda tells you that she’s laughed at Kate and her scandal before. Do they have a close enough relationship to do that? I doubt control freak Kate would find it all too funny and I KNOW William wouldn’t. I wonder how this will affect the Kate Middleton/Camilla Parker-Bowles detente in the future. Cat’s out of the bag now. Thanks to the Telegraph, everyone knows Camilla got the gift. Is this why Camilla high-tailed it out there so quickly after Kate and William showed up for Boxing day?

What do you make of the gift to Camilla Parker-Bowles? Kate Middleton’s topless photos were one of the biggest scandals of the year. Has enough time passed that the royal family can joke about it or are Camilla and Kate not as tight as they want everyone to believe? I can’t see her dismal approval rating going up after this, can you?