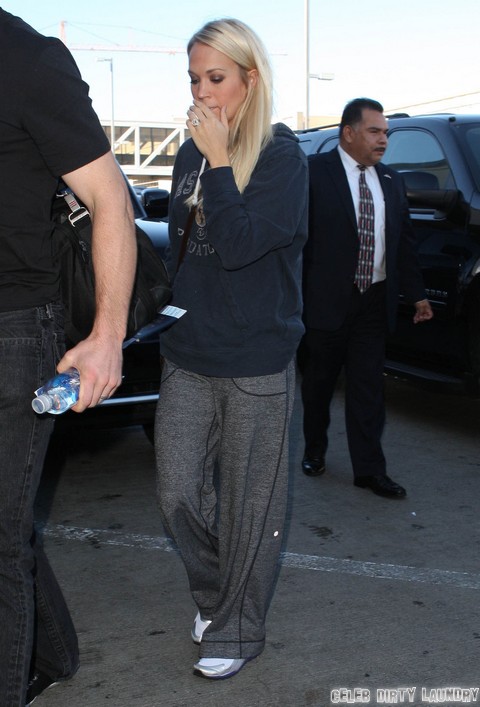 Would Carrie Underwood really cheat on Mike Fisher, her NHL husband of three years? Well, if the rumors are to be believed then yes, she and Brad Paisley have been hot and heavy for months. He has been married to his wife Kimberly for over a decade and appears to be happy at home raising their two children together. The problem is that when Brad and Carrie get together the chemistry is ridiculous and they get along a whole lot better than she does with Mike.

Carrie has always had a bit of a prickly personality and according to the Dec. 2nd print edition of the National Enquirer, she and Mike have been fighting a lot over starting a family. He is ready to really settle in and have kids while her reaction is to tour more and run herself into the ground. Carrie and Mike aren’t on the same page at all and sources say that she has spent months confiding in Brad, allowing him to cheer her up.

When Carrie was in NYC recently to rehearse for her live upcoming performance of The Sound of Music her husband was nowhere to be found, but Brad stopped in to see her on set instead. That sure raised eyebrows and caused those close to her to question what’s really going on behind the scenes. Do you think that Carrie would cheat on Mike and maybe the even bigger question is whether or not she would have a hand in busting up a family? Is Carrie and Brad’s friendship innocent or is their a whole lot more going on between them behind closed doors? Tell us your thoughts in the comments below!