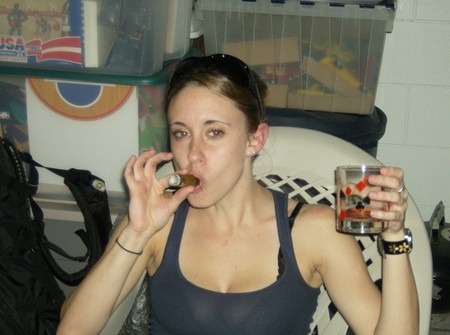 With recent events, the state of Florida hasn’t been looking good. Right now just when everyone is going on over the controversial not guilty ruling that Zimmerman received people can’t help thinking about obvious murderers who have gotten off – like O. J. Simpson and Casey Anthony. We all remember Casey Anthony don’t we? Well then guess what. The infamous baby killer is pregnant again.

Apparently no one thought it was smart to neuter before her release so now the woman who killed her toddler so she go out to party is pregnant again. When she was previously pregnant she had the support of her family. That’s no longer the case when she went around accusing her relatives of sexual abuse and still gave her mom a death glare even after the woman lied on the stand for her. The only people she now has on her corner is her unpaid lawyer and weirdo fans. Does this new support system honestly believe they can stop a repeat?

All the reasons that were given, after her first daughter’s death, was that she was young and immature. Basically that she didn’t know any better. Are we to believe that several years on she’s matured past infanticide? I don’t really believe that certain things can be taught.

There is simply too many things that can go wrong. But we do know that if God forbid she tries to pull the same stunt she won’t be able to actually do it again. Now everyone knows what she’s capable of. The OB/GYN, strangers that pass her on the street, and the lawyer that will always have his career tied to her; will be on the look out.  Anyway I doubt her mother won’t fight for custody once the baby is born.