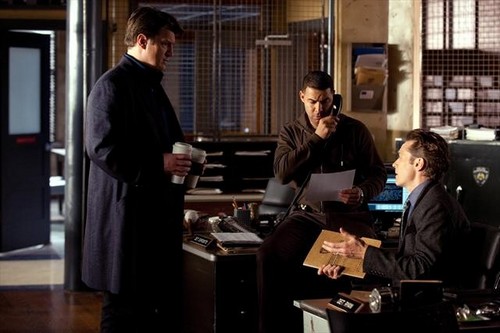 Tonight on ABC their hit crime drama CASTLE returns with a new episode called “Recoil.” On tonight’s show a murder victim may be Beckett’s key to taking down Senator Bracken, the man behind her mother’s murder. Did you watch last week’s winter premiere episode? We did and we recapped it here for you!

On last week’s show when Beau Randolf, the founder of hit adult video franchise “College Girls Gone Crazy,” was murdered, Castle and Beckett were confronted with a lengthy list of husbands, fathers and ex-college girls who all had motive. So to find the killer, they had to delve deep into the victim’s life, where they found surprises at every turn. Alexis started a video blog, but Castle was not happy that personal and intimate details about her life were being made public.

On tonight’s show while investigating the murder of a young woman, Castle and Beckett find evidence that links her death with Senator William H. Bracken (guest star Jack Coleman returns), the man responsible for Beckett’s mother’s murder. Determined to finally bring Bracken to justice, Beckett soon realizes that things are far more complicated than they seem.

RECAP: A homeless man finds a dead body in a trash can, it turns out it is a female, Melanie Rogers and she was an Engineer from New Jersey. She called her half sister Julie before she was killed, so they bring her in. Castle and Becket interview her and she tells them that two nights before she died she met someone but wouldn’t tell her anything. It turns out that her sister called her at 4pm, but she didn’t answer, but she did leave a message that said if anything happened to her, tell them XT3. Becket hears a noise on the message, some sort of click, it turns out it is a lighter.

It turns out that Melanie was meeting someone at the Sandish hotel just before she was killed. Becket and Castle head over there and find out that she has been at the hotel before, a few times and she was with Senator Bracken and she probably became a liability.

Castle and Becket figure out where the parking garage is that Melanie made the call from and they head over there with Ryan and Esposito. They find a car and there are pictures inside that clearly shows that Bracken is not the killer, but the target.

Senator Bracken shows up at the station, Gates thinks he should postpone an upcoming conference and he doesn’t want, so she tells him that she cannot guarantee his safety. Bracken says he won’t be affected by some wacko and finds out that Becket is leading the investigation, the same person that thinks he is responsible for her mother’s death.

In private, Bracken calls the situation ironic. Becket tries to get right down to business, she wants to know who would want to kill him.  Becket makes it clear, the person who killed Melanie will be brought to justice, no matter how long it takes.

They have sketch of a suspect who was at the conference where Melanie was last seen alive and who was acting strange.  Becket and Castle are going over threatening mail that Bracken receives and Becket finds a clue, she knows it’s her big break and it is going to lead her right to the killer.

They think they have found their guy, Becket, Castle head to an apartment building and Becket finds him and let him run. Becket tells Castle that McMannus threatened Bracken  because he thinks he killed his son and now it turns out that he built a bomb. Becket is feeling guilty because she let McMannus flee and didn’t shoot him, but Esposito and Ryan find him on the roof.

The case is over, but Becket is looking at photos of the vest that McMannus was supposedly haven made and she thinks it is too well made. What she is thinking is that there is more behind the story and McMannus was set up. She knows this sounds crazy, but if she is right.

Becket approaches Bracken and tells him what she thinks but he thinks she is doing this on purpose and promises that if his important conference doesn’t go as planned, he is going to bury here. The bomb squad turns up nothing, but while Becket and Castle are outside, they here a clicking sound and it turns out they find their killer who is clicking a lighter and he has put a bomb in the limo that Bracken is just about to get in to. Becket saves Bracken’s life, it turns out it is his driver who wanted him dead and he is not that shocked. In the driver”s apartment, they find gloves with Melanie’s DNA on it and also a mask, he is the killer.

Bracken has his suspicions on who is behind all this, someone was paying the driver but he won’t tell anything. Becket walks Bracken out of the station and he pretty much thanks her for saving his life and tells her that he guesses that he is in her debt now.