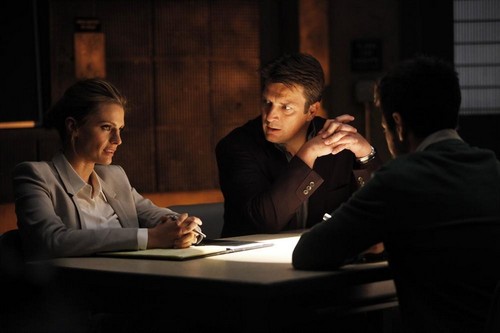 Tonight on ABC their hit crime drama CASTLE returns with a new episode called “Time Will Tell.”  On tonight’s show while Castle & Beckett investigate a grisly murder, they meet a suspect who claims he’s from the future.  Did you watch the last week’s season 6 episode 4? We did and if you want to get caught up, we have a full and detailed recap, right here for you.

On last week’s show a desperate young murder suspect, Emma Briggs, (guest star Alicia Lagano, “The Client List,”) takes hostages at gunpoint then mysteriously insists that she will only negotiate with one person: Richard Castle.

On tonight’s episode a grisly murder investigation leads Castle and Beckett to a suspect (Joshua Gomez, “Chuck,” guest stars as Simon Doyle) who claims he’s traveled back in time to stop terrible events from unfolding, events that will change the course of human history. Is he simply a deluded killer, or is it possible that he’s telling the truth?

An elderly man followed a blood spattered path is his apartment building one day and found a victim dead after evidence of severe torture. The victim is Shawna Taylor and she’s a parole officer. After such a gruesome scene Esposito speculates that it was probably one of her parolees.

Later Kate and Castle go to inform her family over her death. Her step-brother wasn’t really close with her and he always hated her job. He felt it was too dangerous. A sound reason especially after she had admitted to him she felt as if she was being followed.

The police have a sketch on their suspect. He doesn’t match any police database so they know he wasn’t one of her parolees but he does match the photo of Shawna’s stalker. He had confronted one day sprouting the end of the world and that he needed her help. Obviously he was taken as crazy and put on psychiatric hold until his release.

The patient during his confinement was recorded as saying he needed to save Shawna. That he had to or else everyone else is dead. They don’t know who he is. Yet their John Doe was caught breaking back into Shawna’s apartment. The police capture him on the scene and the only story they got was that he was from the future.

He’s backstory is interesting. His type of crazy is only understandable to Castle. It’s Castle that gets answers from the suspect. Far out there answers. As he’s doing so, Kate is doing her best not to laugh. All she wants to know is what happened to Shawna. With Doyle’s fingerprints on the weapon, she feels like she got the guy but Lanie tells her otherwise. Their suspect was still in an padded white cell during the crime.

The only thing they have to gone besides Doyle is that Shawna had tryst the night she died. Retracing her steps they found she had hooked up with a hooker. The hooker apparently came onto her because she had to do a favor for a friend of her “manager”. Her job was to get Shawna’s keys a deliver them to the man that did want them, Ward.

Ward had served time with the manager but they weren’t friends. Everyone was scared of Ward. He was simply that cold of a person. Yet when the cops try to do a background search on him it’s as if he didn’t exist before six years ago. That fact coupled with testimony on why Ward wanted to see Shawna (he said he was on a mission) makes the whole time traveling scenario seem less weird.

Castle loves this. He has to take his mind of Alexis moving with her boyfriend and time travelling is just the thing to do it. Sure his daughter is hanging up but now he has one of his theories coming to life.

There is one connection between Shawna and Ward. Her stepbrother. Ward was trying to find the stepbrother which he knew would be easier once Shawna’s only family started to cooperate with the police. The stepbrother was theoretical physicist. People suspected his new research would create a black hole.

If he was right in creating new types of energy that would be world changing news and his death stopped that. Just like Doyle had tried to tell them. Doyle isn’t available for answers at the moment because he disappeared in lock up.

It’s too already. Ward got to the physicist.

Their hunt for Ward leads them to an energy plant and oddly enough Doyle. Ward was beating the life out of Castle and Kate when Doyle came in to rescue them. His efforts get him handcuffed by Kate. She doesn’t trust him and lifesaving didn’t change that. His helping with the case might. Ward was killing people in order to reach an ultimate goal. There was someone at the end of that chain. A Mr. Deschile.

Someone Doyle claims to know all about. Deschile was the guy that helped saved the world in the future. Without him billions will die. He claims there was something called the Energy Wars. Some people of the selected few had it and left everyone else to struggle. Once he finishes relating that story, Kate has Doyle taken away. She won’t trust him but she will protect Deschile.

They save the Deschile, a college student, but they can’t get answers out of Ward. He won’t admit to nothing. As Ward goes in, Doyle is let out. His lawyer said they can’t hold him anymore. Anyway what does it matter? The cops have found a way to neatly tie the case together so it wouldn’t matter what he has to say.

The real question was if Doyle was from the future? Because he does disappears into thin air and sometimes things look too big to a coincidence.

Alexis did move out.