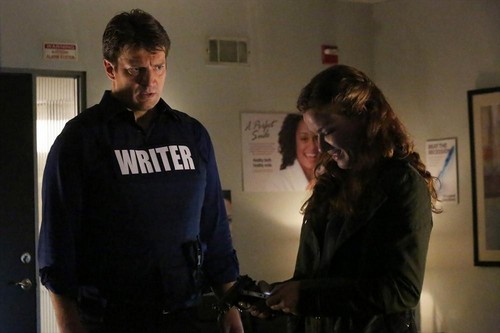 Tonight on ABC their hit crime drama CASTLE returns with a new episode called “Number One Fan.”  On tonight’s show a fugative takes hostages and then mysteriously insists that she will only negotiate with Castle.  Did you watch the last week’s season 6 premiere episode? We did and if you want to get caught up, we have a full and detailed recap, right here for you.

On last week’s show with Beckett still in D.C., Castle and the boys investigated the murder of former child star Charlie Reynolds, who rose to fame playing the lovable nerd on an early 90s High School sitcom. But the case took a turn for the strange when Agents Beckett and McCord arrived from Washington to take over the investigation, creating competitive tension in the precinct. But why would a washed-up actor’s death warrant Federal scrutiny? Beckett and McCord were not telling. Meanwhile, Castle had to contend with a new face at the 12th, NYPD Detective Frank “Sully” Sullivan.

On tonight’ show A desperate young murder suspect, Emma Briggs, (guest star Alicia Lagano, “The Client List,”) takes hostages at gunpoint then mysteriously insists that she will only negotiate with one person: Richard Castle.

Tonight’s episode opens up on an apparent murder. The police were quick on the scene and nearly missed their prime suspect escaping down fire escape. The cops thought they had her when they were able to signal to their men on the ground but no one suspected she would enter a dental office and take hostages.

Meanwhile Castle and Kate are his place trying to come up with plausible jobs Kate can do. She got fired from the FBI and the NYPD has a hiring freeze There is no way for her to be a cop right now. She also doesn’t want to be living off of Castle no matter how he tries to sell the idea. She couldn’t live day in and day out with Richard’s mom, daughter, and daughter’s boyfriend. They don’t quite understand boundaries. However she thought she was an getting a lucky escape when Alexis says the Chief was on the phone only to find out it was Castle.

He got called into the hostage situation. Kate follows him of course but she won’t be able to help as much as she usually would. The kidnapper/homicide suspect, Emma is a big fan of Castle’s. She was willing to set free a woman and child in order to get Castle to come inside the building to talk. It seems she’s not used to the whole “demands” discussion. The only demand she has is for Castle to prove she didn’t kill her boyfriend.

She explains to him that she loved Angelo. She even thought he was going to propose to her and that’s why she went home late. She wanted to have the perfect dress. But when she got back to her apartment everything at first looked alright until she noticed a dead boyfriend in her living room.

Outside, Kate manages to get the Chief’s approval to work the case. She wants to find out if Emma is lying or not. Funnily enough there’s all this evidence that have the detectives believing she killed her boyfriend. She was on anti-psychotic medication and although she told Castle she had one glass of Scotch, the detective on the scene found an empty bottle. They tell Castle all of this and he does his best to speak to Emma. Is it possible she forgot she killed him.? Because there was a text message sent to the victim from Emma’s phone inviting him over that night.

Emma was just starting to doubt herself when Castle notices her text messages. The one sent that night was different than all of her normal messages to her boyfriend. Finally feeling validated, Emma bags her phone and gives it to Castle. She needs him to take the evidence and go out to investigate her case.

Castle goes to the police station and there he remains the only one to believe in her innocence. The Chief is willing to give him peace of mind. She knows better than to discount his theories. He’s teamed with Kate and the newbie Sully.

The boyfriend kept disappearing on trips upstate. Sully found burglary equipment in the man’s car. So the only assumption they can make is that Angelo got involved with dangerous people. Emma doesn’t want to believe but she better because the proof against her keeps mounting. Emma has a past history. At 16 she lured her foster brother into the basement and killed him the same way as Angelo.

Castle was supposed to hide his reaction to the news yet Emma knew. She swears she didn’t kill Angelo. That former situation has an explanation. Her foster home wasn’t a paradise. When her foster brothers tried to attack her, she fought back. The brother that survived that night is in prison. Even if he was out, she changed her name and kept under the radar.

But her Care System for foster kids she was in did get broken into. Castle thinks Angelo broke in to find Emma’s biological parents. He wanted to let her know seeing as she always dreamed if it. They were making that revelation when one of the hostages decided to be a hero and get the gun from Emma. They struggle and it goes off hitting Castle. He’s fine. He also even surer now that Emma isn’t a killer. What if Emma’s biological parents didn’t want anyone to find out a connection to them? The cops check it out and they realize someone unsealed Emma’s juvenile records a couple days ago.

Esposito and Sully find the gift Angelo had wrapped. It reveals that Emma’s parents is one dead woman, insignificant really, and a wealthy businessman that rumor has it is looking to run for the Governor’s seat. He paid his lawyer to bring a guy down at the records to unseal Emma’s juvenile records.

The Chief doesn’t want her officer risking her careers. Stokes plays golf with the commissioner. She and Kate will be handling the interview. Mr. Stokes never heard about Angelo contacting him. During the time of the visit he wasn’t there. His son-in-law was. The man that also serves as his lawyer.

He knew a trust fund was getting set up for his wife and if another daughter appeared on the scene then the money would have to be split. So he killed Angelo thinking it would all end there.

Stokes got to meet his new daughter and he’s going to help her with her legal troubles. As a way of saying thanks he got Kate a job back on the force. She and Castle truly helped his daughter.