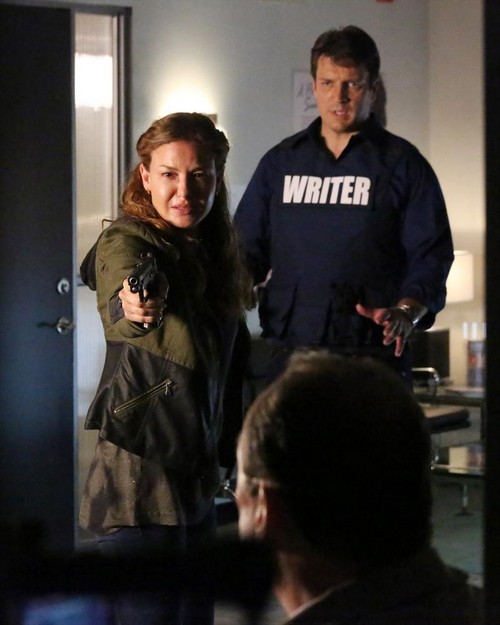 Tonight on ABC their hit crime drama CASTLE returns with a new episode called “Need To Know.”  On tonight’s show Castle has to contend with a new detective in trying to solve the murder of an early 90s star.  Did you watch the last week’s season 6 premiere episode? We did and if you want to get caught up, we have a full and detailed recap, right here for you.

On last week’s show continuing from the season premiere episode, Beckett raced against time to find a stolen toxin capable of killing tens of thousands of people. To make matters worse, Castle was exposed, leaving him with less than 24 hours to live.

On tonight’s show with Beckett still in D.C., Castle and the boys investigate the murder of former child star Charlie Reynolds, who rose to fame playing the lovable nerd on an early 90s High School sitcom. But the case takes a turn for the strange when Agents Beckett and McCord arrive from Washington to take over the investigation, creating competitive tension in the precinct. But why would a washed-up actor’s death warrant Federal scrutiny? Whatever the reason, Beckett and McCord aren’t telling. Meanwhile, Castle has to contend with a new face at the 12th, NYPD Detective Frank “Sully” Sullivan (Joshua Bitton, “The Pacific”). Antonio Sabato, Jr. (“Melrose Place,” “General Hospital”) guest stars as Ramon Russo, the victim’s former sitcom costar.

A body was found on a construction site in NYC. A random jogger spotted it on his run. The victim’s name was Charlie Reynolds. Martha had met him from work. He was apparently a former child star. Because of the high profile case this will be, Castle volunteers his “services” to the NYPD on this one. They try to reject him in more ways than one but he refuses to go away and so they allow him on the scene…reluctantly. Especially one he told Esposito and Ryan that Chief Gates was out of state at a conference.

Their first suspect was Charlie’s agent. She had called Charlie and left threatening phone calls. Like I’m going to kill you talk. Castle thought crazed fan at first but more and angry woman who found out she got cheated. Charlie’s bank notice was mailed to her place by mistake. She thought he was barely getting by when in fact he cashed a check for over a hundred grand. He must have cut her out of a commission for a job that big.

Returning to the station Castle finds the guy that replaced Kate to be nothing more than a slob. He was just about to take him to task when he got in trouble. It seems Gates’s conference ended early. She’s upset he weaseled onto their case. Now that Kate isn’t there his special privileges got erased.

Well just his luck that Kate is there. The feds are taking over the case. They won’t say why seeing as they are not at liberty but the NYPD will be working the case and reporting to Rachel and Kate. Her former friends don’t like that. Esposito and Ryan can’t even get the full report from the coroner. He says certain things are classified.

At least they got a second suspect. Ramone (Antonio Sabato Jr.) was a co-star on Charlie’s former show. He was doing a reunion movie where surprisingly Charlie kept forgetting his lines. The two men fought and Ramone went home after telling Charlie to get his act together. Something was bothering Charlie onset and it enough to distract him in his comeback.

Maybe it was the director. The same director that has been known to embezzle. Yet it’s not him either. Sure he’s callously recasting Charlie’s role the same day he died but he’s not embezzling this time. He would never mess with the Russians. They’re financing the movie and he wouldn’t risk it.

Without any more suspects, Esposito and Ryan tell Castle to go sugar up Kate. In order to prove his loyalty of the cops vs. the feds. Castle does give his best effort but Kate still calls him on it. He didn’t get anywhere with her and the best news is the guys won’t haggle him on it. They were able to trace what Charlie was looking into. The Russian backers sent film “equipment” to a warehouse. All evidence show that was Charlie’s last stop and the guys follow his lead. They arrive to find shipments of guns. They also find Rachel and Kate.

The ladies didn’t know anything involving guns. All they did was retrace Charlie’s last movements. The great battle begins again over who gets to take the guns in for evidence when the jogger who found Charlie pulls a weapon on all of them. He’s not the killer. He’s actually C.I.A.

The C.I.A was using Charlie to spy on a notorious Russian gangster. His cover may not have been blown and to keep that the feds have to lay off and the NYPD have to stop investigating. The guys don’t like that. They don’t like how Kate is so easily taking orders to back down.
Before Kate returned to Washington she gives Castle footage on Charlie last movements. It looks like she’s a true blue after all. From the video they were able to see the person tracking Charlie. The actress playing his love interest in the movie. She’s also the Russian gangster’s niece.

Now that there’s proof someone from the “family” knew about Charlie, the investigation is back on. The niece though didn’t want to spy on Charlie. She wanted to convince not to take her family down. She was his girlfriend and all she wanted to do was run away with him. That apartment Charlie was renovating was all a front. He was giving it away to a friend.

He was giving it to Ramone. He knew Ramone would be out of work once he pulled out of the movie. But Ramone didn’t want to accept anyone’s charity. He killed Charlie for letting him down. While the girlfriend, Svetlana, is forced to take over from Charlie.

Kate doesn’t agree with how the CIA is forcing Svetlana and so she makes an anonymous tip to a TV show outing the girl as someone with Russian connections. The feds can no longer use her and she’ll be relocated just the way Charlie wanted.
Her boss found out what she did and they fired her for it.