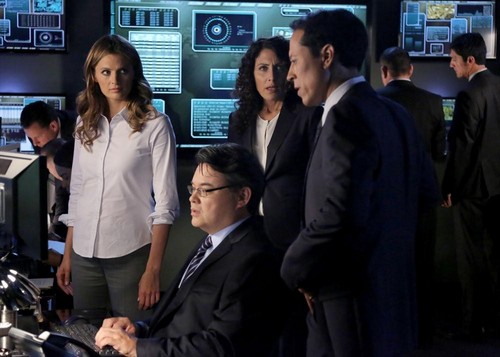 Tonight on ABC their hit crime drama CASTLE returns with a new episode called “Dreamworld.”  On tonight’s show Beckette races against time to prevent a chemical weapon from killing thousands of people.  Did you watch the last week’s season 6 premiere episode? We did and if you want to get caught up, we have a full and detailed recap, right here for you.

On last week’s show the action picked up this season right where we left off on the swings.  Castle and Beckett dealt with the consequences of their decisions against the backdrop of a high-stakes investigation.  The premiere ended with a major character’s life in tremendous jeopardy.Guest cast for the episode included, Lisa Edelstein (“House”) who will guest star in a three-episode arc as a tough and highly-skilled Federal investigator whose appearance plays a vital role in Beckett’s decision about her future.

On tonight’s show continuing from the season premiere episode, Beckett races against time to find a stolen toxin capable of killing tens of thousands of people. To make matters worse, Castle was exposed, leaving him with less than 24 hours to live.

Castle doesn’t want to believe he’s dying. The only antidote that was made just happened to be stolen the same time as the virus. The clinic could make more but it would take a week. Kate wants to reassure him and yet she could only do so much. He knows when her too well. That’s how he knows she doesn’t have any leads.

As he gets stuck with the doctor in charge, she has to investigate with her very new team. Castle has more hours than his kidnapper gets. After all he was in the car for minutes instead of hours. He’ll still be dead in a day though. Knowing that he can’t help offering his help to the feds. If he’s going to die then he should go out with a bang.

The feds will take his offer on one condition; he can’t leave the building. All fieldwork will be handled by Kate and Rachel. Thanks to Castle’s clue they were able to track down a reporter who wrote an article on “Dreamworld”, the top secret military operation.

At first the guy doesn’t want to talk. He thinks they’re the same guys that killed his story but after they tell him about Bronson’s death then he’s willing to listen. He tells them all he knows and even goes a far as to say who killed his story. The Secretary of Defense personally called him to shut everything down. This case keeps getting more bizarre.

Kate and Rachel go to the Secretary’s office. He was willing to tell them about who and what Bronson did for the war effort. He apparently lead a military strike that knocked out one of Al-Qaeda biggest bases. No one was supposed to know about this operation and due to what Bronson did the terrorist were never able to recover.

What’s happening could all be retaliation. The terrorist may have gotten their hands on a chemical weapon that can kill with every breath a civilian were to take. Now that they know who to look for they have a whole group of people that could be on it. Including a man, Rashid, that lost several family members due to Bronson’s air strike. With what happened to him, it would be easy to become an extremist.

Their new suspect won’t crack even as they show him a picture of Bronson. He tells them he wasn’t following Bronson. Surprise Surprise it was the other way around. Bronson had followed him because Rashid was the only witness to what went down after the air strike. Like the act Bronson stole a servant’s girl’s body from the scene. Bronson thought Rashid told when he didn’t.

There was more to the mission than what their superiors are telling them. They were given a file with about 80 percent of it blacked out. The team has to know the truth. It’s the only to stop an oncoming disaster.

They listened to the audio from the strike. They realize the “servant” Bronson carried out was an American operative. The Secretary of Defense allowed an operative to die just to know out a base. Then he made Bronson cover it up. The man wasn’t in his position then and in fact his star was on a rise due to his actions on the war front. He has a perfect excuse to wanting to get rid of Bronson.

Kate was told not to push it but then she saw Castle. She’ll risk losing her job but not her fiancée. She confronts the secretary at his home and is shut down. If she thought he would risk his position over casualties then she was wrong. He made her to her boss the moment he got back to his house.

Kate isn’t fired. She’s warned. Just in time as they get their biggest lead. The reporter from earlier, Brad, forgot to mention that he was the fiancé of the operative that was killed.

They got out to find Brad and this time Castle can come with. Except for a brief call, Castle has been ignoring his mother and Alexis. Going out with the team will allow him to spend his last hours with Kate. Who knew the feds allowed romance.

Kate works better alongside Castle. They’re able to deduct more. For example if Brad wanted to have revenge on the Secretary then he wouldn’t kill him. He would kill his wife. They arrive on the scene but Kate has to go in alone. Castle is too sick.

She learns he already poisoned the Mrs. And so she chases him. Thanks to Rachel’s help; they got him and the antidote. Their actions allowed Castle to be able to wake up again. Unfortunately Alexis brought her new boyfriend but other than that he was happy.

If only Kate could say the same. She thought the Secretary would get punished for his involvement when Rachel informs her that part of the story has to be buried. Things aren’t that black and white in Washington.