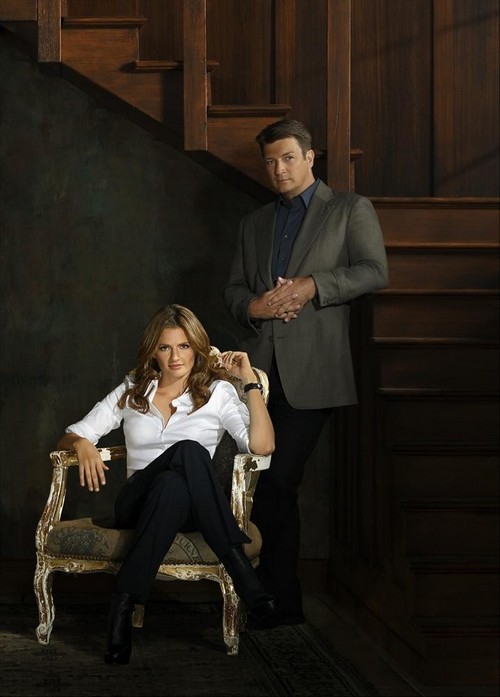 Tonight on ABC their hit crime drama CASTLE returns with a new episode called “Valkyrie” and it is the season premiere.  On tonight’s episode will Beckett says yes to Castle’s proposal? Did you watch the last season’s finale episode? We did and if you want to get caught up, we have a full and detailed recap, right here for you.

Last season ended with Beckett wrestling over whether to take a high-profile job in DC — a dilemma made more complicated when Castle proposed to her.

The action will pick up this season right where we left off on the swings.  Castle and Beckett will deal with the consequences of their decisions against the backdrop of a high-stakes investigation.  The premiere ends with a major character’s life in tremendous jeopardy.Guest cast for this episode includes, Lisa Edelstein (“House”) who guest stars in a three-episode arc as a tough and highly-skilled Federal investigator whose appearance plays a vital role in Beckett’s decision about her future.

Castle is expecting a “yes” to his proposal but that’s not Kate’s first reaction. Shock, then gratitude he’s not breaking up with her, and ending with Kate being ambitious. She doesn’t want Castle to think she’ll give up her dream job just for him. But after he says he wouldn’t stop her from following her dream that’s when she finally says “Yes”. She may have given him a fight and luckily none of it mattered.

Kate started her new job as a federal agent but it isn’t as easy as she thought it would be. Technically she hasn’t even moved out of training yet. Sorry to say it, Kate needs the extra training. She’s not as quick as on her feet without Castle backing her up. Then there’s Castle. Those two are still in a relationship although their situation is making it hard.

A long distance relationship was always going to be that way and that was before her new job kept her busy. She hasn’t seen Castle in weeks. Just when she thought she had free time low and behold a new case arrived. That’s sad. Castle really needed right now. His daughter, Alexis, is back from her trip early and she brought a friend. A male friend that she has surprisingly moved into her dad’s place without any notification. If Kate was there she would have him think rationally but she’s not. Now there’s no telling what Castle might do.

It’s not fully Kate’s fault. Castle was the one to cancel their last meeting. Still that doesn’t stop Kate from going home to an empty place at night. Fortunately Castle is striving to keep the romance alive. He surprises her in D.C. for a happy reunion. If jumping out of shadows in a woman’s apartment count as a surprise. It’s a great thing Kate sees he’s trying. Later when he sees her working on her case; he volunteers himself. He figures if he helps close the case then there’ll be more time for them. She says no and has to quickly rush off with her new partner, Rachel.

Kate didn’t know she left behind evidence in her rush and Castle decides not to call her up to tell her. He thought it would best to call Esposito and Ryan back in New York. He doesn’t tell them he’s snooping. He says he’s working on a new book. He manages to rope them in with the promise of Knicks tickets. However when they find out that he has them working on a real case involving the feds of all people they quickly call him on it. Castle can’t explain himself so he quickly hangs up.

Castle and Rachel have only recently started getting along. Rachel appreciates how she’s working their new case. Too bad all that goodwill flew out the window. They arrive on the scene to investigate and find out that Castle is already there asking questions. Rachel gives them both a warning before she leaves Kate to teach Castle a lesson. She could have lost her job if Rachel reported them and he could go to jail.

Kate returns to her office and found out that Rachel really did cover for her. Rachel had told her she made a mistake early on as well but it was only one mistake. Kate took the lesson to heart. Even though it could be too late. Castle was seen following the case and someone took snapshots of him. He had just finished his call to Kate promising to make her dinner when someone kidnaps him at gunpoint. His kidnapper is driving and demanding answers at the same time. He was trying to get what the feds knew when he had a seizure.

The feds arrived at the car accident scene and the moment Rachel saw Castle she gives up completely on Kate. She has Castle taken into custody. Kate’s new boss grills Castle to find out everything he knows. Never fear the feds have footage of Castle being abducted. They know he’s not a suspect but they’ll treat like one to make sure he learns his lesson. Anyway he did help with the case. Castle provided them with the tip “Valkyrie”.

As her new team hunts down the lead, Kate was put in charge of talking to Castle. She talks him into going back to New York. They can find other ways to keep their relationship fresh. It didn’t necessarily be as it was before. Castle has to return to NY. The land of Alexis’ sloppy boyfriend. It seems he has to stay with them for a while. Somehow he lost his passport.

Needing someone to talk to, Castle turns to his best buds. He’s talking to Esposito and Ryan about everything that happened in D.C. Until he brings up what his kidnapper was ranting. Esposito recognizes what the kidnapper was discussing. It was a complete Top Secret Black Ops mission that happened in the Gulf. People aren’t even allowed to talk about it.

Kate and Rachel found the suspect’s girlfriend. She tries to tell them her boyfriend was set up but don’t girlfriends always claim that. Kate believes her but Rachel needed some convincing. The building that was robbed had other floors. They were so focused on one thing that no one realized it was a diversion. The eighth floor was confidential. As a fed Kate didn’t even have clearance. It was through Kate and Rachel’s research do they find out that an air base weapon was created and used to kill their suspect. It was put into the man’s car. The very same car Castle was also in.

Castle was looking into military ghost bases when the agents showed up. He thought he was in trouble and couldn’t understand why they took his blood. Kate does eventually pop in and explains everything and they she has to do what she fears the most. She has to give him the results of his blood test.

The poison is in his blood stream.