BY Kristine Francis on May 13, 2013 | Comments: one comment
Related : Castle, Recap, Television 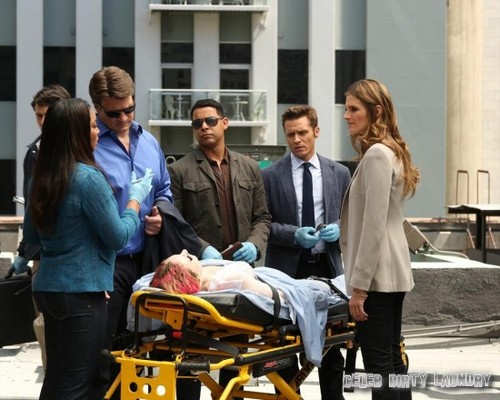 Tonight on ABC their hit crime drama CASTLE returns with a new episode called “Watershed” and it is the season finale.  On tonight’s episode Beckett reconsiders what she wants out of her job — and from her relationship with Castle. Did you watch the last episode two weeks ago? We did and werecapped it here for you!

On the last episode when Homeland Security inexplicably sealed the crime scene of a car bombing, Castle and Beckett found themselves with two mysteries on their hands: who murdered the victim, a government whistle-blower, and why are federal agents trying to take over the case? The plot thickened when they discovered that the victim wasn’t killed by a car bomb but by a missile from a military drone.

On tonight’s show in the Season Finale, an interview with a high-profile federal law enforcement agency forces Beckett to reconsider what she wants out of her job — and out of her relationship with Castle. Meanwhile, the body of a young woman is found floating inside the water tank of a skid row flop house, but as the team investigate, they discover that her final resting place is just one of many strange things about her death. 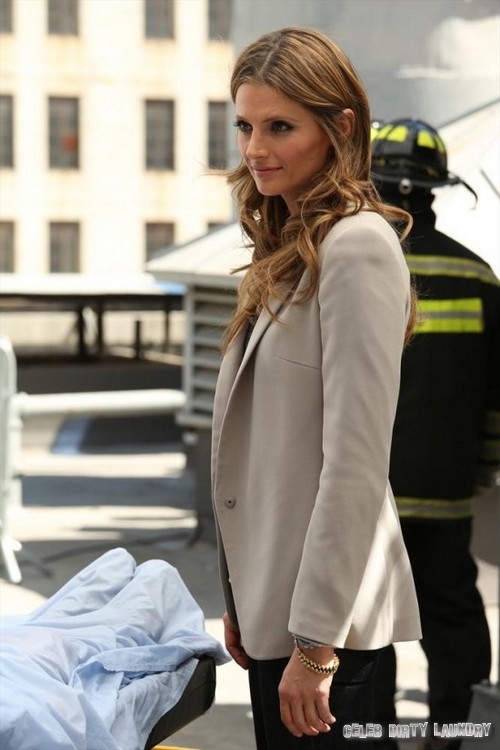 Tonight’s episode is going to be great and you won’t want to miss it. So be sure to tune in for our live coverage of ABC’s Castle tonight at 10 PM EST! While you wait for our recap, hit the comments and let us know what your think of Castle season 5, so far? Also check out a sneak peek of tonight’s episode below!

In a dungy room filled with drugs, one young woman thinks to take a shower. Only to find instead of water she’s actually bathing in blood. The water supply is checked and they find another woman floating face down.

Kate went to Washington D.C. She apparently is going through with her interview for the Attorney General. The interviewer asks her does she know why she was there and after tit for tat; Kate reveals her inner ambition to be more than NYPD.

Back in New York, Alexis confronts her dad. He was supposed to hand her professor a check for Alexis’s trip to Costa Rica. He tries to claim the trip to be too dangerous but Alexis sees through her dad. She tells him hos she still has nightmares about Paris however she’s safe now. Castle doesn’t like it but agrees to pay for the trip. He’s getting used to the idea when his cell rings with another case.

Castle arrives on the scene and asks Espositio where Kate was. Esposito doesn’t know but he remains suspicious when Kate does arrive on the scene. They’re investigating the floater. Victim’s name is Crystal Sky. A name so fake; Esposito thinks it could come from right out of Castle’s books.

Crystal was a resident at the building. Her neigbors are harbor suspicions that she was a prostitute. Suprisingly for a resident, her apartment has been wiped clean. They run her fingerprints are able to identify Crystal as actually Erica. A honor student at Harvard,

Her parents are called in. They thought she was backpacking in Europe. She’s been a good kid and had plenty of money in her bank account. Kate and Castle are stumped. Later, Castle asks Kate where she was. He was trying to call her but kept on getting voicemail. Before she could answer, Esposito brings in the elevator footage. Erica went up on the roof alone and her killer must have taken the stairs.

Ryan has Erica’s credit card information. She has ceratin charges that will help the cops retrace her steps. She had lunch at an expensive restaurant with some women

Lainey tells Kate and Castle that depite neigbors’ claim, Erica wasn’t a prostitute. But she did play a recording of sex acts to make everyone think she was. The couple decide to question one of her neigbors that was admanat she wasn’t into prostitution. The guy had a hole in his wall. He heard the sounds and yet he only ever saw Erica alone and on her laptop. The same laptop police didn’t find when they went through Erica’s place.

The lady she lunched with was a friend from Harvard. Erica asked her friend not to tell anyone she her in the city. Her friend had caught a scene between Erica and a mystery man.

The investigation reveals that Erica may have been a hacker. That why she was at the hotel. It had Wi-Fi. Why she pretended to be a hooker. No one pays attention to hookers.

Kate gets called into the Chief’s office. The chief received a call about Kate’s interview. Kate’s nervous but the Chief assures her that she gave Kate a high recommendation. The chief also knows that Kate’s name is on a very short list.

Kate needs to talk about the situation. She goes to Lainey to get her opinion. Lainey tries to her it doesn’t have to be a bad thing but Kate is still on the fence. Also she’s still lying to Castle.

The case gets an advantage. Erica was hacking into a law firm’s server. Castle and Kate go to the company and are able to get evidence and prove to the bosses that Erica has been hacking into their server for a week and a half.

They are able to track down the man Erica was seen arguing with. Too bad he was dead when they arrived on the scene. Lainey is able to the cops that it was staged to look like a suicide. He also died day earlier than Erica. Yet if he died before her then how did he send her IM about meeting up later? Two murders and one killer.

The cops find a connection to the law firm. Erica’s friend had intern there. Her friend died last summer. It was a car accident but Erica never believed her friend drove drunk. Three deaths all connected to the same law firm. Castle thinks it’s a conspiracy. Castle and Kate are able to figure out where the laptop is.

Esposito and Ryan are the ones to go searcing for the computer. In middle of their search, Esposito asks Ryan if noticed anything different about Kate. Ryan supplies she could be pregnant. Esposito doesn’t thinks that’s it but Ryan had used it to tell him his own happy news. Esposito is happy for his friend when his hand touches the laptop.

Kate and Castle are at her place when they get the news. They want to know what’s on the computer when Kate airplane ticket falls on the floor. He wants to know why she was in D.C. She finally tells him what’s been going on. She tries to explain why she hid it but he’s upset about how she handle it. He’s hurt that she didn’t include him in her decisions so he storms off.

Kate shows up to work the next high strung. Castle is nowhere to be seen. She has no time to confide in Esposito, one of the clients made a call to the law firm during Erica’s friend’s death. The friend wasn’t the one driving. She was only the passenger. The actual driver has family with political clout.

Kate can’t even do an investigation when the supposed driver’s lawyer puts an end to the topic. Kate thinks he’s the guy but there’s proof he was elsewhere.

Castle turns to his mother for advice. She tells him that he tried to do the same thing with Alexis. Holding someone back from their dream. She wants him to think his next decision carefully. Does he want more with Kate or not? Meanwhile Kate got an official offer from the feds. She in turn goes to her dad for help. He wants her to make sure to choose what she wants. She wants the job.

The suspect’s brother coincidently also was staying at the same building as Erica. He left behind a partial fingerprint at the crime scene. The brother caves.

Kate is already saying goodbye to the department in her head but she has to make it official with Castle first. Castle tells her he wants more no matter what she decides. She believes he’s breaking up with her. The season finale shocker is that he’s actually proposing.

Now we won’t know her answer until next season. Does Kate tell him YES?