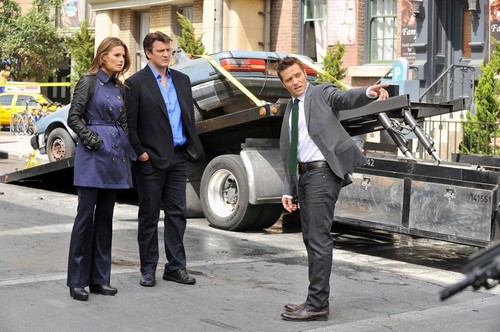 Tonight on ABC their hit crime drama CASTLE returns with a new episode called “The Human Factor.” On tonight’s episode Castle & Beckett work the murder case of a government whistle-blower killed by a military drone. Did you watch the last episode two weeks ago? We did and we recapped it here for you!

On the last episode when Beckett’s life was suddenly put in danger, the team searched for a way to save her while Castle kept her distracted by arguing with her about who fell for whom first.

On tonight’s show when Homeland Security inexplicably seals the crime scene of a car bombing, Castle and Beckett find themselves with two mysteries on their hands: who murdered the victim, a government whistle-blower, and why are federal agents trying to take over the case? The plot thickens when they discover that the victim wasn’t killed by a car bomb but by a missile from a military drone.

Tonight’s episode is going to be great and you won’t want to miss it. So be sure to tune in for our live coverage of ABC’s Castle tonight at 10 PM EST! While you wait for our recap, hit the comments and let us know what your think of Castle season 5, so far? Also check out a sneak peek of tonight’s episode below!

A seemingly friendly man is walking the streets of New York when he spots a suspicious black car. He picks up his pace until he manages to enter his own vehicle. Believing himself now safe he breathes a sigh of relief. Too bad his car blows up seconds later.

Castle is at his apartment playing with his toy car. He’s joking around with Kate when the police department calls them.

At the scene of the crime, Kate finds out the feds, Homeland Security, have taken over the case. Already suspicious Ryan tells him that the victim was being watched by literally two men in black. But not even agent Jay and Kay are talking. They don’t have the body or the murder weapon however Kate and the guys refuse to give up on this case. They do manage to find out the victim’s name. Dale Tanner. Now all they need to find out is whose the mystery man that watching their progress.

Dale started a website called “Whistleblower Anonymous”. It was a way for him to pin point crime and serve justice. Something that brought in direct aim of Homeland Security when he refused to give up a source. Even his son is suspicious of Castle and Kate.

Dale took down at least 30 companies within the last year with truthful evidence. Although his evidence on his site before it was taken offline. One of the companies had a worker that was conveniently seen in the garage where Dale’s car was located. Ryan and Esposito question the woman only to find out the lady manipulated Dale into a relationship just so she could find out his source. There’s just one little problem. Dale’s wife found out about the couple and threatened to kill her husband.

Kate brings in the wife. But before she could really dig into the wife’s story; Ryan calls her out to watch the reconstruction of the car bomb. Apparently the simulations shows the bomb or better yet a missile was used. He was taken out by a drone.

Esposito doesn’t believe it was a drone but Kate tells him that there is a testing site not far stationed. Later Kate is questioning the G-Men over the incident. They’re stonewalled by the word “classified” until the military abruptly calls a end to the questions. Katee and Castle are leaving when Kate notices the mystery man from earlier at the site.

Even though Castle and Kate got nothing, the G-Men did. They agree to the questions only to find out what the NYPD knows. After doing so they then confiscated all the evidence of a drone. The only possible lead they have now is Dale’s son Sean. The company spy fingers him in helping with his dad. The boy also is the only one who knows his dad’s partner.
Ryan tries to get Sean to open up on what he knew. Sean finally reveals the partner and gives the guys a phone number to Omar. Kate shows up to the meeting to speak the nervous and weary Omar. The guy admits he wasn’t a partner but instead was an assistant. Following them is the mystery man. Kate catches him but Omar takes the opportunity to run off.

He doesn’t have any more information that the cops do. Things are looking blank when the agent reports to them that it actually was their drone. Someone hacked into a drone to kill Dale.

The agent is able to pinpoint the hacker’s location to lower New York. He’s off to investigate but his inclusion deal with the cops is over. The cops are back on their own. The hacker is an anti-drone fanatic. He believes that drones will one day use drone against American citizens. The cops believe he tried to frame the government to prove his point.

Castle is at his apartment when Kate plays a nasty trick on him. She turns on his electronic toys in order for him to think it was rise of the machines.

After taking a trip, Kate and Castle are able to trace their book lead to where the Hacker is. They find a gated property but don’t have a warrant. Castle simply walks in. After all, the gate was open. They’re walking to the house when suddenly they’re attacked by a drone. They shoot it down only to find out the drone was shooting blanks. The creator comes out to confront them. He’s mad they shot down his test drone.

The creator was a part of the drone program. He doesn’t believe in unmanned drones. They can make mistakes. That’s why he created a drone hacking software. If the government knew the software existed then they would have to dismantle their current drones. The hacker gave the software to Dale to publish. It was this software that ended up killing Dale refused to report the hacker information because he didn’t want any idiot with a computer to use it. So it had to be someone close to Dale because it wasn’t the hacker.

They now believe Omar, the assistant, probably killed his boss in order to sell the Hacker program. With the special agent’s help they’re able to track down Omar. Too bad he already left the country or so they thought. The special agent had the flight turned around. Now it’s up to Kate to break him.

Omar denies any part in his boss’s death. He tells her that he returned the flash drive to its owner and that’s all he did. Yet there was another person who knew about the hacking program. His son, Sean.

Sean was pushed over the edge by the affair. Growing up it was always difficult having his dad do what he did. Sean was upset that in the end despite his mother taking care of them, his dad still broke his mom’s heart.

Back at the squad, the special agent congratulates the team for a job well done before asking for a quiet moment with Kate. The agent wants to recruit Kate. She can promise she’ll think about it.

Kate doesn’t mention anything to Castle about the offer.

The Season Finale is next week. What surprise do they have up their sleeve. The promo is only willing to give Kate admitting she wants the job. Will Castle and Kat be over?