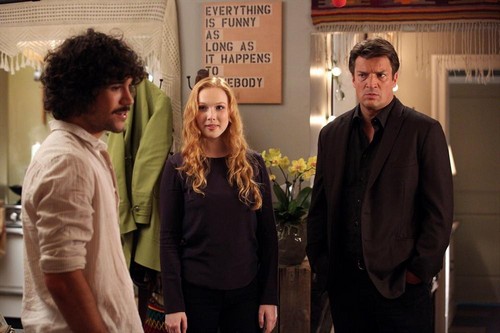 Tonight on ABC their hit crime drama CASTLE returns with a new episode called “Time Will Tell.”  On tonight’s show Castle is certain a women’s ritualistic murder is tied to a “Da Vinci Code” type consipiracy.  Did you watch the last week’s season 6 episode 5? We did and if you want to get caught up, we have a full and detailed recap, right here for you.

On last week’s show a grisly murder investigation led Castle and Beckett to a suspect (Joshua Gomez, “Chuck,” guest starred as Simon Doyle) who claimed he’s traveled back in time to stop terrible events from unfolding, events that woulr change the course of human history. Was he simply a deluded killer, or was it possible that he was telling the truth?

Castle and Beckett investigate the bizarre murder of a young woman who was found ritually posed. When the team finds a collection of strange symbols in her apartment and the prime suspect turns out to be a mysterious monk, Castle becomes convinced they’ve stumbled onto a “Da Vinci Code” style conspiracy. Meanwhile, Castle tries to come to grips with the fact that Alexis and Pi have moved in together.

Castle and his mother want to be excited for Alexis’s new place but besides the boyfriend named Pie, her new apartment looks derelict. As Martha is able to come up at least few compliments , all Castle could see the horrible furniture created from other people’s junk. He lets his displeasure be known and Alexis spots it immediately.

Castle said he needed a new murder in order to stop obsessing and the NYPD delivered. He and Kate have a new case. An accountant that apparently was killed with a dagger. The victim’s name is Susannah and she recently took time off of work for personal matters. Yet no one knows what this business was. When he saw the seen Castle came up with a far fetch idea like he normally does but this time he could be right. They found evidence Susannah was into an occult. She has research of it all over her place.

Her cousin doesn’t believe she was into that scene seriously. All he knows what that Susannah wanted to speak with him but never got the chance. However do they explain the last footage of their victim alive she was being followed by a monk. This surely can’t be the Da Vinci Code coming to life? Castle believes so. Kat not so much. However Esposito says Castle oddly enough may be onto something.

Lanie did find out after further investigation the victim was killed with a sword. Things getting stranger when they run into a professor Susannah was using for help with her research. The whole case could be more than an occult. It also involved a treasure hunt. A very cursed treasure hunt.

The police did get some information on the monk. He was a former monk that just was released from prison. They find him in a crack house and the moment they begin questioning they learn some things. The monk was hired to protect Susannah. He was supposed to stop at spiritually but he physically involved himself when he noticed a guy was bothering her.

Neither Kate nor castle buys the story but Kate is willing to be wrong. She sends in a sketch artist to Wade. She wants to see who claimed to witness. In the meantime they investigate the monk’s church. It’s there that they realize they also found the first location in Susannah’s treasure map. Following the second although leads to trouble. A man wielding a saber caught Castle by surprise. Too bad Castle has been practicing sword play. He did it for fun but now it’s actually paying off.

Castle defeats him but much to his disappointment he learns everything was fundraising game. None of it was real. It was set up to bring awareness to the fact a lot of historical building were being torn down. So there’s no way the “hunt” could have led to Susannah’s death. Castle is heartbroken and leaves Kate to continue on alone.

He ended up going home to face a scolding form his mother. She was upset how he acted at Alexis’ apartment. But she did give him an idea for the case. He brings the new discovery. The treasure hunt was based off some old letters that might have turned out to be a real hunt. One that lead back to the church. The police realized she double back to the church only after pretending to leave.

At the church, Castle and Kate figure out the last piece if the clue. They entered a secret vault which is also the crime scene. Susannah’s blood could be found inside. Along with the first ever mint coins created by the US. There’s over a thousand there and they’re worth about a million each. Sadly, when Castle picked up the whole jar a safety measure kicked in. They got locked inside of the vault. Thank God for cell phones. Kate was able to call for help.

The man that set the whole scavenger hunt knew the hunt was real. He couldn’t figure it out on his own and that’s why he sent so many other people out on the search. He had Susannah on the case because she was descendant of the man that created the map. The whole treasure was part of the family’s lore. Something her own cousin would surely know.

He didn’t killer to get the coins. She was going to donate them to a museum while he was struggling to pay for assisted living for his mother. He never meant to kill her. Susannah got her in death. The coins were donated by the church to a museum.

After such an adventure, Castle went to make peace with Alexis and he couldn’t. She wanted to be accepted and was hurt that her dad didn’t give it.