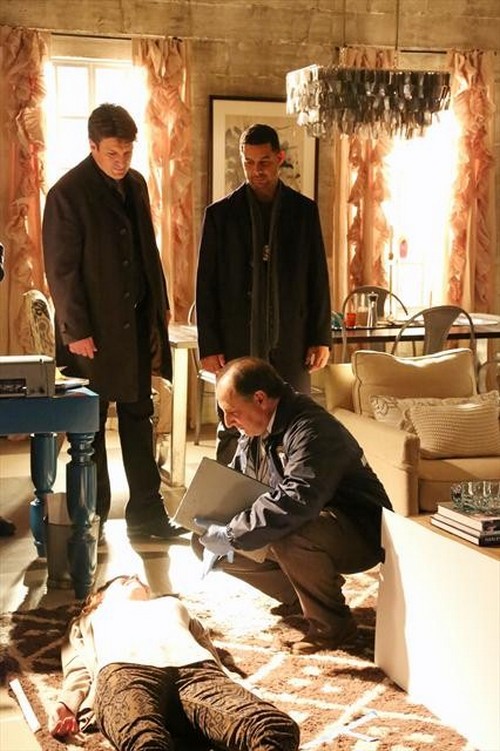 Tonight on ABC their hit crime drama CASTLE returns with a new episode called “Scared to Death.” On tonight’s show Castle becomes convinced that he too is marked for death when he accidentally watches the cursed video. Did you watch the last episode? We did and we recapped it here for you!

On the last episode in the powerful conclusion of a two-episode story arc, when the FBI failed to get his daughter back, Castle took matters into his own hands, reaching out to a shadowy fixer to help him recover Alexis. But Castle soon learned that his daughter’s kidnapping might be part of an even more sinister agenda.

On tonight’s show when a young woman appears to have literally been scared to death three days after watching a “haunted” DVD, Castle and Beckett delve into one of their creepiest cases yet. To make matters worse, Castle becomes convinced that he too is marked for death when he accidentally watches the cursed video. Master of horror Wes Craven makes a special quest appearance

RECAP: A girl Is on the phone with 911, the lights went out and she is afraid, she says that she is going to die and it’s coming for her.

Castle and Becket are on the scene, the girl is dead and she looks like she was scared to death.  The victim’s name is Val, her friend Amanda just arrived at her apartment and she tells Castle that her ex-boyfriend Freddy would have been someone that would have wanted to hurt her. Val filed a restraining order against her ex, he claims he went over to her apartment, but only because she begged him. Freddy says that Val said that he sent her a package and when he said that he didn’t she freaked out, she also asked Freddy if he believed in the power of evil.

The package Val received was a CD or a disk. Castle finds some weird DVD that says you will die on the third day, she died because she got that disc.

Becket wants to watch the DVD, Castle is against it but he sits down and watches it with her.  Becket thinks the images are creepy, but she is sure they mean something. Castle is convinced that the DVD resurrects something from beyond, something dangerous.

Castle and Becket head to the morgue to find out the results of the autopsy. It appears that Val died of heart failure. The cause of death is unknown.

Val had a mail box, it belonged to a guy who died months ago. Esposito tracks down who the package came from that was sent to Val, but it`s too late, when they get to his apartment, he is dead. This guy also got a package with a disc in it, Castle is counting down, he`s convinced he is going to die in 48 hours.

Becket is convinced that there has to be more of a connection between the two victims, she puts Esposito and Ryan on it.

Becket wants to go home and have sex with Castle but he wants none of it, he says that it is what usually happens before people are killed, they have sex the night before. Becket can’t believe how far Castle is taking this.

Castle calls a friend, Wes, to find out what to do with the spirits.

The next day, Esposito and Ryan tell Becket that there is no connection between the two victims, they are at a dead end. Castle took it upon himself to dissect the images on the DVD and he has found a connection, there is a photo of an The Brunswick Inn and both victims have previously stayed there.

Esposito and Becket head to the Inn and they find the Inn Keeper who tells them that the room numbers they stayed at end in number 13 and they are connected to a trial of a serial killer, Nigel Maloy. But, he couldn’t have killed the victims because he died three years ago in prison.

Castle has a tape of an interview of Nigel Maloy, he says that even when he is gone he will continue killing, death is just the beginning. Ryan remembers that Nigel has a brother, Leopold, who was found not guilty because of reason of insanity. The weird thing here is that Val visited the mental institution where Nigel’s brother resides. Castle and Becket head right over to the institution and Becket asks him what happened when he met with Val. Leopold says that he is not his brother’s keeper and did not do anything. Leopold asks Becket why would he be a party to a murder when he is going to be facing he parole board soon. Leopold continues to talk and says a little too much about other witnesses, Becket knows that he has been talking to someone about those murders.

There has been a development, Nigel Maloy’s body has vanished from his grave, Castle is convinced that he has risen from the grave. It turns out that Leopold had no contact with anyone, he couldn’t have been responsible. Esposito has found another witness, Mark Heller and he received a disc as well, he will most likely be the next victim.

Becket and Castle are on their way up to a cabin in the woods to find the other witness when Becket is on the phone with Esposito and she loses the connection. They find there guy and he is drinking, Becket tells him she wants to take him to the station to protect him but he doesn’t want to go. All of a sudden, the power goes out and we see someone running outside the cabin – do corpses run?

Becket runs outside after whomever is out there and Mark tells Castle that they all have blood on their hands and feel guilty for what happened. Becket tackles the person down, it is Leopold’s nurse – she is there for Leopold, to protect the victims from getting killed, he wants to get parole and she loves him.

This is about a guy named David Collier and his daughter Amanda, her father was wrongly id’d for being a serial killer and she lost her mind and went to get revenge on the people she thought responsible for her father’s death. She tries to attack Mark, but Castle hits her on the head with a bottle of holy water and knocks her out.

It appears that Nigel’s body never disappeared, at least recently, the morgue lost his body and never buried it.