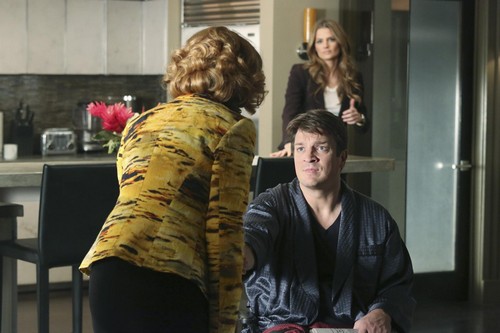 Tonight on ABC their hit crime drama CASTLE returns with a new episode called “The Lives of Others.” On tonight’s show the 100th episode, Castle, stuck at home with a broken leg, finds himself suddenly thrown into a “Rear Window”-esque murder mystery. Did you watch the last episode? We did and we recapped it here for you!

On the last episode when a man was found dead in an industrial cake mixer, Castle and Beckett traced the murder to an Irish gang in Staten Island and a beautiful bar owner named Siobhan O’Doul. Much to everyone’s surprise, Detective Ryan had a complicated history with Siobhan and the Staten Island crime family from his days working undercover in narcotics. When the case hit a dead end, Ryan had to go back undercover to expose the killer, complicating his relationship with his wife.

On tonight’s show iIn the show’s 100th episode, Castle finds himself in the unfortunate position of NOT being able to work a case. While he’s holed up in the loft with a broken leg, Beckett goes off to investigate the death of an IRS agent without him, leaving Castle miserable and bored.  But when he thinks he witnesses the murder of a young woman in the apartment across the street, he is thrown into a “Rear Window”-esque murder mystery that hits much too close to home. 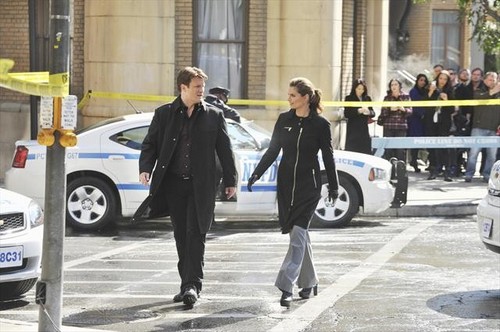 RECAP: Castle hurt his leg skiing, Becket is on the scene of the latest crime, a girl has multiple contusions to her  head, she was beat with a stick. The victim’s name is Claire, she is an IRS agent and after looking at some footage of the attack, Becket figures out that it is premeditated.

Becket interviews the victims’ husband, he tells her that she was a tax evader and made everyone she audited angry. He goes on to say that they were at dinner lately and some guy came up to them and said that she ruined his life, she promised to file a complaint.

Castle is at home, playing with a toy helicopter to keep himself busy.

Esposito heads over to Claire’s office, he is told that she was a rare breed, she loved her job. Meanwhile, Castle is at home and has a paid of binoculars, he is peeping on other people in their apartments and spies on a woman who is having an affair when another guy walks in.

At the station, Castle calls Becket and complains that she hasn’t brought home dinner yet. Castle is still peeping on the couple when he sees that the guy is angry and picks up a knife, Castle can’t see anything else, but he thinks the guy murdered the woman. He calls Becket and she has Esposito check it out, but it turns out to be nothing. Esposito says that when he went over there the guy was calm and said he and his girlfriend had a fight and she went home.

The next day, Becket is back at the station, Ryan found a guy who tried to muscle through security to get to Claire, his name is Dan and he is a hot head and because of Claire’s audit, he is facing criminal charges.

Castle is back with his binoculars and sees the guy with a tarp, then he sees him washing blood of his hands.

Becket has Dan in the station, he claims that Claire went to see him and asked him to help her disappear. Castle calls Becket in a panic, she goes home and tells Castle that she knows he is lonely but he doesn’t have to make up stories to get her there. Castle is shocked that Becket doesn’t believe him. At the station, Becket tells Esposito that Castle wants them to get a warrant to search the apartment he has been peeping into, he is taking this really serious. It’s 3am and Castle sees the guy removing the body, he tries to record it but misses.

Castle is with his daughter and she starts looking through the binoculars to see the guy taking off his clothes, then he puts on a gas mask and rubber gloves.

Esposito says they found something on Claire, she had a ton of money in her bank from a crime boss.

Castle is still peeping, his guy is now walking with bags and he has his girlfriends purse. Castle knows he needs proof, something solid, he is going to break into the guy’s apartment and he wants Alexis to watch out to make sure the guy doesn’t return to the apartment.

Becket brings the crime boss into the station and he admits that he gave Claire a half million dollars for doing her taxes, he says she was afraid of her husband and that is why she was hiding the money. This all makes sense, the husband took a million dollar insurance policy out on Claire recently.

Castle is in the apartment, Alexis is keeping an eye out at to make sure the guy doesn’t return. Trouble, Castle has fallen down and the guy has just returned to his apartment. The guy gets a phone call, then walks in his bedroom, luckily Castle is on the floor and he doesn’t see him. Castle overhears the conversation, the guy is going to Jimmy’s boat. Castle makes it out of the apartment.

Becket interviews the husband, she asks him why his wife was terrified of him and why he got a million dollar policy three months ago on his wife. Becket gets a phone call from Castle and he tells her what he did. Castle has a receipt for a storage locker, he is convinced that the body is being stored there until he takes it to Jimmy’s boat. The guy the woman was having the affair with has arrived at the apartment and the other guy pushes him out. Becket sees it and goes down to talk to the guy before he leaves. It turns out that the guy has been texting Emily, the woman for days and there has been no reply. Castle is convinced the body is in the storage locker. Castle convinces Becket to go with him to the storage locker and he break in, the rug is there. Becket unrolls the carpet, there is nothing there. There are bags, they look inside and find a wig and clothes, then a security guard arrives and pulls his gun on the two.

Castle and Becket are in trouble, the girl is fine and his neighbor said that if he bothers him again he will press charges. Ryan tells Becket that Claire’s husband was acting really strange the night of Claire’s murder.

At home, Castle apologizes to Becket and when he turns around she is all dressed up to go out to dinner. Becket offers Castle a drink and he all of sudden realizes that he saw the guy in the other apartment take a drink from the cupboard, not the fridge. Castle is convinced Emily is in the fridge. Becket is furious, she wanted to go out to dinner, she storms over to the guys’ apartment, she is going to prove to Castle that he is wrong. Castle watches through binoculars, Becket gets let in the apartment by the guy but when she goes near the fridge he freaks out and grabs her. Becket grabs something for a weapon and the lights go out, Castle can’t believe it.

Castle calls 911, Esposito and Ryan are there and they break into the guys’ apartment. Surprise, it is a party for Castle, Becket set the whole thing up.  Castle says it is by far the greatest birthday gift of his life.

Becket is back at the station, she decides to question the security guard again and tells her that she was looking in the wrong place on the surveillance tape. Becket figures out that the tape was doctored, it is fake footage. The girl says that she didn’t kill the woman, it turns out that Claire’s husband was the killer, after dinner one night he bludgeoned her to death.

At home, Castle and Becket share a glass of wine and toast to a hundred more cases solved, then Castle thanks Becket for the epic birthday present. Castle says that he is going to top it when it is her birthday.