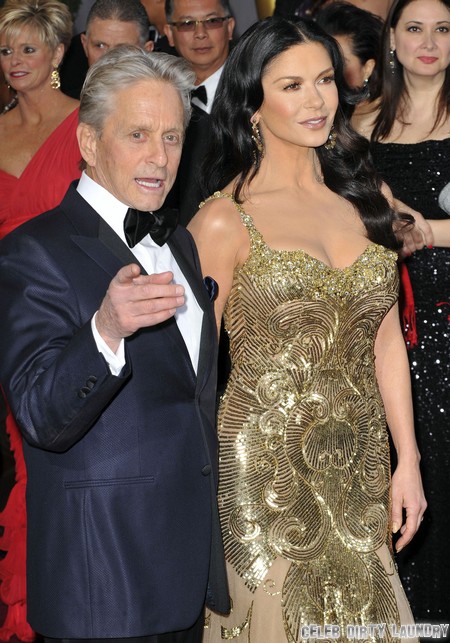 Catherine Zeta-Jones and Michael Douglas were the proverbial odd couple. They lived a glamorous life as two of Hollywood’s darlings, but unfortunately, as relationships sometimes tend to go, the two “secretly split last summer” – this according to an exclusive National Enquirer report.

Who is to blame for this Hollywood power split? Did Douglas’ cancer battle and Zeta-Jones’ bipolar type 2 disorder become the final catalysts in this epic love story? According to the Enquirer report, Douglas moved out of their country home last summer due to “medical issues” and his son’s incarceration. The exclusive source reveals, “Between Michael’s medical issues, Catherine’s mental health and Cameron’s legal troubles, they apparently couldn’t always live together. Michael moved into a rental house for a short period. But their problems could have led to a permanent split and even a divorce.”

The story’s tragic turn took place in August of 2010, when Douglas was diagnosed with Stage 4 throat cancer and had to undergo intensive chemotherapy and radiation. In January of 2011, Douglas announced that he was cancer-free, and while this should have been a very happy time for the family, Zeta-Jones was unfortunately admitted to Silver Hospital in New Canaan, Connecticut due to the extreme stress placed on her and her disorder. Although bipolar disorder patients are on a strict regimen of medication to control the manias and the depressions, severe stress can still trigger either of these episodes. Bipolar type two is characterized by hypo-manias – a milder form of mania – and deep depressions, while bipolar type one is characterized by severe manias and severe depressions.

According to the source, this tumultuous illness was one of the defining factors as to why their marriage crumbled. The source alleges, “Catherine took drugs to help treat her bipolar condition, and although the medication may have helped her, they also may have played a role in the couple’s problems.” Other factors, including Douglas’ son’s incarceration for drug possession, also played a defining role in the split. Cameron, Douglas’ 34-year-old son, who is serving a five-year prison sentence on drug charges, was sentenced to another four and a half years for drug possession while incarcerated.

Charlotte Church, a UK-based pop opera singer, recently explained to a UK talk-show that during a celebrity golf tournament Douglas and Zeta-Jones attended, he was in a foul mood and became furious throughout the day. “We were singing and having a great time, and Michael was really pissed off,” Church alleged. This was an indication of things to come.

Zeta-Jones tried to save the marriage by bringing the family together, because she “still loved Michael”, but a few months later, when Zeta-Jones was asked to attend her father-in-law Kirk Douglas’ Spartacus re-screening, and she was nowhere to be seen, the writing was already on the proverbial wall. “Catherine was scheduled to at­tend the screening, and everyone was asking where she was. Michael made some lame excuse, but when she skipped the fam­ily dinner it was obvious that something was not right. When a close pal asked Michael about it, he said, ‘You know Catherine. She’s go­ing through one of her phases again.’ I think he felt com­pletely betrayed that Catherine didn’t show up. But maybe she was upset with him and wanted to make a point by snubbing him on this special family evening. It must have been like a slap in the face to Michael,” an exclusive source alleges.

It’s a sad conclusion to one of Hollywood’s most powerful couples. Although Douglas and Zeta-Jones’ careers stalled in recent years, they still had enough clout in Hollywood to be recognized as a “power couple”. Presently, after their split, things are looking a bit glum for the two former lovers.

What do you think? What was the reason for the split? Let us know your thoughts in the comments below.