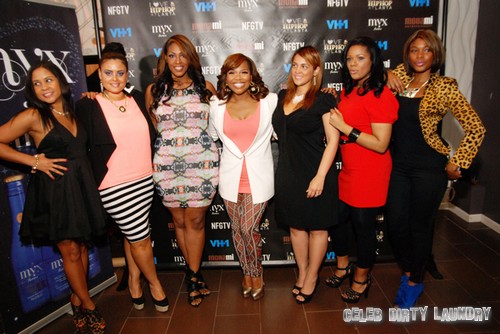 Last night, the press run for Season 2 of VH1’s “Love & Hip Hop Atlanta” made its way to New York and Celeb Dirty Laundry was thrilled to be there.  If your fans of the show then you already know that there would be drama. Hosted by Myx Fusions, one of the newest ventures for the MC, the event kicked off with many bottles of the Myx Moscato drinks. But whether buzz or steady neither could have stopped the shock or even numb the experience of season two viewing.

With many ups and downs on this upcoming season, the first episode provided the audience with both surprising gasps and the general common boos for Stevie J. We got to see that instead of any chance of resolution, there will be even more drama than first season. However there was to be one remaining bright light in the premiere. K. Michelle got signed on to a byproduct of Warner Bros. It’s been a long road for her but if she keeps doing want she should be doing she’ll be fine. As long as she doesn’t fall back into “crazy” stereotype.

After the screening, everyone was getting prepared for the “Q&A” with the cast, five of whom attended. Mimi, Erica, K. Michelle, Stevie, and Joseline. In case you were wondering who exactly Stevie arrived with, it was Joseline. Although he didn’t leave with her. Unexpectedly Joseline left during screening and, no, there wasn’t a scene. But that didn’t stop the host and last night’s MC, Mona Scott-Young, from commenting on her and jokily implying that Stevie must have done something again. And Here I was thinking that the girl just found out she was wearing the same shade of red that Erica had on.

Stevie and Joseline seated themselves to the side while in a perfect L shape path away, you could find the rest of the girls. Everyone kept to their sides until entering the stage. Mimi, K, and Erica all appeared to have lost some weight. Don’t know what their excerise plan was but Erica’s weight loss was her ring. Despite many questions thrown out to gauge out the truth, Erica told the press that they’re just going to have to wait to find out along with the fans.

Come on, Erica, we can do the math. No Scrappy plus no ring means there’s a high chance that Momma Dee defeated you. Still, like Stevie has been joking throughout all the recent press events, “there’s room” on his bus. Would have love to hear Joseline reaction to that suggestion but Mimi cursing out her baby daddy was just as entertaining.

This new season may just usurp the last one’s highest record. There’s just one little problem. As I wrote earlier, K, is still trying to disprove the crazy rumors from earlier in her career. So tell me why she went off on the guy sent from Bossip. You see, in her own expressive way, she raged a war against bloggers last night. It may have started with one guy but as the night progress, she did insult us all.

I like K. I want to see her succeed. Then she pulls stunts like this and I have to write about it. Why? Because you shouldn’t disregard and insult the community that will write daily about you. Quick and furious texting could be heard immediately after her comments.

I can understand some of the women’s frustrations with the media. They don’t want to be categorized as one type of person but it’s called personal responsibility. You could be mad when writers bring your kids into it. That’s reasonably justified. Yet they can’t get mad that their reality is drawing comments.

Overall the night was both interesting and fun, especially if you tried the new Coconut & Moscato. Everyone is expanding their brand even Erica. Also after the initial outburst from Mimi to Stevie, everyone looks like they’re getting along. The promos had shown some tension between Mimi and K. Be assured that the two ladies did embrace; even if it was after some prodding from the audience. I think it’s safe to say is that one of the most eye catching moments for press was when Mimi and Stevie not only embrace but also posed together. Despite what happened last season or the first episode in this one, that door never looks like it’s fully closed with these two.

I could see both why Joseline left early and also that this season has got a lot more fist fights. Interested…if you want to see what set the event buzzing, tune in this Monday on VH1. Whatever you do don’t miss the first 5 minutes.