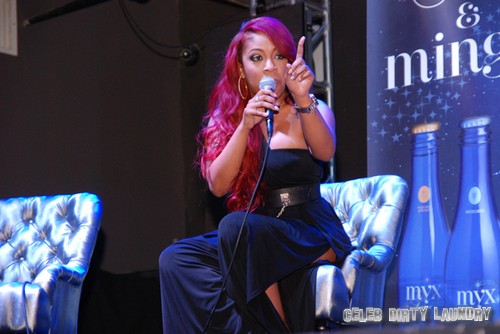 Last night I was unfortunate enough to be a witness to the verbal assault of a Bossip intern. He was both ridiculed and cursed at by K. Michelle at her screening event for the upcoming Season 2 of “Love & Hip Hop: Atlanta”.

During the scheduled Q&A, our fellow man in arms merely asked Mimi a question on her being a role model. The question was simple and routine. If anyone should be showing and/or taking any offence; it should have at least been the person the actual question was directed to. And Mimi did get offensive.

She was replying to the reporter that she doesn’t live her life with other people in mind. Her life is her truth. She had received the question because of her on screen behavior with her on and off again boyfriend, Stevie J. On Season 1 these two created a huge and unsavory media storm because of his cheating and hers always taking him back.

Let me stress that were many reports on how badly she was representing the black female community. So that when all of us saw the premiere episode with her cozying up with Stevie, it was natural to ask her about being a role model for young women. Especially those who tune into every episode just to see her again conflicted by a man that wants to live in a bigamous relationship.

It starts off with K. Michelle telling the poor guy that they are all allowed to live their lives but the real moment of clarity (especially for the fellow reporters) came when she then went on talk about what Bossip had done to her. That’s when she really lost all sense of control and maturity.

Apparently Bossip had published an article about her that wasn’t all sunshine and roses. Was this the reporter the one that wrote the article? I don’t know and I’ll bet you neither did she.

At first she attacked the article about herself and how it was unfactual and mean but what she did afterwrds could never be justified. She attacked the man personally. Using the microphone as a weapon she made fun of his afro and implied he should go back to Africa. Although it was technically a black on black crime, I can still say she was racist and I can call her delusional and a bitch.

After her scathing character annihilation she later went on again with a mini tirade. Even a Radio DJ had come up to podium to chastise her a little. He told her “why did she have to be so hard on the guy, he was just doing his job”. Was she repentant? NO!

She continued to mock the reporter and all of the blogsphere by saying that we all weren’t even real journalists. Did she not remember that most of the room were filled with reporters? Maybe she just needs a dose of reality. She wants to be a big time singer. Then she’s going have to pay the dues like everybody else. Tom Cruise is called crazy. Hugh Jackman is called gay. Are either of these true, who knows? But do you see them ranting at a reporter that asks for a confirmation? No.

In other words, K, you’re not even on their level. Do not bite the hand that has/is/will feed you. Especially now that your’re leaving the show that made you popular. All of your new offers, including the new deal with Atlantic, can go away if word circulates that you’re a crazy unreliable bitch. Give them time… I’m pretty sure Bossip can line up an interview with everyone that you’ve ever had a problem with. This is your new reality, welcome to fame!