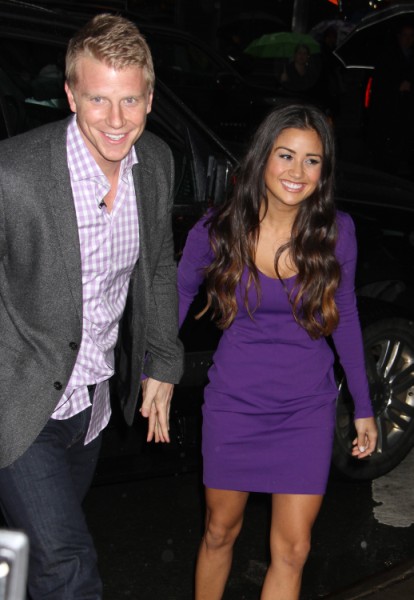 Filming ended and the last rose was given out last Thanksgiving but The Bachelor Sean Lowe and his fiance, Catherine Giudice finally got a chance to sit down and speak exclusively with Celeb Dirty Laundry about what it was like finding love on reality TV.

The wholesome insurance salesman from Dallas stole America’s hearts and single-handedly brought the sexy and the ratings back to The Bachelor on his quest to find true love with the brunette beauty but his journey into reality TV isn’t over just yet. The couple has already announced plans for a televised wedding event (although a date is still up in the air) and Sean shocked just about no one when he announced he’ll be starring on the latest season of Dancing With The Stars. Sean Lowe assured us he’s not biting off more than he can chew. It does seem like a lot for a new couple that continues to argue they are looking forward to the slower, more relaxed Texas pace where they can find their rhythm. Could reality television be the future for Sean and Catherine and are they worried about the not-so-great odds that plague reality TV romances?

Check out the highlights of the interview below!

On loving Lindsay Yenter but being in love with Catherine: “I think my issue going into that last week was separating my feelings of being in love with Catherine and my feelings of loving Lindsay. I loved the person that she was and that took a while to kind of separate and straighten out in my head and luckily there at the end I did receive the clarity that I had been looking for and I just knew – you know, Catherine, I’m in love with her and I can’t wait to spend the rest of my life with her and I didn’t share those same feelings with Lindsay although I truly loved the great person that she is.”

On having a televised wedding: “We thought it was only fitting. Our relationship started and it was formed on TV and the world has had the chance to watch it be cultivated on TV. We think it would be a special thing to have it televised and everyone associated with the show we’ve grown very close to and, you know, they would obviously produce the wedding as well. So I think it would be fun and it would be nice and it would be really cool to enjoy that experience with all of our friends and family.”

On Dancing With The Stars: “I don’t want the fame itself, but when an opportunity like Dancing with the Stars comes along, it’s too good to pass up. It’s going to be an incredibly unique challenge. It’s a once in a lifetime opportunity. And I wouldn’t have taken it had Catherine not been OK with it. And she was the first person I called. She is fully supporting me. She’s in my corner. She’s going to be along in this crazy ride with me.”

On a reality TV career: “Opportunities may pop up that are just great and we might feel that they’re great for us as a couple. But I’m not holding my breath on that. I think after Dancing with the Stars, there’s a good chance we’ll head to Dallas or go somewhere and resume a normal life.”

On The Bachelor conflicting with his religion: “When I first started The Bachelor sometimes, you know, whether it was kissing multiple people or whatever the case was, it did feel a bit unnatural. But I mean that’s The Bachelor, you are developing multiple relationships simultaneously and only on The Bachelor are you going to start to develop feelings for multiple girls at the same time. And you know, kissing is just a part of showing affection and it’s romantic. And, you know, I don’t regret that and I certainly don’t think that – you know, I don’t think anyone else has really had a problem with it either. I feel supported by a lot of people, a lot of people that share the same faith as me and I think I handled myself well.”

On the popularity resurgence of The Bachelor: “I went into the season with one goal in mind and that was to be myself and to keep an open mind and an open heart throughout the entire ride. And, you know, the viewers have responded well and if it’s my wholesome nature, my family values, then, I think that’s a great thing. I think there needs to be more of that on television and I have heard from a lot of people that, you know, ‘We haven’t watched the show in years, but you’ve brought us back’. And, you know, ‘I feel comfortable letting my daughter watch the show’. So I love hearing things like that. And, you know, hopefully that trend continues.”

Catherine on Sean’s family: “You know, I – I just saw a glimpse of – of his family and the love and fun that they shared during Emily’s season. And when I met them in person, it was – it was even better. I mean, I had an instant connection with all of them. And it – it makes me so excited to get to know them further and know that they’re completely supportive of our relationship and so many memories are to come.”

Runner up Lindsay Yenter was also good enough to take some questions following her televised broken heart. She played coy but did say she’s moved on from Sean and is seeing another guy although she isn’t ready to name him just yet. She also set the record straight on the fact that she was not approached to be the next Bachelorette but is excited to get back to her career as a teacher. She sounds super happy and content despite the outcome and we appreciate her taking the time to talk to us!

On losing to Catherine: “Every girl doesn’t want to get their heart broken. So when I realized that I wasn’t going to be Sean’s pick, it was hard. I wanted to make sure that I got the closure that I needed to get. But you know, you – it was a really tough situation. It was really hard, but I had to make the best of it and you know, stay strong, and confident through. But there’s like a point where you wonder what went wrong, what happened. So it was hard. It was really hard. It was – it was a very I love you, but I’m-not-in-love-with-you moment. So it was nice to see that he truly did love me and (loves) the other person and that’s great. It’s heartbreaking when somebody that you’re in love with isn’t in love with you.”

On getting over Sean: “So my family was there for me and they are very supportive and I kind of hid out and was very, for about a month and, you know, just kind of – you know, recouped and, you know, got everything together and then eventually moving out back to Orange County, that was a great thing, you know, get back to the routine and find a great job. So I think that just going back to normalcy really helped me with the heartbreak.”

Are you excited for the Sean Lowe/Catherine Giudice wedding? How do you think Sean will do on Dancing With The Stars? He says he has no dancing experience but he is athletic so I wouldn’t count him out. We all know how Emmitt Smith did! Also, do you believe Sean when he says he’s excited for the simple life after DWTS? Sometimes they get hit with that celebrity bug. Will this be the last we see of him?