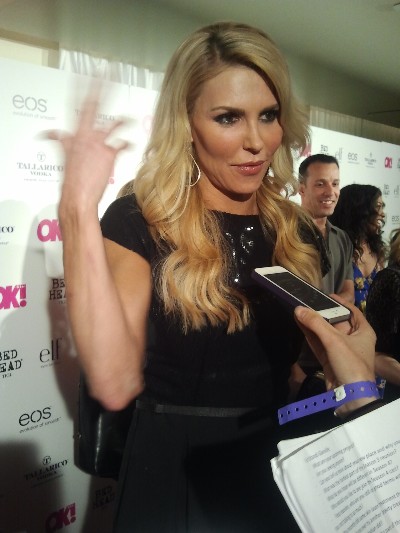 OK! magazine threw its annual “So Sexy” event last night in Los Angeles at Skybar in the Mondrian Los Angeles. Hosted by Real Housewives of Beverly Hills star, Brandi Glanville, the party highlighted Hollywood’s sexiest and most glamorous celebrities. Celeb Dirty Laundry had the awesome pleasure to be front and center as the stars of such hit shows like Dancing With the Stars and Vanderpump Rules stopped by to chat it up before making their way to the Skybar.

First let’s talk Brandi. I was totally taken aback by how nice this chick is – no diva antics whatsoever. They aren’t all like this and she didn’t have to be but she blew me away by how sweet and fun she was towards each and every person that asked for an interview.

She filled me in on the details of her book, Drinking and Tweeting, and confirmed the rights were bought to make it into a movie in the future. Brandi also coyly affirmed that she was dating someone special but wasn’t ready to give his name. She also wasn’t ready to divulge major news but said she’d be ready to announce something big in three days. One thing she did want to get across is how excited she was to be teaming up with OK! for the party.

“I was really honored. As a single mother at 40 I do try to be sexy. I like to be pretty so when they asked I knew it was an honor,” she gushed.

Brandi was surrounded by fellow Bravo alums and friends including cast members from the new spin off Vanderpump Rules and  fellow Housewives regulars Marisa Zanuck and Jennifer Gimenez who were eager to show their support for their friend.

“She and I really hit it off the first time we met,” Marisa said. She, like Brandi, has come under hot water for comments she made in the past season but she’s still hopeful the network will invite her back for another round with the ladies. “There’s a lot of things I wish I didn’t say but I had fun with it,” she laughed.

In addition to a strong Bravo contingent, Dancing With the Stars alums made a good showing last night at the event. Sharna Burgess and Peta Murgatroyd dished on their partners, Andy Dick and Sean Lowe, and Peta even had something to say about all those rumors that she and Sean were more than dancing partners.

“He’s making me very proud. He’s working very hard and doing all the right things to get into that final. We both laugh about this. We’ve made videos about this on Youtube. You can’t find a more humble, down-to-earth person. I can’t say enough nice things about this guy. Catherine is very lucky and he’s a lucky guy to be with her,” Peta said. “Everyone has to act on the dance floor. Sean knows that when he goes out there Monday night he can’t hold back. We are just like brother and sister. It’s so weird people are saying we are hooking up and I’m breaking up their engagement. It’s ludicrous. It’s so funny.”

Sean was supposed to show up with fiance, Catherine Giudici, but they couldn’t make it at the last minute so I couldn’t pose the same questions to him. It does seem like Peta closed the door on the romance rumors though. What do you think? Also, what do you think Brandi’s hot news could be? I’m excited! She always has fun things to spill!