Brandi Glanville’s Tell-All Book Made Into A Lifetime Movie – Who Will Play LeAnn Rimes? 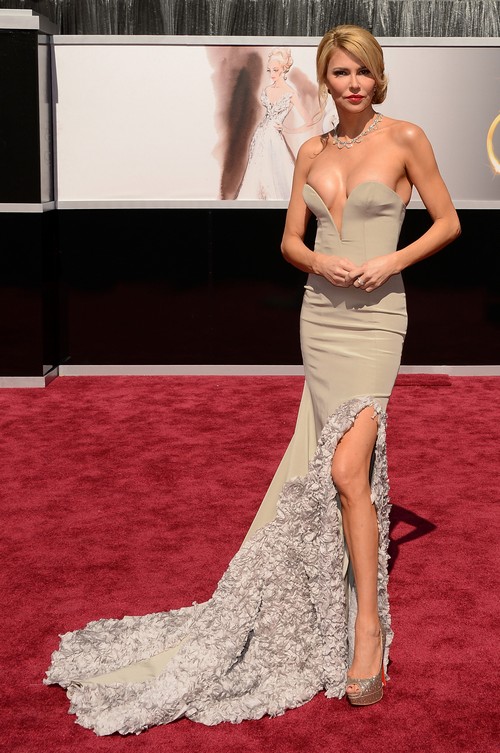 Brandi Glanville is such a big attention whore that she pitched up at the Academy Awards wearing a gown that was clearly crafted in the deepest, darkest corners of purgatory. This “elegant” frock, widely seen as one of the worst dresses at the Academy Awards, covered Glanville’s nipples just enough to force lonely basement dwellers to cancel their World of Warcraft accounts and take up stalking as a hobby.  This death-dress was designed by Glanville, but we are currently uncertain whether Glanville suffered a mild stroke whilst crafting this horror and/or whether Glanville didn’t take her height into account, because, you know, her brain is a pimple.

As this horrific creation shimmied on the red carpet, other life changing events happened in Glanville’s life. (No, you silly, they didn’t find a paranoid stalker in her room!) Before the Academy Awards, while Glanville was drunk out of her mind and sucking on gas station straws, she tweeted that her tell-all book will be turned into a movie. She even said that it should be “pitched to Lifetime” and should be made into an “un-romantic comedy”.

If you’ve been addicted to the Teletubbies and you weren’t able to leave your couch because of “psychic vibrations”, you might not know that Glanville’s ex, Eddie Cibrian, left her for country music star LeAnn Rimes. (If you’re a fan of Rimes and you inherently believe that her cultured voice will cure you of your arthritis, you need to stop reading now and tend to your pain).

Glanville’s life story, obviously filled with Rimes’ Coyote Very Ugly face and Cibrian’s soothing sexuality, will become a hot Lifetime movie bathed in ostentatious acting and labored lip-locks – the perfect combination for any teary-eyed housewife making potato salad for ten. The casting will, in all probability, be a bigger bitch than Tyra Banks, because there aren’t many Rimes lookalikes in society. (They could always visit Hell, and/or Rosie O’ Donnell’s house, to find the perfect fit for the role of Rimes). A film, dressed in Glanville’s Oscar gown, and parading around like a Tina Turner wannabe at a tribute concert, could – according to scientific methods – bring tears to quasi-intellectual suburbanites with Botox injections on call. The rest of society, however, will see it as we do – a pity party for one; no invitations sent.

After all is said and poked, if Glanville ever steps out on the red carpet wearing something similar to the above mentioned Basic Instinct-nipple-gown, she needs to be strapped down and shown all of Rimes’ music videos.