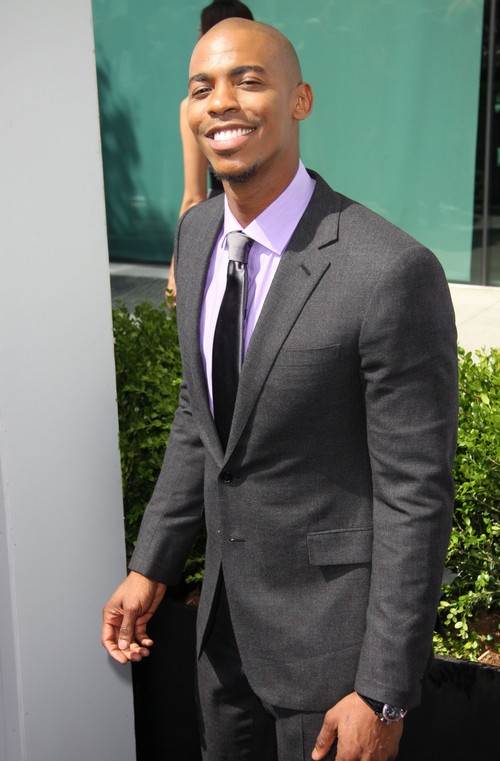 It is not often that one comes across a “celebrity” with such class, etiquette, and elegance as Mehcad Brooks. You might know this remarkable actor from the second season of Desperate Housewives, and the second season of True Blood as “Eggs” – the dude with the scary black eyes. He is currently starring in Necessary Roughness as T.K. King.

According to the official press release, “[Brooks] plays the role of Terrence King, the wild, charismatic, and sometimes stubborn New York Hawks star wide receiver.  We ended last season with TK making the decision to enter rehab and this season things will pick up with TK as he rejoins the team and tries to return to normal life. “

Celeb Dirty Laundry had the exclusive privilege to chat to Mehcad about his role in the show and what stands out as the most important career moment of his life.

What is the biggest life and career lessons you learned on the set of Necessary Roughness?

The biggest life and career lessons I’ve learned on the set of Necessary Roughness. You know, the biggest life lesson I learned is probably also the biggest career lesson that I learned, and it’s probably one in the same, is that no matter what it is and no matter what it is you’re doing, and no matter how it is you may feel day-to-day, never take you know something that you love for granted. And you know, I love this show and I love being on it. And you know – but when you’re in the thick of things sometimes and you know 14-hour days and so on and so forth, you know you can start taking it for granted. And then when we had this – we had a little – you know I don’t know if you guys knew about it, but we had a little scare where you know we didn’t know if the show was coming back or not, and that was really hard on me. That was really tough on me, and then I was sitting at home wishing for these 14-hour days and these – you know, and these situations that were less than you know glamorous and… You know, so I think I just really learned you know, even this – you know, this far into my career, just don’t take it for granted, you know, because it could be gone tomorrow.

What moment in your career stands out as the most memorable?

Oh, man. That’s interesting. That’s a good question. I’ve never been asked that question, but I’d have to say – I would have to say you know winning a SAG award – SAG Ensemble Award with Desperate Housewives. That was amazing. That was just the greatest feeling. And just to know that you’re a part of something that – you know, that people appreciated that much and that your hard work, you know, didn’t go unnoticed, which is great you know. And then I’d have to say – God, that’s interesting. You know what? I – to be completely honest, it would have to be when I found that we got the Season 3 pickup because you know at a certain point I had just kind of given up on it and said you know, “Hey. Had two great seasons and that – you know, it is what it is,” and like I hadn’t really had a show work out past two seasons yet, and that was like a big wall for me. So I was like – when I got that call, like I was jet lagged, getting tired because I’d been traveling around, but I was like – I didn’t care where I was. I started screaming and like, “Yes! That’s right.” So, that was a big moment too, you know. And it’s also nice to know that this far down the line – you know, I’ve been doing this you know professionally for ten years, that you can still have you know moments that are surprising and unexpected, and just completely full of satisfaction and elation. You know, just – it’s great.

What kind of research went into the whole addiction and rehab storyline with TK? Did you do any kind of special research for it?

Oh, my God. I did. I went on like a six month drug binge, and it was crazy.

I – no, I have a couple family members, you know, who are battling with addiction, one I’m not very close to, the other one I’m actually very close to. And so you know like I said, I’ve seen it firsthand and it’s very tough. And you know, it’s – you know, you don’t have to do that much research when it’s right there in your family to tell you the truth, and you know it’s been a long road for my family in that regard. And, I just kind of knew how to portray it accurately and also how to respect you know what people were actually going through.

Necessary Roughness returns to the USA Network on Wednesday, January 23rd at 10/9c, so make sure to tune in and watch Mehcad do what he does best!