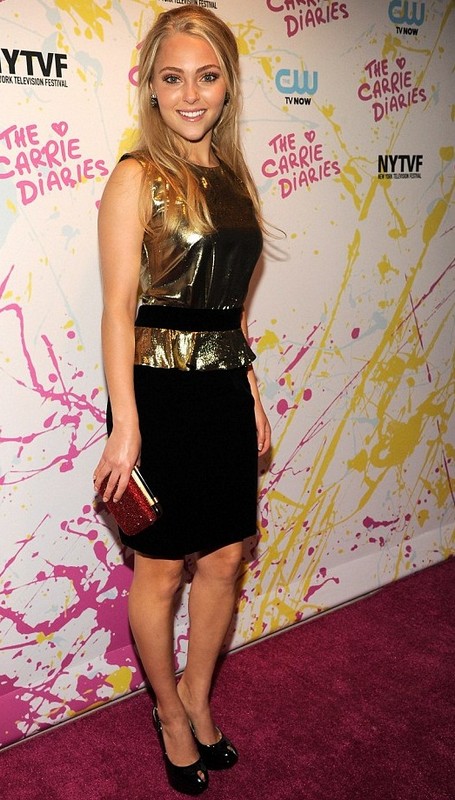 Oh my goodness, Carrie Bradshaw really IS coming back to our television screens this coming January!  I had the privilege of strolling into the School of Visual Arts Theater last night in NYC to see the world premiere of The Carrie Diaries and let me tell you, it’s going to be just as huge as Sex and the City was. No lie. Candace Bushnell originally created the Carrie Diaries as a prequel to SATC, since we all have a good idea of how Carrie’s life ends up, this takes us back to a sixteen year old Carrie, stuck in Connecticut.

The book is great but bringing Carrie back to life with an actress other than Sarah Jessica Parker was going to be really tricky. I walked in hoping to like Anna Sophia Robb as Carrie and within five minutes of her being onscreen I realized that they caught lightening in a bottle twice. This girl IS Carrie. She has latched onto some of SJP’s nuances that make her seem authentic while bringing her own 80’s style, teen girl edge to the mix as well. The opening scene has Carrie ransacking her closet looking for a purse, curls flying slightly less than her floaty white nightgown. This girl turned into the woman that we all love.

The Carrie Diaries is set in 1984 and it feels a lot like stepping into a John Hughes film which is great for someone like me that was raised on that stuff. Carrie and her friends all have rooms filled with vintage stuff that even I forgot about. The soundtrack is strictly a mix of familiar 90’s tunes and the more obscure stuff that you had to be there to even slightly remember.

Let’s talk writing, shall we. Young Carrie does those fabulous monologues that became such a fan favorite. While Candace Bushnell penned the book, Amy B. Harris does a lot of voicing the characters and bringing them to life and it’s fabulous. Just like in SATC, Carrie’s younger group of friends are relatable. We all know someone just like Mouse who is a book nerd that got dumped as soon as she had sex with her boyfriend or Maggie who seems to have a great boyfriend and a cool life until in the end we realize it’s smoke and mirrors. Sebastian is Carrie’s very first young infatuation. He was her first kiss and we’ll get to watch her first love story unfold in this series.

The story itself bops between the crazy high school stuff and dives into serious issues. Carrie’s mom died of cancer a few months earlier and as she says it, “I don’t think anyone is better off without their mom.” The character really is struggling with the loss and her dad is trying to figure out how to raise Carrie and her younger sister Dorritt who is coping by dabbling in drugs.  Carrie’s later life is deeply rooted in her mother’s example. She was a writer and a fashionista. There is a scene where Carrie’s father unlocks the huge closet for Carrie to walk through her mothers things. It’s clearly a huge moment in her young life as she slowly flips through dresses and looks at lines of shoes. Her father hands her a pair of sunglasses to keep that become significant because then Carrie’s mom can stay with her at all times.  She also fights with Dorritt over a purse that Dorritt gets nail polish on. Carrie gets creative and sloshes it with nail polishing before using a bright pink color to write her name on it.

Carrie’s dad decides that she needs something new to help her regroup so he arranges for her to intern answering phones at a NYC law firm once a week. There Carrie falls in love with her first man- Manhattan. Let me tell you, it’s love at first sight! Watching Carrie find her way, while tripping over her own feet and carrying that “Carrie’ purse is just memorable. Anna Sophia plays it all brilliantly and even if you’ve never seen an episode of SATC you know that this girl belongs in the sea of chaos and yellow cabs.  She accidentally bumps into Larissa, an editor for Interview magazine and is within hours introduced to a life of clubbing, with champagne and crazy characters.  The things Carrie loved at 16 are the same things that we watched her loving at 35. The consistency is there and we are just now learning it a bit backwards.

The Carrie Diaries pilot ends in such a comforting (and familiar) way, with young Carrie writing in one of her mother’s blank journals- late at night by an open window.  I wanted to stay and watch more.

I’m telling you, this is going to be one of the best new shows of this season so you need to check it out. If you feel kind of weird about Carrie being played by someone else, you’ll forget quickly and the apprehension will be replaced by joy to see a favorite brought back in a new way. The Carrie Diaries has a lot of back story to tell us and I absolutely can’t wait to tune in!