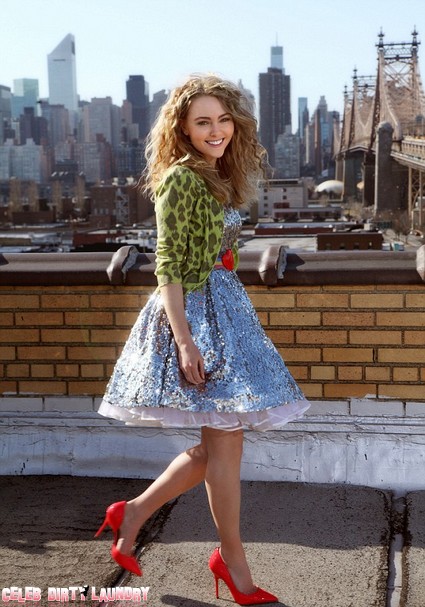 I love Sex And The City. Carrie Bradshaw is like an old friend. So the thought of anyone else except Sarah Jessica Parker playing the iconic New Yorker makes me anxious..But maybe my fears were in vain because this first picture from the new prequel The Carrie Diaries doesn’t disappoint. AnnaSophia Robb really does look like a younger version of our favorite fashionista and columnist.

AnnaSophia has the requisite heels (I don’t think they’re Manolos – but she doesn’t have the pay packet to afford them yet), quirky fashion sense and curly hair. SJP has given ASR (what is it with these initials?) her blessing as Carrie. AnnaSophia told US Weekly ‘She sent me a letter! I wrote her one back, too. She was just very encouraging about it all. It was really cool!. I’ve been watching the show and really trying to click with the character. I know everyone’s going to compare it to Sex and the City, but we’re never going to be that.’

Celeb Dirty Laundry has been following the new show every step of the way Carrie Diaries Gets Green Light . It’ll start in May on The CW – and is mostly set in Connecticut – but is being filmed in New York. It follows Bradshaw’s senior year of high school during the 1980s. So expect plenty of out there 1980s fashion.

AnnaSophia has a lot to live up to. Sex and the City fans (like myself) are passionate about the show. It’s a tough gig but just maybe she can do it. I’ll be tuning in in a couple of months to see how she tackles the role!